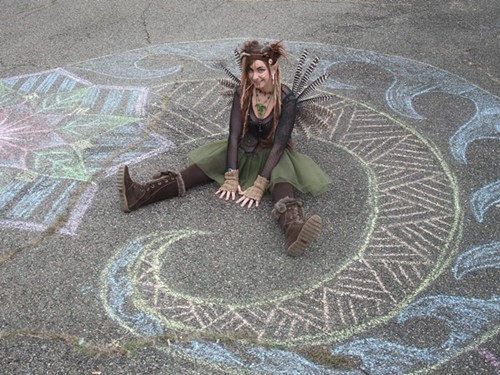 It wasn't all kids. Melissa Ciccocioppo, a graphic and clay artist, came fully dressed as a woodland fairy. “I heard there were costumes and art and interactive stuff and I live close by so why not?” she said, shruggomg. Looking round the Commons, where projects were somewhat sparsely dotted around Lake Elizabeth, she said: “This is good but I feel like there should be more.”
While the whimsical affair was more of a walk in the park gone particularly surreal than an actual arts destination, but it was hard to get through without making some. I was cajoled into joining a drum circle, and when this turned into a rain dance, took shelter in the costume tent. Donning an antlered panda head suddenly seemed a practicality rather than an affectation.
Sheltering with me was volunteer Clifford Reese. “We’re going to do it earlier in the year next time,” he told me. “This was the earliest we could get things approved, and as you can see we’re in a rainstorm right now. We managed to get 27 artists to participate. New York in their sixth year has 200.” He added, "My daughter’s having a nice time and she’s met a lot of other kids to play with."
For a first showing, the festival's projects were endearingly low-fi and welcoming, but it's the children who brought the most to them.
© 2023 Pittsburgh City Paper