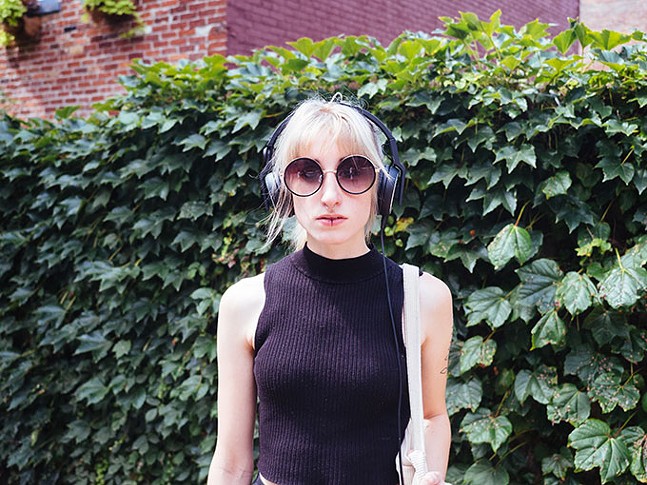 Pop artist and producer Ky Vöss had no intention of living in Pittsburgh. The Austin-native was on a cross-country road trip when her car broke down in the ‘Burgh almost two years ago, forcing a temporary relocation. With little money, no place to live, and no connections in the city, Vöss spent a month sleeping in her car at night and hanging in coffee shops during the day — as long as she had money to purchase a drink to stay. Otherwise, she was out on the street, bracing the cold and wet Pittsburgh fall weather.

While those circumstances may have broken some, it proved as a growing opportunity for Vöss. She decided to make Pittsburgh her home, created a new persona, and channeled her experiences into her first album, Space Cadet, which dropped in May.

“I really fell in love with the goth-ness of the city,” says Vöss. “Those super gloomy rainy vibes really inspired the darkness of the album. It was a really heavy time, [but] I was excited to be in a new place and be allowed to feel things. A lot of the sounds are really deeply influenced by the industrial nature of Pittsburgh.”

Eventually, Vöss’ car broke all the way down and she began couch-hopping until she was lucky enough to receive donations from “a few really cool people.”

“I don’t even know how it happened,” she says, “I had enough to put down a down payment on my first apartment. When I moved in, I just kind of sat on the floor in the middle of the room and cried for a couple of hours. I didn’t have heat there for the first month, and it was December. But I was so, so happy to be in my own space.”

Vöss finally had a home, and she had also found a home in the local music scene. Although at first, just like getting that apartment, it was not an easy task. In Austin, you can walk outside downtown to find shows happening on every block on every night of the week; in Pittsburgh, Vöss had to find out about shows through friends of friends. However, once she figured it out, her induction into the Pittsburgh music scene was swift.

“I started meeting people who were like, ‘Oh, you play music? You should play a show with me,’” says Vöss. “People are so kind here. As soon as they found out that there was a new Pittsburgh musician, I felt very welcomed right off the bat.”

Besides the friendly nature, the diversity in the music scene was another reason Vöss was drawn to Pittsburgh.

“It was a lot more experimental and creative than I was used to, and I found that really inspiring,” she says. “In Austin, it’s a lot more saturated and filled with a lot of artists that just kind of sound the same. It’s great, people are doing what they love, but they seem to stick within a certain cookie-cutter Austin band stereotype.”

Vöss didn’t fit that mold. A classically trained violinist, she started producing after she realized she didn’t need an entire orchestra to make music. Her music is pop, infused with electronic, but is all based on chord structures she’s seen in classical pieces, with lyrics and themes about addiction, abuse, sex work, poverty, and homelessness.

“Every song directly relates to personal experiences that have deeply affected me,” says Vöss. “The final track on the album, ‘Swallow the Batteries,’ is about the process of accepting the trauma that permanently lives in my brain and learning how to coexist with it.”

When Vöss left Texas, it was an attempt to run away from that trauma, her "old self," and upon landing in Pittsburgh, she created the Ky Vöss persona, one that seems like it’s hiding something, yet is vulnerable though art. Looking at Space Cadet’s album cover, or scrolling through Vöss’ promotional photos, her face is rarely seen, covered by her hands, cloth, or scratched out like childhood graffiti in a yearbook.

“It makes creating and communicating through music a lot easier for me,” she says. “When I hide my face, I feel more of a connection to that character. Ky is a coping mechanism and masking myself gives me the illusion of having more room to express myself. … I’ve always wanted anything that I made to be more about the content, and less about the creator.”