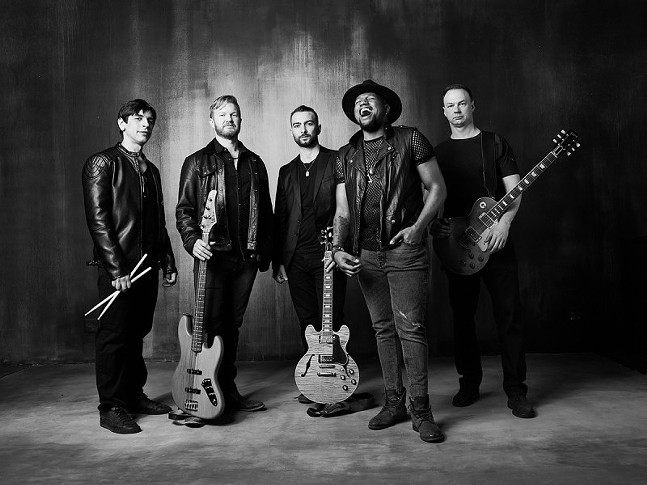 Photo: Ghost Hounds
Ghost Hounds
After more than 15 years, Ghost Hounds has started a thrilling new chapter. In June, the local blues-rock band performed at the Outlaw Music Festival in Burgettstown, alongside well-established acts like Willie Nelson, the Avett Brothers, and Alison Krauss. In July, Ghost Hounds opened for the Rolling Stones at the 82,000-seat FedEx Stadium in D.C. And in October, the band will have an eight-show run opening for rock icons ZZ Top, in addition to releasing its next album, Roses Are Black.

But Tull realized that he missed music and recently reformed Ghost Hounds in Pittsburgh with a fresh mix of talent.

The band’s next performance is Saturday, during the annual Rock, Reggae and Relief festival taking place Downtown, which benefits cancer research. Ahead of the show, City Paper chatted with Tull about changes in the music scene, Pittsburgh's influences, and what's next for Ghost Hounds.

Ghost Hounds started in the mid-2000s in LA and recently, you reignited the band with new members from New York. Why the decision to be based in Pittsburgh?
Ghost Hounds is based here because that’s where I live, and most of the band members have migrated here too. We love this city and it’s our home. We’re proud to be a Pittsburgh-based band.

What have you seen change in the music industry since the early 2000s, to now?
Many things have changed, including the way that consumers buy and listen to music, for example, through streaming services today. Social media also has come to have significant influence, and radio formats have narrowed and become more challenging. But the constant is that good music cuts through. Timeless music that resonates finds its path to the fans, regardless of what platform they’re using to digest it.

As far as you have seen, how does the music scene in Pittsburgh compare to that of other major US cities?
Pittsburgh has an active music scene, and a lot of great musicians have come out of Pittsburgh across all genres. For example, Brett Michaels, Rusted Root, and The Clarks, as well as many blues and jazz legends. Fans here seem to really love music, including classic rock.

How do you feel the Steel City has affected the band overall? Whether that be sound or even temperament.
Pittsburgh is a special place. We record, rehearse, and play here whenever we can. And I think the sound of the band and the band’s music fits very well with the heritage and musical taste of the city.

How does it feel, as a semi-new band, to already have gigs opening for Rolling Stones and now ZZ Top?
Certainly very fortunate. We’re big fans of both bands and have a lot of respect for the mark they’ve left on the music industry in their careers. Ghost Hounds has worked very hard to get to a place where these opportunities were even an option, and that hard work seems to be paying off.

Things already seem to be moving fast for Ghost Hounds. Where do you hope to see the band a year from now?
Hopefully following a successful album launch, we will keep having new fans discover the music, and have the opportunity to meet them at shows. Equally important, we truly enjoy playing together. We hope our passion for the music continues to propel the band to further success.