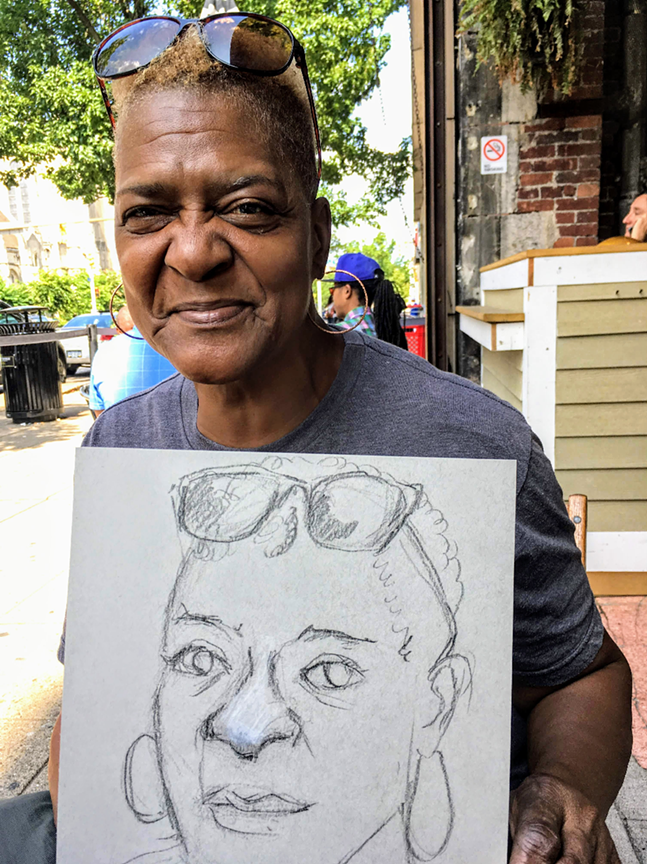 But out of the many, one stands out as the main reason for why Ervin embarked on this project in the first place: using everyday people to reflect what she and others see as gentrification in Pittsburgh neighborhoods.

“One of the people I did a portrait for, she said she had been a longtime resident of Garfield and East Liberty, and she said, ‘I look across the street on both sides and I don’t see anything reflecting me here,’” says Ervin, adding, “I see the portraits of people as a reversal of some of the gentrification.”

Ervin originally launched the project as part of an artist-in-residency program at the Pittsburgh International Airport, where she interviewed and produced portraits of about 60 travelers. She continues it as a 2019 Futuremakers Fellow at Kelly Strayhorn Theater. Starting in May, the program tasked six “creative entrepreneurs” from a variety of disciplines, including music, craft, and installation, to share findings and questions that have emerged through the development of their work.

“Kelly Strayhorn has created this really great program where they’ve kind of helped us along in how to create a community-based art project,” says Ervin.

As part of this, Ervin produced and displayed large-scale portraits at KST, all of which feature text answering two fun questions begged of the subjects: Who would play you in a movie of your life? What would the title of the movie be?

On Fri., Aug. 2, Ervin will give out more portraits at the Futuermakers: Open Labs event at KST’s Alloy Studios during the Unblurred Penn Avenue gallery crawl. She hopes to see people she painted at the event, some of whom she believes have not been invited or felt welcomed to partake in the growing East End art scene.

“One of the things about gentrifying neighborhoods is there’s sort of a cut off between people who have been there a long time and the new culture,” says Ervin. “What I’m hoping is there’s kind of a blending of that.”

Ervin sees Penn Avenue as the project’s main connector and would like to keep extending it towards Downtown over the next year, offering free portraits along the way. She’s also looking for business owners and local developers willing to let her exhibit the portraits in their empty or occupied storefronts.

“I hope to convince some people with property to let me install them,” says Ervin.