CP photo: Jared Wickerham
Stephen Zappala
Allegheny County District Attorney Stephen Zappala has never been a big fan of campaigning when running for the county’s top law enforcement officer. And for just about all of his tenure, he has never really had to. Until this year, Zappala hadn’t faced an opponent since he first campaigned for the job back in 1999.

In a questionnaire for City Paper’s 2019 primary election guide, Zappala wrote, "It has never been the policy of my office to do public statements or press releases when we improved the functionality of the office. ... Publicly promoting improvements in the day-to-day operations of the office in service to the people of Allegheny County seemed more like playing politics than good public service."

But he appears to be turning a new leaf, even though his first campaign event of the general election is leading some to scratch their heads.

As announced on the Young Republicans of Allegheny County Facebook page, Zappala, a Democrat, will be meeting with the GOP group today at Cupka’s Cafe 2 in South Side.

“We are really excited to announce our special guest on Thursday will be....District Attorney Steve Zappala,” reads the July 29 post. “We have invited District Attorney Zappala to speak about his record as DA and important issues facing the city and county.”

During his 2019 primary campaign against fellow Democrat Turahn Jenkins, Zappala didn’t hold any campaign events beside participating in a campaign kickoff party with other countywide Democrats like Allegheny County Controller Chelsa Wagner and Allegheny County Treasurer John Weinstein on Feb. 20, according to his campaign's Facebook page. According to the Pittsburgh Post-Gazette, Zappala also dodged two primary election debate forums scheduled with Jenkins, one put on by 1Hood Media and the other by the American Civil Liberties Union.

Steven Zappala, the DA's son who is running his father’s campaign, justifies the meeting with the Young Republicans because Zappala is on both the Democratic and Republican ballots for the 2019 general election. (Zappala won the Democratic nomination against Jenkins, and secured enough write-in votes to win the Republican nomination as well.)

“The DA welcomes the opportunity to meet with all organizations regardless of political affiliation,” says Steven Zappala. “As the chief law enforcement officer of Allegheny County, Stephen Zappala understands that the office of District Attorney is absent of partisan politics and should be held to the highest ethical standards.”

But just last Friday, Zappala didn’t show to an event in McCandless meant to give Democrats the opportunity to engage with local candidates. Paul Heckman, chair of the McCandless Democratic Committee, says his committee held a “meet and greet” event for Democratic candidates at Devlin Park in McCandless on July 26. Democratic candidates for municipal races attended, and even higher officeholders like U.S. Rep. Conor Lamb (D-Mount Lebanon) and state Sen. Lindsey Williams (D-West View) made an appearance. Heckman said Zappala was invited, but he never showed.

“He never indicated that he was going to show up and he didn’t show up,” says Heckman.

Peduto tweeted last year in response: “This is unreal. How low can this go? Let’s get back to debating issues, not photoshopping lies.”

Young Republican of Allegheny County chair Anissa Coury never apologized for the post, saying it was made in jest, and refused to take the photo down from Facebook. 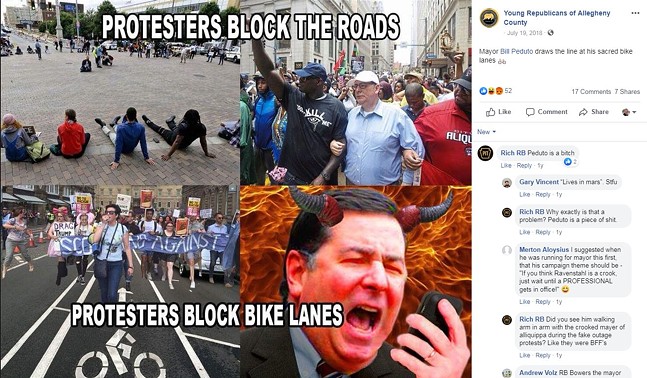 District Attorney Zappala could also be facing some push back from his general election challenger in public defender Lisa Middleman, who is running as a progressive-minded independent. Middleman is kicking off her campaign today in Millvale at the same time Zappala is scheduled to meet with Republicans. Middleman says she hopes Zappala’s new openness to campaigning means she will meet with her in public and give all voters a chance to compare their campaigns.