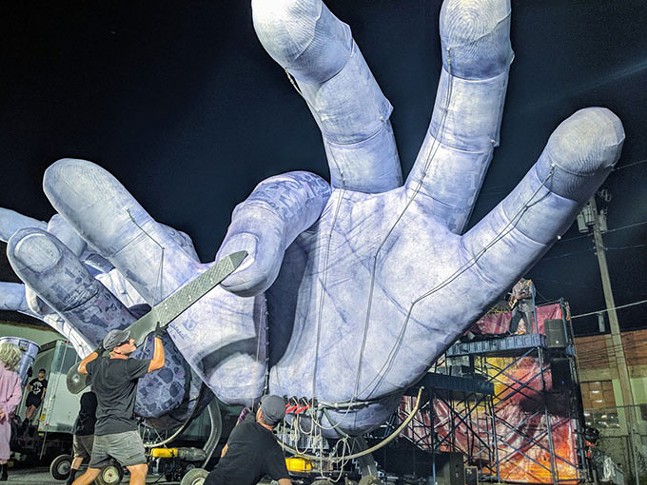 Photo: Sarah Doccolo
One day in mid-July, Steve O'Hearn was wondering if his hands were maybe just a little too big. As co-artistic director of the Pittsburgh-based art collective, Squonk, O'Hearn had spent the previous night rehearsing for his group's new production, which was set to debut in Baltimore 48 hours later.

The show, Hand to Hand, involves a multi-tier stage with musicians flanked on either side by giant purple hands "the size of a house," towering over the technicians and audience below. He was exhausted. Everybody was. The hands weighed somewhere between 500 and 600 pounds apiece and reached 25 feet in the air while extended. Maybe 20 percent smaller would have been better. Maybe 300 or 400-pound hands, somewhere around 20 feet high, with maybe fewer functions, maybe that would have been easier.

But "easy" isn't really Squonk's thing. Its thing, if it has one, is kind of the opposite. It's an approach that happily embraces difficulty. The work is ambitious and silly, like something a smart child would build from a Lego set mixed in with pieces from a thousand other toys. For more than two decades, the group has specialized in performances that are flamboyant, dreamy, and avoid linear narrative. They mix light shows, dancing, costumes, and a semi-steampunk collection of clashing art forms. The music is jam-band prog, mixed in with metal and the occasional bagpipes or accordion. The effect is a kind of confusing calliope show that's not really about anything in particular but inspires awe in its audience just for existing. That sort of showmanship doesn't come easy.

But still, wouldn't slightly smaller hands have the same effect?

Probably not, says O'Hearn. It was just the fatigue speaking. This show is all about power and scale, according to O'Hearn and Squonk co-artistic director/composer Jackie Dempsey. The idea for Hand to Hand emerged in the aftermath of the 2016 election, at a time when many Americans were feeling, if not despondent about the political implications, at least confused and shocked that something experts were so sure wasn't going to happen could happen. Squonk's work is too otherworldly to ever be bogged down in the nitty-gritty of politics, but O'Hearn was clearly blindsided and upset by the result.

"[After the election], you have the instinct as an artist to do something horrifying and dystopian, the kind of thing that happens in grad schools around the country," says O'Hearn. "But that’s not what we do well. Our struggle with this show was how to respond to that in a gracious and celebratory way — because it’s not naturally a gracious or celebratory situation." 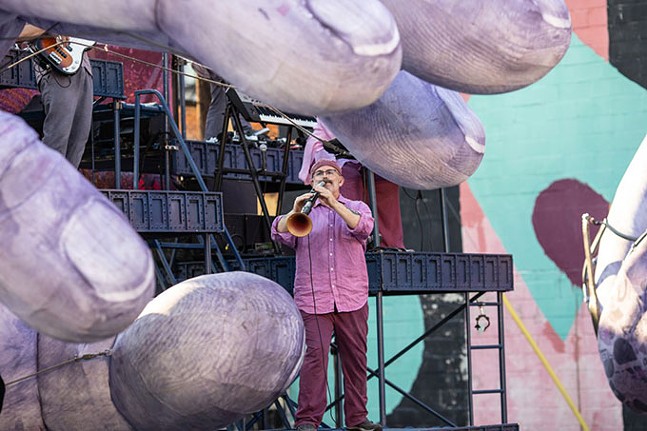 Photo: John Altdorfer
So then there's this idea of power and scale and eventually, hands. O'Hearn and Dempsey started discussing how hands represent power and how the imagery of performers dwarfed by these giant, otherworldly hands could convey powerlessness. The show, says O'Hearn, is horrifying and comic, which are two things Squonk does well.

Back to the hands. About two years ago, after the initial storyboards were drawn up, Dempsey started composing the music and Squonk guitarist David Wallace started working on a design for the back of the hands. The internal rigging and gimbal carriages for operating the hands were planned and executed by technical director Todd Nunn, but for the hands' initial build, Squonk reached out to a company called Air Works. The Dutch firm is known for bringing wildly imaginative stage props to life, and O'Hearn says, is probably the only company on earth that could do the hands right. They collaborated for months on the design of the structure, plus the physics of how the fabric, steel, rope, and air would allow the hands to be controlled by Squonkers.

Air Works did not disappoint. The hands rotate and move with eerie fluidity. The fingers are controlled individually with ropes and the thumbs are removable. At one point in the show, in a play on "opposable thumbs," the thumbs break off from the hands and the two guitarists operating them engage in a faceoff. Like everything Squonk does, the silliness of that scene undercuts the grandiosity of the vision, which allows the audience to stop trying to make sense of it and just accept the entertainment for what it is.

"We aren’t people who lecture," says O'Hearn. "We do big flamboyant things, musically and visually, and that’s what we’re going to do. Hopefully what happens is the audience feels joined by that, and not powerless."

Editor's note: Hand to Hand was scheduled to get its Pittsburgh premiere at the Three Rivers Regatta, which has been canceled. Its new location is PPG Plaza.
© 2022 Pittsburgh City Paper