CP photo: Sebastian Foltz
Conor Lamb
Pittsburgh’s Colcom Foundation has been under scrutiny lately. Immigrant groups requested that the name of the foundation be removed from the Pittsburgh Holiday Market last December after they discovered Colcom’s large donations to anti-immigrant groups.

And last month, Pittsburgh Post-Gazette wrote two features on Colcom, digging into the foundation's increased funding to anti-immigrant groups like the Federation of American Immigration Reform (FAIR), and the growing influence those beneficiaries have over the immigration policies of President Donald Trump.

The Colcom Foundation markets itself as an environmental organization and gives millions to local environmental causes, but the majority of its funding goes to immigration-restriction groups, including some that have been deemed hate groups by the Southern Poverty Law Center.

Colcom Vice President John Rohe asserted to the P-G that the increased funding to immigration-restriction groups, like FAIR, had nothing to do with Trump, and Rohe described himself as a “life-long Democrat.”

But a recent campaign by FAIR paints a different picture, and that includes attacking a local Democrat in U.S. Rep. Conor Lamb (D-Mount Lebanon).

Screenshot from Twitter
Lamb's vote in question was for the Dream Act, which passed the U.S. House last month with unanimous support from Democrats, and a small group of Republicans. The bill would grant a path to citizenship to DACA-recipients and TPS holders, as long as they follow a set of criteria.

Regardless, the FAIR attack ads don’t mention any details of the bill, which is meant to provide citizenship to undocumented immigrants who were brought to America when they were young children and immigrants who were granted temporary asylum at some point. Instead the ads attempt to equate support of that bill with responsibility for the migration situation currently happening at the U.S.-Mexico border.

The Dream Act would only apply to immigrants who have been continuously in the U.S. four years before the act is signed into law.

The Lamb campaign did not respond to a request for comment.

And the attack was not just directed at Lamb. City Paper found seven other promoted tweets from FAIR with the same attack ad. All the tweets tagged House Democrats in districts that were flipped from Republican control in 2018. All Democrats targeted are in districts deemed competitive by the Cook Political Report. Also many of the Democrats targeted, including Lamb, have a fairly moderate voting record when it comes to immigration, sometimes siding with members of Congress who support immigration restrictions. 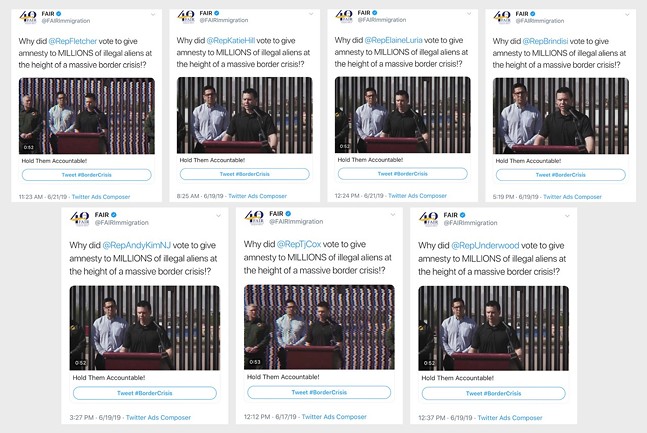 “Colcom Foundation supports public education for an informed dialogue on the long term sustainable level of immigration in a pro-immigrant, racially-neutral manner,” says Rohe. “In our deliberative democracy, this is increasingly being recognized as an important conversation.”

FAIR is considered a hate-group by the Southern Poverty Law Center because, according to SPLC, they have lobbied for laws focused on “fomenting fear, on exploiting racial tensions and economic anxieties to convince people that they had better not let any more ‘aliens’ into their country.” FAIR was founded by white nationalist John Tanton, who also has close ties to Colcom.

Rohe adds that Colcom provides general funding to nonprofits “commonly funded by thousands of other persons and entities.”

In 2016, tax documents show that Colcom gave more than $7.1 million to FAIR, which was about 70 percent of FAIR’s grant funding that year. According to P-G, Colcom has given FAIR more than $40 million from 2013 to 2018. Colcom’s donations to FAIR have sharply increased under Trump’s presidency.

According to campaign finance reports, Rohe has only personally donated to two federal politicians in the last 10 years. One was Gary McDowell, a conservative Democrat from Michigan who campaigned on increased border security and cracking “down on employers who hire illegal immigrants.” The other was former U.S. Rep. Lou Barletta (R-Hazleton), who used to be a FAIR board member, and has run almost all of his campaigns on being fervently anti-immigrant.

Luckily for Lamb, Pittsburghers don’t seem to be buying the attack ad. Dozens of people replied to the tweet saying they were proud of Lamb’s vote.


Because he understands humanity and compassion, and i was proud to volunteer for him. So bite me @FAIRImmigration