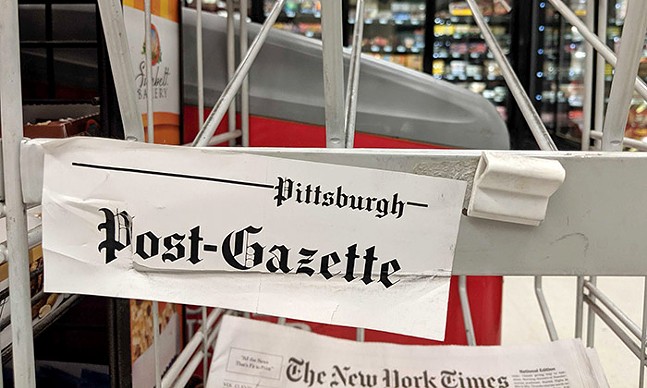 In August 2018, the P-G cut Tuesdays and Saturdays from its print schedule. With these announced cuts, the P-G will only print three days a week. Since the Pittsburgh Tribune-Review ceased printing within the city of Pittsburgh, the city will eventually be without a traditional newspaper for four days every week.

According to a letter that guild chairman and P-G reporter Jonathan Silver shared on Twitter, the cuts will take place on Sept. 30.

More bad news: ⁦@PittsburghPG⁩ today has notified ⁦@michaelafuoco⁩ and ⁦@PGNewsGuild⁩ that it will cut TWO MORE DAYS OF PRINT on Sept. 30, meaning we will print for home delivery only three days a week. Unclear which days will go in this all-digital strategy. pic.twitter.com/IqrNr3Nxdk

According to the letter, P-G management is making this decision to continue its push to "become a digital news organization." It is unclear which days will be on the chopping block. Silver called this development "bad news."

The Newspaper Guild tweeted in response to the news: "Another bad decision from a company that continues to show zero respect to employees or readers."

P-G management has been in a years-long labor battle with the guild. Union staffers have not received a raise in more than 13 years and are currently working without a renewed contract. The conflict reached a bit of boiling point in February when P-G publisher John Block threw a tirade in the P-G newsroom.

In response, the Newspaper Guild filed a complaint with the National Labor Relation Board. Adding to that dispute, the guild has also taken issue with several editorial decisions made by new Executive Editor Keith Burris.

This year, despite these controversies, the P-G won a Pulitzer Prize for its reporting following the Tree of Life shooting.
© 2023 Pittsburgh City Paper