"The Allegheny, they've just written it off as an extractive forest. It's being liquidated." 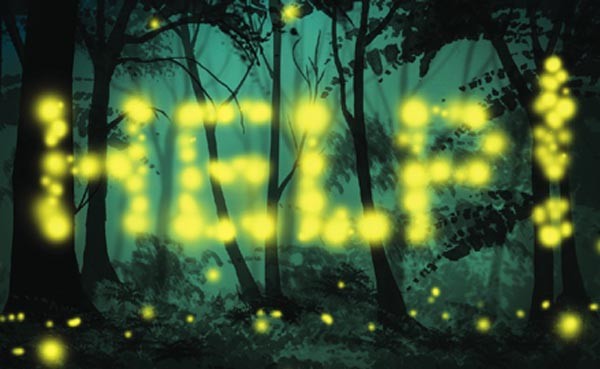 Everyone's seen fireflies. But odds are you haven't seen them like this: On a wooded night-time hillside along a creek, 100 or more of the insects float through the air, blinking on and off. Patterns of light emerge, a rising and falling wave of silent, slow-motion fireworks glowing in subtle shades of white and orange. It's a seasonal mating ritual, and in the woods' deep quiet, it's beautiful.

Then, abruptly, all the fireflies — all of them — go dark. It's pitch black. The sudden darkness is as mesmerizing as the light show itself, like a power failure interrupting a wild party. The blackout lasts several seconds. Then the first few fireflies spark, and the cycle begins anew.

The scene occurred in late June, deep within Allegheny National Forest. There, researchers have confirmed the existence of these synchronous fireflies, a phenomenon previously verified in North America only in the Great Smoky Mountains of Tennessee. The find, about three hours' drive north of Pittsburgh, suggests the untold species diversity the ANF might harbor.

"I think we're in the epicenter of these little buggers," says Lynn Faust, the Tennessee-based biologist who led the research team. "This might be where they're all coming from."

But for the environmental activists who first noted the fireflies last summer, the insects mean something else, too: a chance to spotlight the industrialization of Pennsylvania's only national forest, a hotbed of logging and gas drilling. 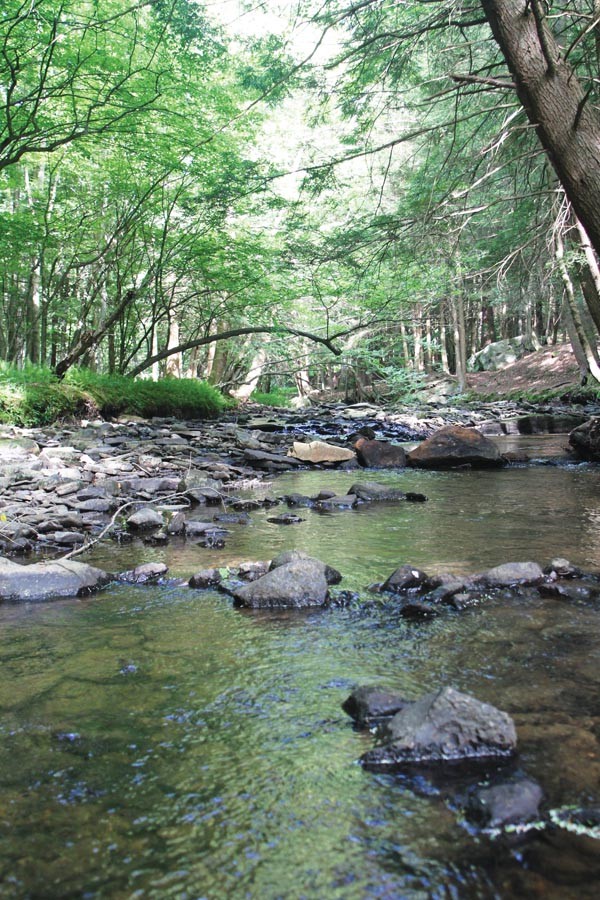 Photos by Bill O'Driscoll
Page 6: This section of Branch Creek, in Allegheny National Forest, was good for watching synchronous fireflies in late June.

The original firefly sighting, for instance, occurred both within the boundaries of a proposed logging project and about half a mile from a proposed natural-gas well. Located on a ridge a half-mile away, the proposed well is a joint venture of SWEPI (a subsidiary of Royal Dutch Shell) and Pennsylvania General Energy.

Cathy Pedler, of the Allegheny Defense Project, learned of the well last November, shortly after the U.S. Forest Service's Allegheny Resource Advisory Committee, on which she sits, approved funding for the firefly study. Concerned about the site and its timing, she says, she confronted PGE general counsel Craig Mayer. Mayer, who's secretary of the Pennsylvania Independent Oil & Gas Association, also sits on the committee.

Pedler says Mayer first refused to answer, then said "he was sure there were geologic reasons" for the siting. Reached for comment last week, Mayer, speaking as a representative of PIOGA, said the "suspicion and conjecture" that the siting was related to the fireflies is "simply preposterous."

But industrialization doesn't threaten just these fireflies. "It's destroying every potential use of the forest," says Pedler, among the first people to note the fireflies. Water quality and intact habitats are declining, Pedler says — putting at risk hunting, fishing and camping, as well as the nascent pastime of firefly-watching. 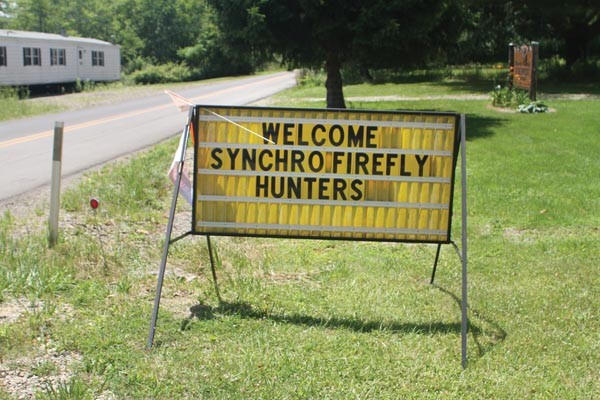 Photo by Bill O'Driscoll
Page 7: Firefly researchers were greeted at the Kellettville bed-and-breakfast where they lodged.

Fireflies are not actually flies, but winged beetles. All firefly larvae glow, but only half the species light up as adults — a life-stage that lasts just a few weeks. The males fly around glowing for females stationed below, and that's (almost) the last thing fireflies do before they die.

North America has about 150 species of firefly, but until two decades ago, none were known to blink synchronously. In 1992, Faust, who'd grown up in rural Tennessee watching the firefly called Photinus carolinus do its choreographed light show, read that synchronous fireflies didn't exist in the Western Hemisphere. She contacted researchers, who confirmed her observations. Now, in season, Great Smoky Mountains National Park draws 1,000 tourists a night to observe the bioluminescent spectacle.

Faust, now a well-known researcher herself, led the international team of five firefly experts who visited ANF in June. Their search centered on a roadside campsite along Branch Creek, where Allegheny Defense Project members first saw the fireflies last year. 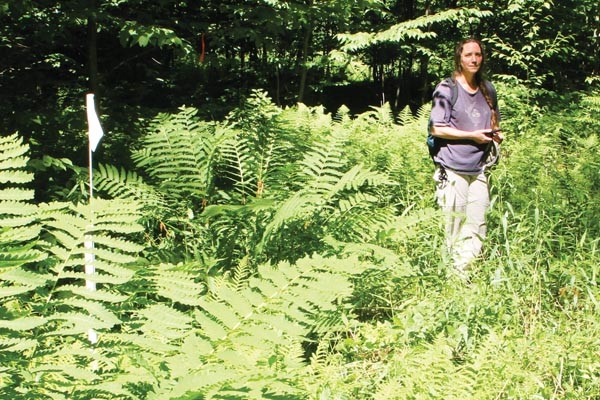 Photo by Bill O'Driscoll
Page 8: Cathy Pedler of the Allegheny Defense Project stands on the site of a proposed gas well in Allegheny National Forest.

In just a few days in the ANF region, the researchers identified at least 15 firefly species. "It's amazing how many species are around here," says researcher Raphael De Cock, an ecologist from the University of Antwerp, in Belgium. All of Central Europe has just three, he says.

And compared to Tennessee's synchronous fireflies, Pennsylvania's are quite widespread. "In Tennessee they are restricted to a certain area, but here they are all around," says De Cock.

"A lot of people are saying, ‘Yeah, come to my house, I see them all the time,'" says Peggy Butler, who co-owns the bed-and-breakfast where researchers stayed. Indeed, volunteers whom the Allegheny Defense Project invited to the ANF to record firefly data also reported seeing synchronous behavior north to New York. And Faust herself had previously observed such displays in Butler County, where she has family.

Quipped De Cock, "People travel from here to Tennessee to see synchronous fireflies, and here they are in their own backyard."

Still unconfirmed, pending DNA tests, is whether Pennsylvania's synchronous fireflies are carolinus. "If it's not the same species, it's very similar," says Faust. A report is due in December.

Pedler wants the fireflies to become an attraction, and scientific attention can't hurt. "We're gonna get those researchers back every year," says Pedler. "That's my goal."

While some firefly species thrive in cities, Photinus carolinus is especially light-sensitive; too much ambient illumination prevents the insects from seeing each other, researchers speculate. Meanwhile, because some larvae live underground, fireflies are sensitive to soil health. Carolinus also requires vegetation thick enough to provide darkness at night, but underbrush scant enough that males can see each other to synchronize. (They go dark together so females below can flash their replies.)

"Worldwide, fireflies are in trouble just because of habitat destruction and light pollution," says Faust. She calls fireflies an "indicator species." "When you have them, something's being done right [environmentally]," she says.

But environmentalists say the health of the Allegheny National Forest is in jeopardy. 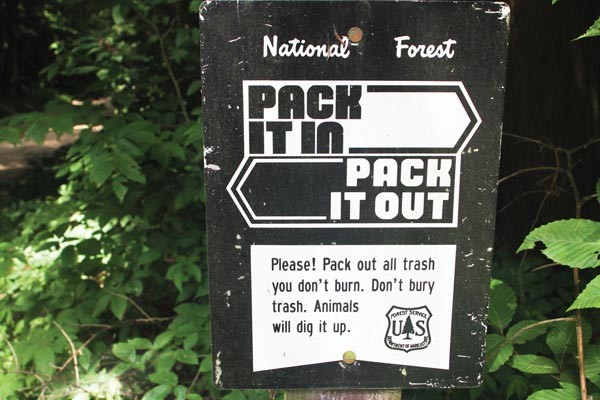 Photo by Bill O'Driscoll
Page 9: Logging and oil and gas drilling are permitted in the Allegheny — but make sure you pack out your bottlecaps.

Sprawling across Northwestern Pennsylvania, the ANF was created in 1923, following the region's near-complete deforestation. Much of its 513,000 acres are now thickly wooded. But those woods are overseen by the U.S. Forest Service, which as part of the U.S. Department of Agriculture manages much of the ANF to attract lumber firms, to whom it sells logging rights. Moreover, 93 percent of the mineral rights in the ANF are privately owned — facilitating exploitation by gas drillers, especially in the midst of the shale-gas boom.

Conservation groups worry about the impact of drilling and logging in the ANF; the Western Pennsylvania Conservancy has gone so far as to buy mineral rights on some tracts and donate them to the Forest Service, says Charlie Bier, the group's director of conservation science.

Allegheny Defense Project members are more vocal. "The Allegheny is the most heavily industrialized national forest in the country," says ADP board president Bill Belitskus, a vocal opponent of gas drilling from nearby Kane, Pa.

"The Allegheny, they've just written it off as an extractive forest," says Pedler. "It's being liquidated."

More than half the forest falls under the Forest Service's policy of "even-aged management," in which tracts are selectively logged and reseeded so commercially desirable trees have the same "pole size" for easy harvesting. The ADP calls this "serial clear-cutting," done to maximize maple and black cherry, hardwoods popular with the furniture industry. (The Forest Service rejects the clear-cutting label.)

Management practices also include widespread herbicide application. One proposed 15,000-acre project that includes the campsite where the fireflies were first seen would sanction selective thinning and other activity nearby.

Meanwhile, the forest is home to more than 12,000 oil and gas wells, most of them active. The Forest Service has minimal control over the siting of drilling operations, hundreds more of which are approved each year. And like logging, drilling often requires the construction or expansion of forest roads, which fragment animal habitat and pollute streams with runoff. That threatens species including the northern flying squirrel, northern goshawk and timber rattler, according to Forest Service reports. A battle over whether the Forest Service should have more oversight of drilling — initiated by a 2009 settlement between the Forest Service and ADP and other environmental groups — is making its way through the courts.

Reached for comment on whether extractive uses of the Allegheny are privileged over other uses, Allegheny National Forest spokesperson Kathy Mohney says that the Forest Service's mission is "managing all of [the forest's] resources for future generations," including the provision of timber and permitting access to subsurface mineral rights. (Mohney declined to comment on reports of synchronous fireflies.)

More drilling seems the Allegheny's fate. One Forest Service planning document suggests that eventually, some two-thirds of the forest could be pocked with wells located some 500 feet apart. (Wells spaced that closely would likely be conventional, shallow wells, not larger, hydrofracturing operations seeking shale gas.)

Meanwhile, whether the Allegheny's fireflies can become a tourist draw will have to await their return, next June. Lynn Faust, the researcher, is hopeful. "It ought to be pretty uncontroversial to sit out in the woods with your friends and your family and enjoy something that's natural," she says. "Fireflies just bring people together."