The latest chapter for a misunderstood word 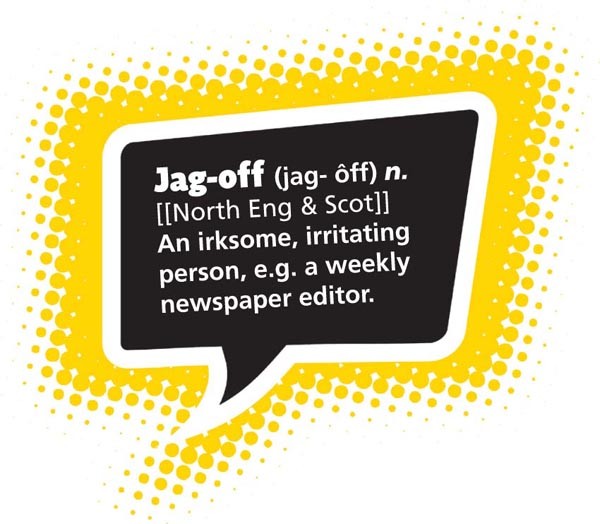 Forget, if you can, the fact that the city's leading daily newspaper endorsed Tom Corbett for governor. Set aside your feelings about its knuckle-dragging columnist Jack Kelly. There are, for the record, no jagoffs at the Pittsburgh Post-Gazette. Executive Editor David Shribman has banned them ... at least by name.

"The word ‘jagoff' has no place in the Post-Gazette," Shribman wrote in a May 31 email to staff. "No jagoffs in the newsroom, none in the paper and none online, please.

"Yes, I know I didn't grow up here; and yes, I know it doesn't mean what some people think it means," added Shribman, who acknowledged hailing from "the Puritan stronghold" of Salem, Mass. "Even so, the ruling stands.

"Have fun making fun of this."

And because there are jagoffs in every newsroom — no matter what the stylebook says — some of them did. That's how Shribman's email ended up at City Paper.

But what if jagoffs are simply misunderstood?

As Shribman's email suggests, many people assume the word is a corruption of "jack off." Such was the case with jagoff's contribution to world literature: a paragraph-long passage in Three Bricks Shy of a Load, Roy Blount Jr.'s profile of the 1970s Steelers:

I never heard the word "Jagov" so often in my life as I heard it in Pittsburgh. There was an iron imperative not to be accounted a Jagov. The word is "jack-off," but in Pittsburgh it sounded like a Russian name. ... "Are you just jagging me off, or do you mean that?" a reasonably nice young woman in Pittsburgh ... might say, without any apparent awareness of the root sense of the term. ...  If a lady wouldn't talk to him in a bar, a Pittsburgher might well walk off grumbling, with a hint of desperation, "I'm a Jagov, right?" Pittsburgh tended to be thought of even by many of its citizens, with a certain strange pride, as a loser's town.

In fact, jagoff  has its roots in the northern British Isles, "where most of the original English-speaking settlers in this area came from," says Carnegie Mellon University professor Barbara Johnstone, the foremost expert on local speech patterns. There, the verb "to jag" meant "to prick or poke" — which is why thorn bushes are called "jaggerbushes" hereabouts. A jagoff, similarly, is simply an annoyance.

"Nobody thinks of these derivatives of ‘jag' as obscene," Johnstone notes.

So why the confusion? Johnstone suspects it arises from the conflict between "the old Pittsburgh versus the new," and the fact that new Pittsburgh often waxes nostalgic over a history it doesn't fully understand.

For many years, she says, Pittsburgh speech patterns were inherited "in unselfconscious, traditional ways" — passed down by working-class people who didn't realize they had an accent. But as older generations age and the industrial past fades, she says, the use of "Pittsburghese" has become more self-aware ... and less self-assured.

These days, Pittsburgh no longer thinks of itself as "a loser's town" — in the wake of the Great Recession, we're better off than a lot of places — but the strange pride remains. We have a seemingly bottomless appetite for celebrating our own quirks; one of the things that sets Pittsburghers apart, it seems, is our desire to set ourselves apart. Rick Sebak's loving, and beloved, local documentaries are practically in 24-hour rotation on one of WQED's digital channels, for example. And the "Pittsburgh Dad" series of online comedy sketches has gone viral — no doubt in part because it reminds people of the days when Pittsburghers actually talked like that.

But increasingly, that Pittsburgh accent survives mostly as a handful of expressions — like "n'at," "yinzer" and "jagoff" — frequently taken out of their working-class context. As Johnstone has written, more and more the Pittsburgh accent "exists only in talk about talk" or in "oral parodies."

Take the Post-Gazette article that will, apparently, be the paper's final use of the word "jagoff," a May 31 story about former Pittsburghers yearning for hometown cuisine:

Other than "Here we go, Steelers," here's the most common rallying cry of the displaced Picksburgher:

If you're like me, "jagoffs" may be the only word in that passage that doesn't make you wince.

Personally, I've always liked the word jagoff: An online newspaper archive search suggests that since 2004, I've used it almost as much as the entire P-G staff put together. For a long time I thought that, like a lot of things Pittsburgh, it had a nice way of flattening pretension. But ever since last winter, when I saw a billboard boasting "Yinzers save with Nationwide insurance," I've wondered whether our fixation on the local dialogue is itself a pretense. How long, after all, can we boast about our "authenticity" before we start sounding inauthentic?

So maybe Shribman was right. Or maybe I'm just being a jagoff. Either way, I guess, I don't have to worry about being called out for it in the Post-Gazette.