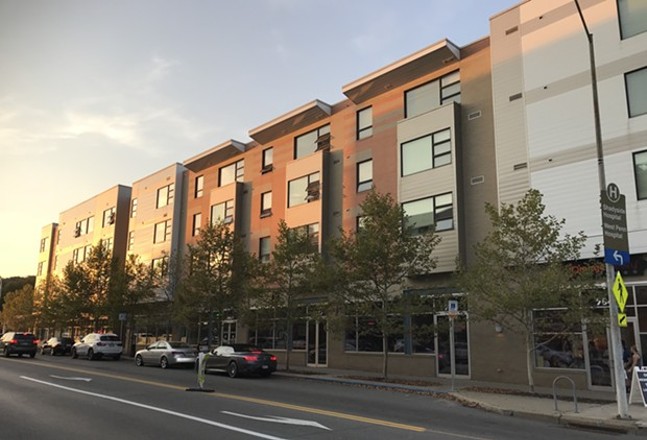 CP photo: Ryan Deto
Mix-use affordable housing in East Liberty
Thanks to the extension of a cap in the recently passed Pennsylvania state budget, Allegheny County is likely due for hundreds of thousands of dollars, potentially over $1 million, in additional funds for affordable housing come the next fiscal year.

According to the Pennsylvania Capital-Star, the Pennsylvania Housing Affordability and Rehabilitation Enhancement Fund (PHARE) cap has been extended from $25 million per year to $40 million.

PHARE is funded by the state’s realty-transfer tax, impact fees from Marcellus Shale natural-gas drilling, and money from the federal National Housing Trust Fund. PHARE provided funding for more than 130 projects in the 2018 budget, including 12 in Allegheny County.

The cap only applies to money collected from the state’s realty-transfer tax, which collects 1 percent of every property sold in Pennsylvania. Total PHARE money awarded in 2018 was $26.6 million, but would have been $9.1 million higher without a cap.

Phyllis Chamberlain, director of the Housing Alliance of Pennsylvania, lauded the legislation to extend the cap. She told the Capital-Star extending the cap doesn't fix Pennsylvanian’s entire affordable-housing crisis, but it will make a “significant dent.”

“Every day, organizations at the local level are making it possible for more of Pennsylvania’s families to access a home of their own through rental housing and homeowner opportunities and for local leaders to demolish and rehabilitate blighted properties,” said Chamberlain in a press release. “This will be even more possible because of the General Assembly’s action to increase funding for the state housing trust fund.”

Allegheny County received about $2.7 million in funds for projects including a Wilkinsburg Community Land Trust, the Mellon Orchard Affordable Housing Development in East Liberty, and the McKeesport Cultural District Revitalization Project. That total is about 10 percent of Pennsylvania's total PHARE allocation.

Pittsburgh still has a shortage of tens of thousands of affordable units for low-income residents, and has been implementing multiple strategies to combat the affordable-housing shortage and gentrification, including the creation of Community Land Trusts and a city-wide affordable housing trust fund, as well as considering an inclusionary zoning policy for Lawrenceville.

Aside from Allegheny County, PHARE funds also help many Southwestern Pennsylvania counties, and state Sen. Elder Vogel (R-Beaver County) who co-sponsored the bill to extend the cap is pleased that his and other Pennsylvania communities are getting more funds.

“PHARE has been a success story for communities in Pennsylvania since day one,” said Vogel. “I am glad to see this program expand because it provides flexible resources for all of Pennsylvania’s communities to meet their own unique needs.”
© 2021 Pittsburgh City Paper