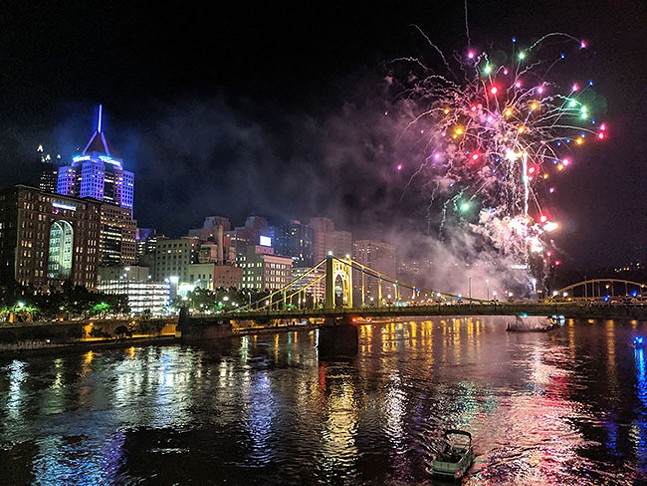 Pittsburgh’s love of fireworks is well documented. Whether it is Light Up Night or the nation’s biggest fireworks day, the Fourth of July, the Steel City excels in lighting up the sky with pyrotechnics. According to KDKA, there are at least 20 firework displays that will explode across the Allegheny County sky Thursday night if the weather cooperates.

But with the annual celebration coming on the heels of a few weeks of particularly bad news about Pittsburgh’s air quality, the question should be raised: Are fireworks making things worse for a city with some of the worst air quality in America?

Albert Presto, an associate research professor at Carnegie Mellon University’s mechanical engineering department and an atmospheric pollution expert, says the answer is yes, but only in the short term. Fireworks do release harmful fine particulate matter, which has been linked to health problems like asthma and heart attacks, into the atmosphere when they burn.

But the amount released by a fireworks show isn’t significant enough to be a cause for worry, Presto says.

“The way a firework works, the reason it’s sparkling is that you’re burning something. There’s usually metal in the firework, and that’s what causes the colors, as the metal gets really hot,” says Presto. “So you get a little bit of particulate matter from shooting off fireworks, but it’s not a big concentration change.”

A 2015 study in the journal Atmospheric Environment found that levels of particulate matter across the U.S. increased by an average of 42 percent on July 4. Out of 315 air quality monitoring sites studied, 10 recorded a level of particulate matter deemed “dangerous” by the EPA after Independence Day celebrations.

An EPA statement issued in response to the study recommended sensitive groups sit upwind from fireworks.

“Short-term exposure to fine particle pollution (hours to days) can pose health concerns, especially for groups of people more sensitive to PM2.5 [particulate matter] pollution,” the EPA wrote. “So we caution those people to enjoy fireworks from a distance, and from upwind, to reduce their exposure.”

“You get a little bit of particulate matter from shooting off fireworks, but it’s not a big concentration change.”

EPA data from the past two years shows that although most monitoring stations in Allegheny County recorded increases in particulate matter in the air around July 4 and 5, the change was a small one. The levels on those days stayed within the EPA’s 24-hour standard, meaning the air quality was not affected significantly.

Compared to the December fire at U.S. Steel’s Clairton Coke Works plant, which likely contributed to numerous pollution spikes that exceeded EPA standards in Allegheny County, the impact of fireworks on Pittsburgh’s air quality appears small and brief. Long-term polluters like the Coke Works plant have a greater effect on health issues, like childhood asthma rates, according to a Duquesne University study.

While Pittsburgh might avoid wide-scale pollution from fireworks, more densely populated areas aren’t so lucky. Celebratory fireworks set off in Delhi during Diwali festivities frequently leave the Indian city coated in thick, unhealthy smog. India’s supreme court banned firecracker sales ahead of the festival in 2017, but couldn’t prevent a night of fireworks that caused air pollution levels to rocket to 18 times the healthy limit.

Still, Presto reiterates that no one in Pittsburgh really needs to worry about their respiratory health when they go to a fireworks show.

“How long is a fireworks show?” Presto asks. “Half an hour, an hour? Even if it’s one hour out of every week, like on the Pittsburgh scale of fireworks-happiness, it’s not really going to push the needle that much.”