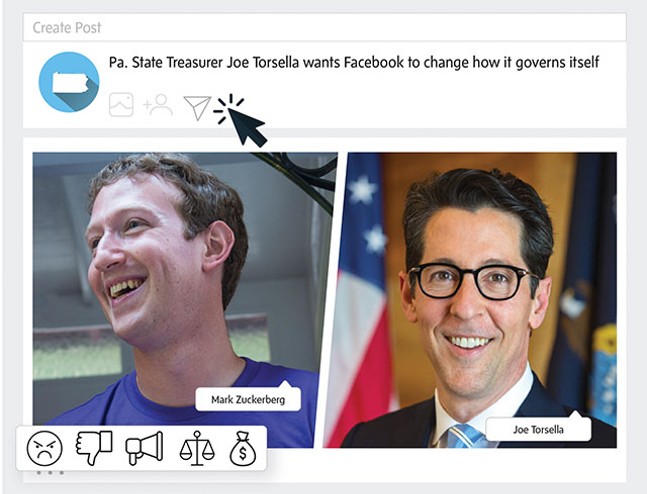 Pennsylvania taxpayers own 28,706 Facebook shares. That’s a very small percentage of the billions that constitute the social media giant’s shares, but that number still represents 28,706 votes at the company's share-holder meetings and gives commonwealth residents a say in how Facebook operates.

Or it at least it should.

Even though it’s been quite the tumultuous year for Facebook, with scandals involving loose privacy rules, the spread of false news, and resignations, there is little outside pressure to have Zuckerberg make changes.

Still, Pennsylvania State Treasurer Joe Torsella is beating the drum for changes to come to the company. Torsella has joined five other state treasurers in requesting that the Facebook board of directors make the role of Board Chair an independent position. Zuckerberg currently holds that position, in addition to being CEO.

Torsella, as the manager of the commonwealth’s $33.6 billion investment portfolio, says Facebook is too large and carries too much influence to continue without checks and balances in its governance structure. He says it is ultimately a financial recommendation to ensure that Pennsylvania's investment maintains growth.

“It’s about standing up when we think Pennsylvanians are being taken advantage of,” says Torsella. “We use the power of the purse when we can. … We have a higher obligation to engage to produce better results with companies that we think are going down the wrong road.”

Torsella, who was previously CEO of the National Constitution Center in Philadelphia, says his experience in the position means he understands the annoyance of having a board of shareholders make decisions for a private company. But in the long run, it is better for the company and investors, noting that most major corporations, especially ones that have been in existence for a long time, have checks and balances on shareholder power.

“It’s about standing up when we think Pennsylvanians are being taken advantage of.”

He also notes the growing calls to break up Facebook, reflecting the public's desire for the company to make changes. He would feel different if he was “calling for some radical thing,” but Torsella says his request for changing the governance structure is very common. Torsella says shareholders should have a proportional say about the future of the company that equal their shares.

“If shareholders put up their capital, they should have the same rights,” says Torsella.

According to CNBC, last year the Council of Institutional Investors came out supporting the abolition of multiple class listings for shares, like the Class B shares at Facebook.

Torsella says Pennsylvanians are especially impacted by Facebook, not just because the state invests more than $5 million in the company, but because of privacy concerns and how other countries have attempted to target Pennsylvanians in order to sway their votes during the 2016 election.

“We don’t do this indiscriminately,” says Torsella. “We do it where we think there is a Pennsylvania-specific issue, and where we can have an impact.”

According to the report by special counsel Robert Mueller, a Russian Company called Internet Research Agency created a fake “Miners for Trump” rally in Pittsburgh and Philadelphia, and tried to solicit shares from the Trump campaign and other prominent Pennsylvania Republicans. Facebook allowed an IRA-created account to sponsor this post, which was targeted directly to Pennsylvanians.

Torsella acknowledges the tough climb ahead to get Facebook to alter its governances, but he's optimistic. He cites examples in which economic pressure on pharmaceutical companies involved in the opioid crisis successfully produced change. He also pointed out how 68 percent of public Facebook shareholders (not including insiders like Zuckerberg) recently voted to remove Zuckerberg as chair, up from 51 percent of the last shareholder vote.

Torsella says he feels an obligation to pressure Facebook in order to protect Pennsylvanians’ investment in the tech giant that's directly tied to programs like tuition assistance and grants for new entrepreneurs.

“When you think about the money in our custody, it makes me mad Facebook is acting like this,” says Torsella. “Those people worked hard to send their son or daughter to college, or start a small business.”