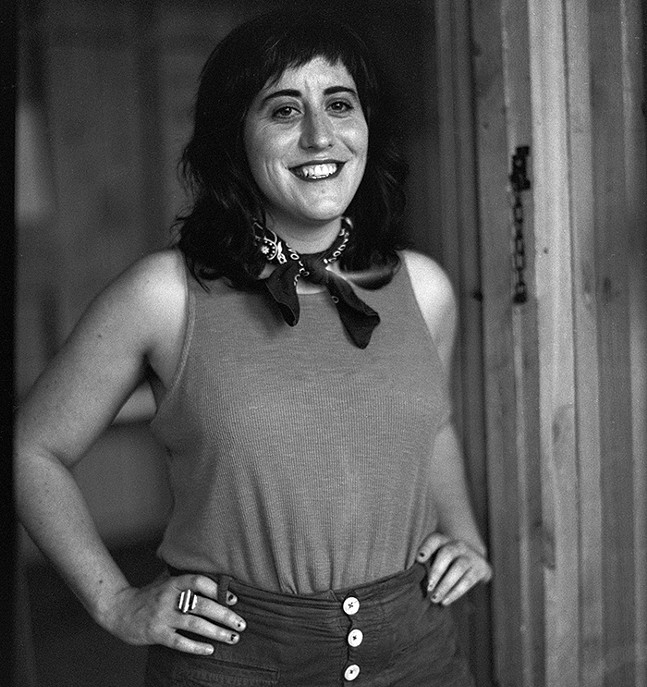 Taylor Grieshober assembles her short stories from brief notes written to herself. Sometimes she handwrites them on paper and sometimes she collects them in a Google Doc. They range from experiences in the service industry, to personal anecdotes, to encounters with friends or strangers. The stories can take months or longer to finish from her process of “cataloging.”

“What usually happens is that I get enough of these cataloged notes and one day the story kind of unlocks,” Grieshober says. “I start to realize this observation and this observation are the same voice or they are coming at it from the same angle, and I can build a character from there.”

Grieshober teaches fiction at CAPA (Creative and Performing Arts School), is a native of Edinboro, Pa. and has been fascinated by Pittsburgh since she was a teen. She peppers her new book, Off Days (Low Ghost, 2019), with geographical references to the area. She's a big fan of the Dumpling House in Squirrel Hill.

“I used to come to Pittsburgh in high school for shows,” she says. “I fell in love with it even though I'm from a small town, because it felt, and feels, like a small town. It's not intimidating to live here, and everything feels pretty accessible.”

Off Days' centerpiece is the title story, a series of seemingly random scenes that Grieshober weaves together about a woman and her misadventures.

“That one took the longest time to unlock by the sheer amount of the material,” she says, noting that Off Days was originally a series of zine entries and had 20 different versions. “I had a lot to work with and I had to figure out what were the most important vignettes, what were the vignettes that would make sense for the arc of the story and the character. That one started from a very personal place.”

The episodic nature of the stories seems suited to a generation with an increasingly fragmented attention span. Grieshober admits there's something to that, even as she describes herself as a “Luddite” who only recently adopted social media platforms.

"But I will say my goal, when I'm thinking about the reader, is I want to get your attention and I want to hold on to it,” Grieshober says. “And I want it to be something that punches you in the gut and is palatable and is quick. The one thing I'm very good at in revising is cutting. To me, there's nothing worse than reading a story and thinking, ‘This should have ended two pages ago.’ It is geared toward people who are on social media, a modern readership."

Off Days will be released Sat., June 8 at The Printing Press in Wilkinsburg. The reading, which will also feature Scott Silsbe, Sam Mitchell, Ben Gwin, and Kelly Andrews, will be followed by a dance party with DJ Erin of Yass Queen.