The Monster in the Hall | Pittsburgh City Paper

The Monster in the Hall 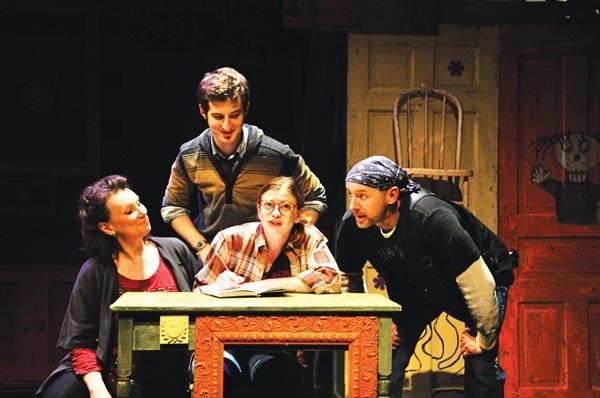 Photo courtesy of Suellen Fitzsimmons
Sheila McKenna, Matt Dengler, Melinda Helfrich and David Whalen in The Monster in the Hall, at City Theatre

If you drew a graph charting my enjoyment of David Greig's The Monster in the Hall — the new show at City Theatre — it would start out as a very flat line. During the first 10 minutes, we're introduced to the characters, content and style of the show and ... I was unmoved: Duck Macatarsney is a precocious, motherless 16-year-old living with her biker father in Scotland. Dad, known as Duke, is a pothead, and the two have to fool a children's-services representative who's coming to the house. And this was all related via a very exposition-heavy opening rock number as clichéd as it was dismal.

But then that line on the graph would jump a bit as Greig started to jiggle the framework, and waves of theatricality spilled over the footlights. Both Duck and Duke began to acquire intense subtlety and contradiction, and Greig unmoors the play from reality, reveling in constantly changing theatrical styles.

By the time we got to the 30-minute-mark, that line was shooting straight up and off the graph. Greig turned out to be a consummate storyteller, and I can't think of another playwright who could take such conflicted characters, and so many conflicting styles, and weave them into such a hugely entertaining celebration of life and art.

Tracy Brigden does breathtaking work as the director. Moving in lockstep with Greig's purpose, she's fashioned a show in which the individual parts are just as remarkable as the solid whole. Melinda Helfrich couldn't be more appealing as Duck, playing the role with a quite moving honesty. David Whalen's task as Duke is difficult; but though the character is entirely passive, Whalen keeps his story front and center. Matt Dengler is one of two other actors playing a dozen characters and, especially as Duck's maybe-boyfriend, is wonderfully complex.

Yet the centerpiece of this production is Sheila McKenna as a whole raft of oddballs. With ruthless specificity and enormous integrity, McKenna drives the show to its stratospheric heights. There are many reasons this will be one of my most memorable plays ... and a blisteringly powerful McKenna is as the top of that list.