Loft parties pop up in Lawrenceville this month 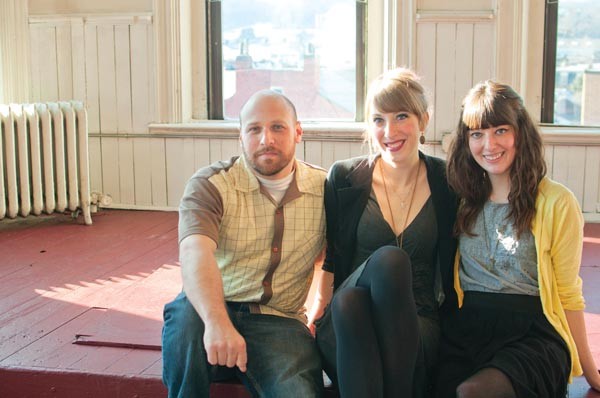 Pop-up retail has gained purchase in recent months as a trendy way to fill vacant spaces in Pittsburgh; booksellers and other hawkers of wares might set up shop for a month or two, then pack it in and move on. Still rare, though, is the pop-up music venue. But this month, developer Brian Mendelssohn is opening an historic building in Lawrenceville for three nights only to host local bands and DJs and give an old ballroom one last hurrah.

Mendelssohn, principal of Botero Development, which focuses on Lawrenceville real estate, bought the Arsenal Bank building last year; built in 1885, the three-floor structure has hosted everything from banks to a pet-photography studio. He's in the process of renovating the entire building to hold lofts and a restaurant space. In the meantime, though, Mendelssohn — whose music-scene c.v. includes a second life as a soul DJ and whose wife, Rebecca Morris, runs crafty gift shop WildCard — thought it would be the perfect spot for a party.

"The space lent itself to that," Mendelssohn asserts. "When you're up in the ballroom on the third floor, it is ..."

Clarke and friend Stephanie Brunner have become de facto partners in the three-part local-music party, which they've deemed Loft Bash. Clarke and Brunner, both designers, became friends with Mendelssohn through his weekly DJ gig at Kelly's Bar and Lounge in East Liberty. They got to talking about the building, and his plan for an event there.

"I think it's our mutual love of great design, architecture and music that really made the project happen," Brunner says.

Mendelssohn is a Carnegie Mellon grad who moved here for school in the mid-'90s and lived in and out of town for years before settling in with his development business. He says that in the late 19th century, when the Arsenal Bank building went up, it wasn't unusual for a bank to have something along the lines of the ballroom that's being showcased.

"This particular space," he adds, "is completely intact, the way it was in the 1800s. It hasn't been altered, except for the bathrooms."

"When I first stepped into the building," Brunner says, "I was blown away by the architecture — the ceilings and floors, and the windows overlooking the city. It's just stunning."

The three set to planning a series of events for the space, using its historical significance as a jumping-off point. The first, on Sat., March 3, will be an old-school soul dance party featuring J. Malls (of Title Town) and D.J. Riel (Steel City Soul Club) spinning. The following week, the ballroom returns to its roots, with a Prohibition-era theme. Country rockers The Harlan Twins headline, with old-time folkie Elliott Sussman opening, and DJ Fernando Hammer (hint: that's Mendelssohn) on the turntables. The final event, on March 24, brings the building back to the present, with Cutups and Edgar Um playing contemporary electronic music.

The Prohibition party holds a special place in the hearts of the organizers. "We were having a conversation about how we romanticize the past," explains Brunner. "And what better way to do that than the '20s? I think that might be our favorite era, the three of us."

In addition to the music, the organizers promise some fun extras — like a photo booth — plus the rare treat of spending time in the old ballroom. After the parties, the work on the building begins in earnest. Mendelssohn plans for it to house four apartments, a yoga studio and a restaurant.

"After these parties are done, no one in the public is going to see the space again," explains Mendelssohn. "So it's to show off the space, how awesome it is — plus, all the things I do, I try to support Bike Pittsburgh." The bicycle-advocacy group will be the beneficiary of the $5-a-head admission cost.

"I think we're using the space to help promote these musicians and DJs," adds Clarke.

"And this is the first time in something like 70 years that the space is being used for its original purpose," says Brunner. "It's almost like re-imagining the space, and what it would've been used for then, in modern times."