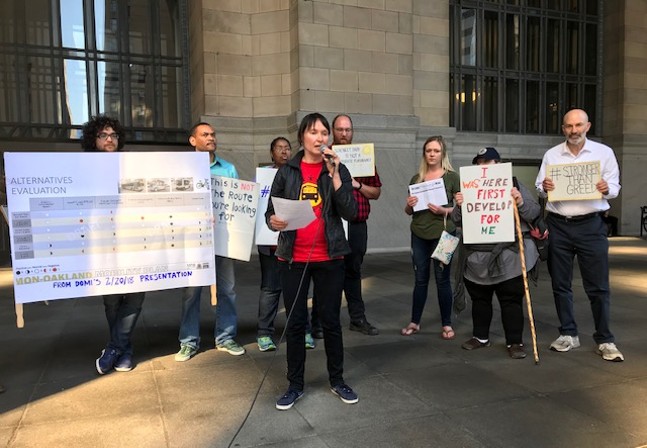 “We suffer from bad pedestrian access now,” said Hazelwood resident Conor Sites-Bowen at the rally. “Why build new roads when we have ones that aren’t being maintained?”

The technology is relatively new, but Las Vegas has implemented a very short route for an autonomous shuttle and Providence, R.I., is considering a longer route to connect its Downtown with a popular neighborhood. The Las Vegas shuttle has averaged hundreds of riders a day, but according to the Regional Transportation Commission of Southern Nevada, which serves Las Vegas, eight Vegas-area bus routes carry more than 9,000 people per weekday.

Nevertheless, the city of Pittsburgh dedicated $1.3 million towards the Mon-Oakland Connector this year and is projecting to commit a total of $23 million to the project by 2024. According to slides from the upcoming public presentation of the proposal, the idea is to run autonomous shuttles through a path running from Central Oakland through the Panther Hollow Trail, create a new path using an old right-of-way in Greenfield to connect to Sylvan Avenue, then turn around at Elizabeth Street, travel through Hazelwood Green and the Pittsburgh Technology Park, then loop back into the Panther Hollow Trail.

There will be 11 hailing stations, where passengers can request shuttles, which can hold about 12 people at a time. Additional infrastructure, like switchbacks and ramps, are proposed to connect pedestrians in Hazelwood and South Oakland to the new hailing stations. 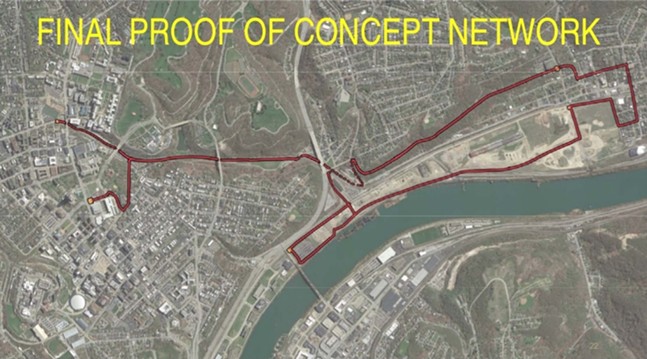 Screenshot from mon-oaklandmobility.com
Proposed route of Mon-Oakland Connector
At the rally, residents and advocates who spoke were opposed to the project as a whole. They said that city money should be spent instead on improving sidewalks on Irvine Street and helping to add weekend bus service from Hazelwood and maybe bus service to South Oakland.

But aside from opposing the priorities of the Mon-Oakland Connector, Laura Wiens of Pittsburghers for Public Transit questioned the ability of autonomous shuttles to adequately service that corridor at all, even under the best circumstances.

“In terms of capital investments, let's start with what we know works and things that can carry people in bigger quantities,” says Wiens. “We don’t think the shuttles will be adequate.”

For example, in the California Bay Area, an on-demand shuttle called DemandTrans allowed users to pick up rides from certain bus stops and replaced bus service. According to Streetsblog, DemandTrans served just three passengers per hour.

Transit expert and consultant Jarrett Walker wrote in his blog Human Transit, “On average, micro transit seems to trigger an upward redistribution of the benefits of public subsidy. This is a Very Bad Thing for the public sector.”

Screenshot from mon-oaklandmobility.com
An example of an autonomous shuttle
Pittsburgh officials are projecting that 1,244 people will use the Mon-Oakland connector on its opening day. Presumably, those numbers would grow as the shuttles became more well known, but Wiens says even these projections might be overly optimistic, noting how many riders the city expects to come from Four Mile Run, a small neighborhood in Greenfield.

The city is projecting 489 people from Four Mile Run and other parts of Greenfield will ride the shuttle service on an average weekday. In the census tract that includes Four Mile Run and other nearby sections of Greenfield, the population is 2,690, with a working-age population of about 1,500. Of the working-age population, about 17 percent use public transit to get to work (about 256 people). The Mon-Oakland Connector assumes that number would almost double thanks to the service, even though the 58 bus already provides a public transit route from this neighborhood to Central Oakland, South Oakland, and Downtown.

Even if the Mon-Oakland Connector did reach and exceed its ridership projections, Wiens worries that it won’t be able to meet the capacity to adequately serve that growing corridor.

As NEXTpgh reported in 2015, Hazelwood Green (then referred to as Almono) is supposed to generate up to 6,000 jobs and 2,500 homes. The Technology Center in South Oakland, which employs more than 1,000 people, has been growing recently, with a new hotel built and a deal for a 78,000 square foot tech-flex space recently inked.

And the Mon-Oakland connector is meant to connect these growing job centers with Oakland, which is the third largest job center in all of Pennsylvania, housing about 80,000 jobs, not to mention thousands of students and residents.

Wiens says buses, and even potentially a Bus Rapid Transit route running along Second Avenue, would make more sense than low-capacity shuttles to service those areas.

“It is hard to imagine that they can provide the operating costs to serve the residents, not the mention the thousands of workers,” says Wiens. “This is not a long term solution for Hazelwood Green.”

Las Vegas' shuttle currently ferries passengers in the heavily trafficked Fremont Street entertainment district. According to presentations for the Mon-Oakland Connector, the proposed shuttles for Pittsburgh appear to be similar to those used in Las Vegas.

The Las Vegas shuttles travel about 15 mph with a max speed of 27 mph. They stay on a fixed route that is only 0.6 miles long, to connect an entertainment district with a popular park. Over its first five months of operation, the Las Vegas shuttle has averaged about 650 riders per day. 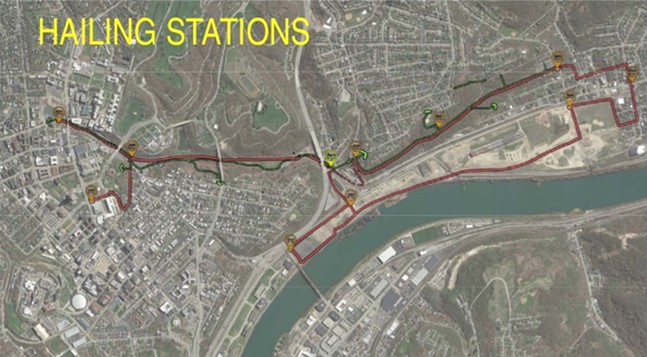 Screenshot from mon-oaklandmobility.com
Proposed route with hailing stations
The Mon-Oakland Connector would be connecting riders in a corridor of potentially more than 85,000 jobs, as well as tens of thousands of residents and students. According to transit expert Christof Spieler’s book Trains, Buses, People, neighborhoods with densities greater than 10,000 people per square mile justify frequent transit service (BRT, light-rail, etc.)

Hazelwood Green is about 178 acres (0.27 square miles). Considering the projections of 6,000 jobs, and 2,500 residences, the soon-to-be neighborhood is looking at holding potentially more than 34,000 people per square mile on an average weekday.

The Pittsburgh Technology Center in South Oakland is only 48 acres (0.075 square miles). The PTC is due for even more job growth but is already home to more than 13,000 people per square mile during the week. If Hazelwood Green, Central Oakland, and PTC continue to expand as projected, that kind of density in the corridor appears to warrant high-capacity, frequent transit.

At a February public meeting for the Mon-Oakland Connector, Pittsburgh officials shared an evaluation they completed that rated improved Port Authority bus service as lower than the autonomous shuttle route. But Wiens says city officials didn't detail how exactly they rated each proposal, and the entirety of what officials shared was just a simple graphic (shown below).

Screenshot from mon-oaklandmobility.com
But, there is some hope for the potential of autonomous shuttles as a public transit solution, with an example from just an hour south of Pittsburgh.

The Personal Rapid Transit in Morgantown, W.Va. is low-tech autonomous and runs pods on a fixed, elevated 3.6-mile route from Downtown Morgantown to West Virginia University. It serves five stations in pods that can carry about 20 people comfortably, and actually has maintained a high number of riders over its decades of service, with about 15,000 people using it daily. However, the project was completed in 1975 for about $120 million (more than $500 million in today's dollars) and received large monetary support from the federal government, according to Governing magazine.

The city is committed to spend about $23 million on the Mon-Oakland Connector, but it is unclear how many private partners will contribute. The state or federal government have not yet expressed interest in the project. The Mon-Oakland Connector also proposes running on public streets, unlike the Morgantown PRT.
© 2023 Pittsburgh City Paper