What would a $15 minimum wage mean for Pittsburgh workers? | Pittsburgh City Paper

What would a $15 minimum wage mean for Pittsburgh workers? 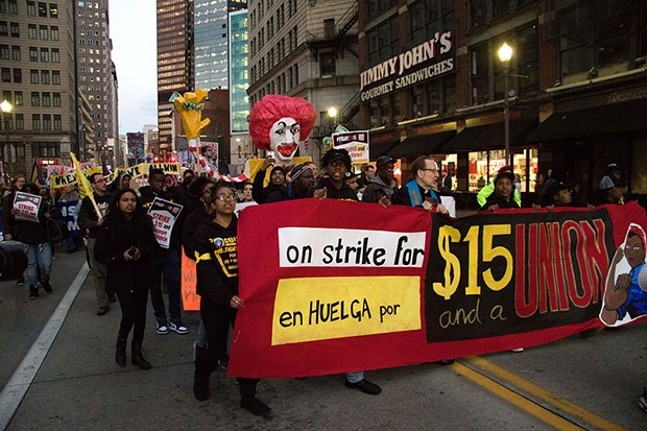 CP photo: Luke Thor Travis
The push from advocates, politicians, and labor unions all align at one point: $15.

In terms of minimum wage advocacy, whether on the federal, state, or local level, the ultimate goal appears to be $15 an hour. Presidential candidates campaign on it, Democratic representatives introduce bills to set it as the minimum wage, and advocates shout “Fight for 15” at rallies.

Pitt professor Jeffrey Shook worked on the wage study and said these are the typical ranges of pay for hospital workers, excluding doctors and nurses (food service, orderlies, custodian, office workers, etc). Shook said the study compiled information from about 100 in-depth interviews and more than 500 surveys from Pittsburgh-area hospital workers.

He was particularly interested in the subjects who make between $15-18 an hour, since this is the range that people would be thrust into if a $15 an hour minimum wage were to take effect.

Shook said hospital workers in that pay range were 90 percent women, and comprised of a high percentage of workers of color. Most were high-school graduates and some had some college or technical training. Those employees tended to be older and were typically head of their respective households.

The wage study is still being finalized, but Shook says his preliminary conclusion is that people make just over $15 an hour in Pittsburgh still face considerable financial hardships.

“I think we are seeing that $15 is not a magic number,” says Shook. “Once they get above $15, it is still really hard to break away from those struggles they had most of their life.”

Shook says study participants, even those making more than $15 an hour, said they have had to skipped meals, failed to make mortgage payments, and struggled paying utility bills.

Shook also notes that many hospital workers are saddled with medical debt, which deeply cuts into their wage, and has a ripple effect to other financial decisions.

“Medical debt, a lot of people are managing those things on credit cards,” says Shook. “They are not able to borrow in ways that can help them.”

Presidential candidate and U.S. Sen. Bernie Sanders (I-Vermont) has been one of the country's biggest champions of a $15 an hour minimum wage. He has introduced a bill to raise the federal minimum wage to that level and put pressure on Amazon and McDonald’s to raise their wages.

During a Pittsburgh rally on April 14, Sanders addressed the low wages of many in the country and echoed the problems of the cycle of debt that affects many highlighted in the Pitt wage study.

“If today your car breaks down and you don't have the money to repair that car, and if you can’t get to work, you get fired, and if you get fired you can’t take care of your kids,” said Sanders at the rally. “That is what it is like living paycheck to paycheck.”

Sanders also addressed the medical debt that comes with not making a high enough wage. At the rally, Sanders said that there is “a fear that maybe your kids or your parents get sick and might end up in the hospital, and in order to pay that bill, you’re gonna go bankrupt.” In addition to proposing a jump in the federal minimum wage, Sanders is also proposing shifting to a single-payer health care system, where the government would provide health insurance plans to all Americans.

In the Pitt wage study, Shook noticed that even though many hospital workers had many hardships, increased pay did reduce financial stress. But $15 an hour wage didn’t entirely eliminate hardships.

“With the first wage increase that hospital workers got, things got better,” noting the bump that UPMC gave to workers recently.

The study also counters the narrative that low-wage earners are young people who have fewer expenses because they live with their parents. Shook says most of the hospital workers have worked for several years, and some of these folks have been in these jobs for 17 years.

The state minimum wage in Pennsylvania is the same as the federal: $7.25 an hour. Those jobs are mostly concentrated in the service industry. According to census data, the working age population in Pittsburgh earns a median wage of $34,600 a year. If factoring that into a full-time job, that is an average wage of $16.63 an hour.

In the end, Shook says raising the wage to $15 an hour shouldn’t be the be all end all, even in Pittsburgh. He says maybe a boost in social services, like subsidized child care, could help workers avoid those financial hardships that come with low-wage jobs. He says forcing employers to pay more in combination with more government-provided social services could be a solution to bringing Pittsburgh workers up into a more comfortable life.

“I think getting to 15 gets toward the goal of improving well being, but not to where we need to be,” says Shook. “The employers they don’t want to go all in on wages, so maybe there is is a carrot-and-stick approach.”
© 2022 Pittsburgh City Paper