A local artist's project with a ventriloquist dummy culminates in a public ChatRoulette performance.

"If people can get past the realization that there's a dummy in the screen, then they actually play along and mimic his movements." 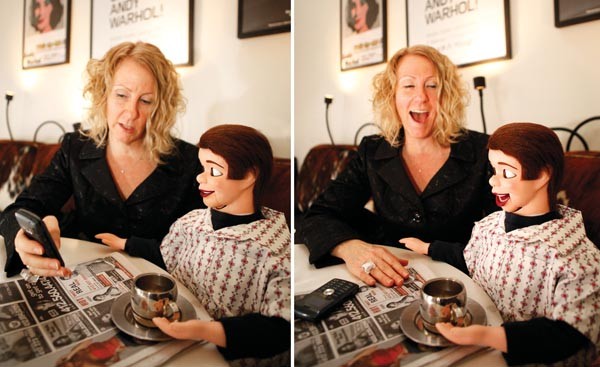 Photo by Heather Mull
But what do they talk about? T. Foley and Hector share the good times in the Warhol Café, at The Andy Warhol Museum.

In a 1972 episode of The Flip Wilson Show, comedian Albert Brooks performed a "ventriloquist" bit in which he continued mimicking his dummy's voice after dropping it on the floor to light a smoke.

"It's actually a terrible performance in terms of craft. But it's great because it plays against the audience's expectations," said local artist T. Foley, who came upon the video earlier this year, while laid up with a cold.

Foley isn't a ventriloquist; Hector, in fact, seldom "talks" at all. Exceptions include the seven-minute video titled "On Display," in which Foley uses voiceovers to make Hector speak actual "Men Seeking Women" posts from Craigslist. Vignettes like "Truck" — about a 53-year-old-man looking for company during long hauls — and "I Am This Guy," from "a guy who keeps his pubic hair properly maintained," were shot in and around Foley's home.

Last summer, Foley addressed Hector's silent condition on The Hector Can't Talk Talk Show, performed at the East Liberty talk-show/diner Waffle Shop. Audience members and special guests engaged a reluctant Hector to play catch, relax with yogic breathing techniques and even partner up for a little ballroom dancing. All attempts were unsuccessful, though a Rorschach test confirmed that Hector's inability to speak is fear-based.

Hector — a classic 1950s-style "Danny O'Day" dummy Foley acquired online — currently sits in a vitrine at the Warhol, tethered to an oxygen mask. "I figured it might be difficult for him to breathe in there," she says.

Foley's interest in Craigslist dates to 2008, when she posted her own personal ad. After sifting through thousands of Craigslist ads, Foley created a slideshow examining what she described as an "increased sense of men's self-awareness."

Foley — formerly director of a media-literacy arts program for young students at Pittsburgh Filmmakers, where she's now an artist in residence — spent years studying the personal impact of imagery found in television, advertising and online. Her research yielded many examples of how girls and young women are taught to see themselves, but not so much with men. Now, Foley argues, the globalized social media has changed how men present themselves. As Hector tweeted: Male birds have tail feathers; heterosexual male homo sapiens have Craigslist.

Easy Pieces isn't the first time Foley has employed a human-like doll. Her 2000 video "Licence," for example, tells the story of a blow-up sex doll on its day off. Foley bathes and dresses the doll, and then teaches it to drive.

"When some of my friends saw that video, they told me it was performance art," she says. "I didn't necessarily see it that way, at the time. When I share my work with others, I want them to get pleasure from it; I want them to think about it."

Foley's Jan. 6 closing performance for Gertrude's/LOT is The Dummy Is Present, an hour-long online video-chatting session before a live audience. The piece reinterprets performance artist Marina Abromavic's notable 2010 work The Artist Is Present, in which Abramovic sat at a table, daily, for three months, inviting spectators to sit across from her.

Foley will sit with Hector in her lap as they search ChatRoulette for virtual connections via laptop. ChatRoulette allows visitors to communicate via webcams. Or, like Hector, you can just type friendly messages, if you don't feel much like talking.

Foley's show carries a disclaimer for younger audiences. Hector himself keeps it clean with simple gestures.

"His big thing right now is the mirror game," Foley says. "If people can get past the realization that there's a dummy in the screen, then they actually play along and mimic his movements; there's something innocent about it."

Foley played a video of a boy, maybe 10 or 11, acting older by wearing an oversized sports jersey, backward baseball cap and sunglasses — in the middle of the night. When he saw Hector on the screen, he took off his glasses, eyes bulging. He asked his friends whether they saw the same thing — a wooden dummy with creepy teeth and a bad haircut. Instead of clicking to the next chatter, the boy started to move his hand across his face like Hector.

"He has a disarming effect on people during chat sessions," Foley says. "But I like that he opens them up to what seems like an anonymous experience."