"There's this momentum that comes out of spaces where people are coming in and out and everybody cares about the same thing." 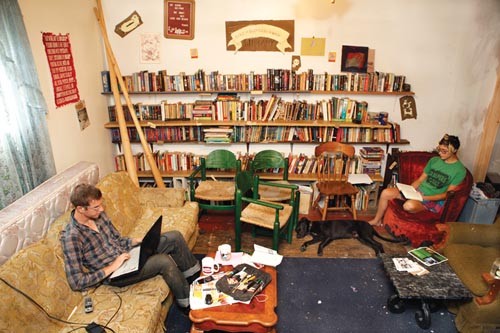 At age 21, Daniel McCloskey received a mysterious inheritance of $10,000 from a woman he had never met. Apparently, the woman had been very close to McCloskey's older sister and, as he puts it, "wanted to give me the benefit of the doubt that I was OK, too." He had just graduated from the University of Pittsburgh and could have thrown himself the biggest party of his young life. Instead, in December 2008, he bought a house in Upper Lawrenceville and founded the Cyberpunk Apocalypse.

There's no simple way to explain Cyberpunk Apocalypse. Artnoose, a letterpress-zine publisher who moved in six months after McCloskey set it up, calls it a "house-plus." 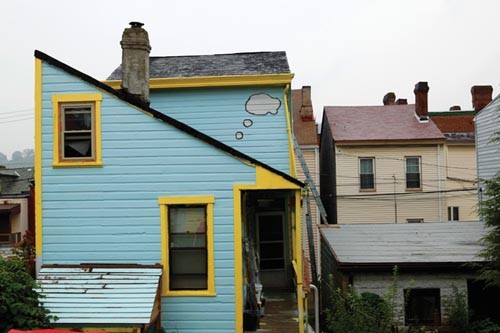 Photo by Heather Mull
Daniel McCloskey calls the guesthouse for visiting writers "a biggish closet with a window."

"It's a house, we live here, but at the same time it's more than a house," says Artnoose, one of five permanent residents of the collective. "It's a library, a performance space."

It's also home to a visiting-writers program that's garnering some high-profile attention -- even though visitors occupy what McCloskey affectionately calls "a biggish closet with a window."

Cyberpunk's section of Carnegie Street, a block off Butler, is a stretch of vinyl-sided houses with three-step stoops and skinny little trees clinging to life in their two square feet of dirt. Then, on the right, is the Cyberpunk Apocalypse, which recently received a new coat of paint. Residents chose an intense sky blue, and adorned the second floor with fluffy white clouds. On a recent July day, the building was bluer than the actual sky by several shades.

The front room houses the library, a wide wall full of bright zines and books. In the kitchen, July's visiting writer, Max Wheeler, of Athens, Ohio, was painting something large and messy on a canvas laying flat in front of him. Out back, there's a courtyard and out-building, also painted brilliant blue, where Artnoose has her room and the visiting writer that closet.

Applying to the visiting-writer program is simple: Basically, send an email with some samples of your work and ask, politely. The residents decide whom they could live with for a month. The closet is booked through April 2012.

The visiting-writer program is something McCloskey and Artnoose are especially effusive about. "It's been a really cool aspect of the house," Artnoose says. "On the one hand the writers get the space they need, to not be around all their stuff. But it also brings a new and usually really excited writer into the house, where then they're talking about writing, and we're talking about writing. A lot of really great conversations have come out of that."

"There's this momentum that comes out of spaces where people are coming in and out and everybody cares about the same thing," says McCloskey. Artnoose, who works her letterpress in the Cyberpunk basement, almost never wrote fiction before she lived here, but has worked diligently on it since. McCloskey, who studied fiction writing at Pitt, is trying his hand at comic strips.

It's easy to focus on art in part because living expenses are so low: Rent is $73 a month, and McCloskey pays down debt with freelance writing and illustrating gigs.

Moreover, residents seem at least as excited about other writers' work as they do about their own. They get out in the community too: No month goes by without at least two Cyberpunk Apocalypse events. In recent weeks, they've had readings and shows in places as disparate as the Carnegie Library Main Branch, in Oakland, and Lawrenceville bar Belvedere's.

Discussing the group's larger implications and missions, McCloskey and Artnoose kept using the word "friends." Writers, McCloskey says, network constantly. But in Pittsburgh, he says, writers see each other often enough to become friends. When you're friends, you realize "you've got two friends that need to be each other's friends." That's what McCloskey thinks of when he thinks of networking -- something more reciprocal than just collecting a business card.

Pittsburgh has always had a small-town feel, where no one is separated by more than a few degrees. For McCloskey, however, that's not close enough. He wants everybody to be friends, and for Pittsburgh to be one big house.