Warhol Museum director Tom Sokolowski talks about his resignation, his 15 years in town ... and public sculpture in Pittsburgh. 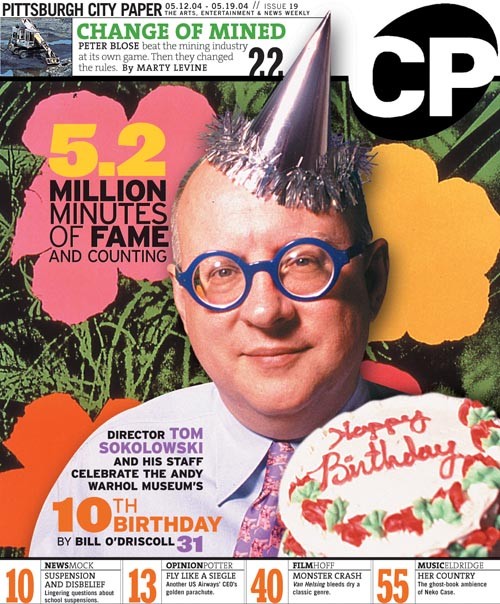 Anything for publicity: In 2004,Tom Sokolowski posed for CP's cover for a story about the Warhol Museum's 10th anniversary.

When Tom Sokolowski resigned last week as director of The Andy Warhol Museum, he left a legacy not only as a successful arts administrator but also as an outspoken cultural gadfly. Since hitting town in 1996, he's been a reliably frank and funny voice against whatever's kitschy or dull. Sokolowski's targets have included a proposed large-scale pirate ship outside PNC Park, which he called "a cheesy, fiberglass, Good Ship Lollipop." He made national newswires critiquing a new statue of Fred Rogers, and once predicted that a proposed Downtown statue commemorating Gene Kelly would recall "a fourth-rate amateur bowling-league trophy."

Meanwhile, Sokolowski was guiding The Warhol (one of the four Carnegie Museums) toward becoming the venue whose exhibits, parties, performances and screenings regularly drew a cross-section of Pittsburgh's artiest, wackiest, most fabulous and culturally curious people. Provocative exhibits like the lynching-themed Without Sanctuary; the edgy Off the Wall performance-art series; and the Good Fridays happy hour all raised the museum's profile. Attendance, which in Sokolowski's early years hovered between 60,000 and 80,000, rose to 103,200 by 2009 (many of them out-of-towners). And The Warhol's touring exhibitions have drawn nearly 9 million visitors worldwide.

Sokolowski, 60, was also instrumental in the revival of the North Side's New Hazlett Theater, now a busy arts venue.

Sokolowski remains on the job through Dec. 31. In February, in fact, the museum will open a show he curated, The Word of God, with contemporary artists taking on the Bible, Torah and Koran. He spoke with CP on the eve of an Asian trip on museum business.

Will you return to New York, or stay in Pittsburgh?
I'm not about to move to New York without a job! I don't see anything that would keep me here at the present moment. But who knows?

How were things at The Warhol when you arrived?
Something that people don't remember is that [the museum had had] two directors really in less than two years. Then they said, "Let's make one more try," and they got me. So 15 years later -- and I'm not saying I'm so brilliant or anything -- but I think I did [communicate] where this place was, literally and philosophically. In the first few years, I went to more stupid bingo games and Rotary lunches.

On Facebook [after Sokolowski resigned], this one person [wrote], "Oh, he was so snobbish." I felt like saying, "Honey, you've never called numbers at a bingo game at the age of 47."

How did your concept of the museum change?
The thing that was already happening by default was that we weren't just talking about Andy Warhol. We were talking about so many of those [cultural] waves, the tsunamis that go out and touch so many things. A couple of people have said to me, "[The Warhol] could have become a mausoleum," and just have "x" number of pictures on the wall, never moving them. And then the tourists come in and say, "Ooh that's nice," and that's that.

What are you proudest of?
I really believe the thing when people say, "It couldn't have happened anyplace else but The Warhol." I love that as a mantle because it's signifying the uniqueness of much of what we do.

How about particular shows?
A small show we did [with New York's International Center for Photography] -- it was basically about Abu Ghraib: Inconvenient Evidence. I was really proud of that show. These were images that literally had been taken off a printer, pushpinned to the wall, not matted or framed. And in order to be somewhat democratic about this, [we had] images from papers in the Islamic world that depicted the execution of [Wall Street Journal reporter] Daniel Pearl, and the butcheries that happened to the U.S. and other forces, at the hands of some of the Muslim soldiers. ...

I remember that I got into this two-week long e-mail discussion with two former GIs, a married couple. They lived somewhere in eastern Ohio. We went back and forth and we really I think [developed] a great sense of respect and fondness for one another at the end of all this.

Regarding Pittsburgh's larger cultural scene, you've been quite outspoken about public artworks.
Well, they're shitty here. There's not been a good one since I've been here.

One thing that I think was successful because I'm totally self-serving, but -- what the hell -- is the piece we put up that's at Seventh and Fort Duquesne, the Transformer, by Glenn Kaino ["Arch," a robot-like figure composed of local bridges that Sokolowski and the Heinz Endowments commissioned while heading the Pittsburgh 250 committee]. It has a playfulness to it. I don't know how many times I've seen kids pointing at it, having their pictures taken. And people who are interested in that whole Terminator/Transformer mythology, and yet playing off of the bridges in the clever way it does, and playing off the monumentality of metal sculpture since antiquity -- I think it's a great piece.

Has Pittsburgh changed much since you arrived?
I don't see it as so much change, although some people do. As much as there's maybe more organized [activity], I would say that 10 years ago, there was far more edgier stuff happening in the repertory theaters, edgier things happening in some of the dance groups.

I understand it. If you need to fill the seats, and it's easier to fill the seats with a golden oldie play, even if it's a golden-oldie play from 10 years ago -- that's what it is, because you certainly know who your subscribers are.

We're slightly different in that because Warhol is tainted, if you will, with the mantle of change and avant-garde, that's certainly what he did. We're not going against the grain particularly: We're just doing what Andy did.