What's does the future hold for the historic buildings on the Garden Block in North Side? | Pittsburgh City Paper

What's does the future hold for the historic buildings on the Garden Block in North Side? 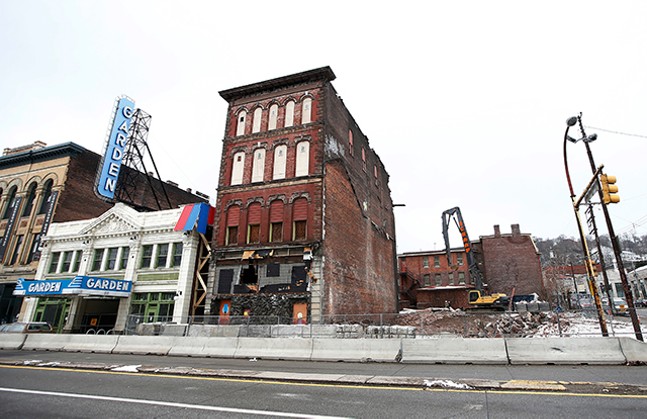 As a headline, “Dog bites man” is satirical, but it indicates that an event is unfolding about as you would expect.

When Pittsburgh loses a cluster of historic buildings, as we did with the recent demolition of 4, 6, and 8 West North Avenue on the North Side at the beginning of February, that is definitely news. We lose historic buildings all the time. Sadly, it’s not much of a shock.

The so-called Garden Block on the North Side, bounded by West North, Federal, Reddour, and Eloise across from Allegheny Commons, has had its ups and downs of redevelopment in recent years. The centerpiece theater sat unused in the early 2010s, after its last days as a porn theater. Then, a block-wide redevelopment campaign under the ownership of the Urban Redevelopment Authority (URA) saw notable successes. Rebirth of the adjacent Masonic Temple as the City of Asylum headquarters has been a terrific success, and the preservation of the contiguous Mayberry building as a 16-unit apartment building saved a prized work by historic architect Frederick Osterling.

But the Garden Theater itself, though renovated, has languished without a tenant after the departure of its Philadelphia-based developer Wayne Zukin. Press accounts have attributed that vacancy to the precarious nature of the buildings so recently in the adjacent lots at the prominent corner. 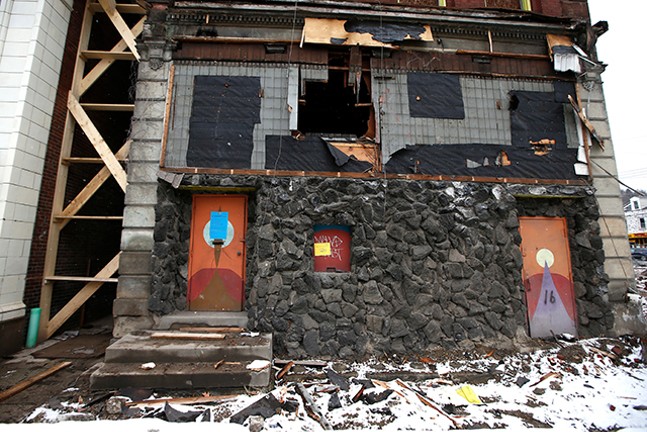 The three rowhouse-type structures dated from the post-Civil War era, with characteristically tall floor-to-floor heights and workman-like ornamental detail in Romanesque and so-called “Italianate” architectural styles. Though decaying substantially in the days before their destruction, they constituted “one of the North Side’s most noteworthy and historic blocks,” according to Bill Gandy in the Allegheny City Historic Gallery’s on-line history.

A solution had been in the works. Trek Development, working with architecture firm Rothschild Doyno Collaborative, proposed an eight-story, mixed-use commercial and residential development. Their community-feedback driven process and clever incorporation and resuscitation of historic buildings were hallmarks of the admirable development. Matthew Falcone, President of Preservation Pittsburgh, commented that Trek’s team “was really trying to be respectful and integrate the parts of the building that were there.”

The proposal needed a variance for eight stories rather than the allowable three. Developers argued that the height was necessary to help defray the reported $2.7 million cost of preserving the historic facades. The scheme passed Pittsburgh’s zoning board, but got stuck in the courts when North Side residents David Demko and Stephen Pascal sued. Both the Allegheny Court of Common Pleas and the Pennsylvania Commonwealth Court ruled against the variance.

In the ensuing delay, the buildings decayed closer to the point of collapse, and the tax increment financing expired, endangering the project’s financial viability. Trek President Bill Gatti commented in a statement, “There [was] no viable path forward for 4, 6, and 8 West North under the current zoning regulations.”

Litigants Demko and Pascal, perhaps unexpectedly, spoke out for preservation of the buildings under some kind of different development scheme for which no real proposals emerged. They suggested that the URA resell the parcels individually.

Some neighborhood groups lost their patience with delays.

“Many residents have become impatient with unrealized plans and lack of progress,” wrote Gandy, citing a March 2018 neighborhood group vote to demolish. Patrick Dexter, president of the Allegheny City Central Association, commented via email, “Over the last [several] months of discussions, the city, the state, and the preservation groups in Pittsburgh all agreed that demolition was the only viable option.”

Matthew Craig of Young Preservationists Association moderated that view. “We accepted that they had to be demolished because it had become a safety issue. It is with regret that we accept that this is what has to happen.”

Whoever bit whom in this whole enterprise, the injury to the neighborhood is real in either case. Buildings that many tried earnestly to save are now irreplaceably gone.