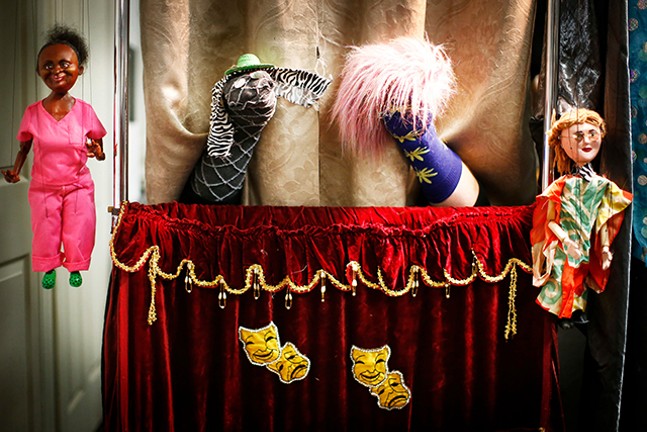 Confession time: everyone secretly loves karaoke. Whether it's belting it out in the car or jamming in the shower, singing is a liberating activity. Getting in front of an audience and vocalizing, however, is a different story.

BOOM Concepts is trying to make the act more approachable by adding puppets to the equation. The Garfield community art space is hoping people of all walks of life, specifically the Black community, can come together, have fun, and feel comfortable in their own skin.

“There are people that have great inhibitions, who use puppets as sort of an effigy, or a step, to put something between them and the audience,” says Dave English, one half of the Puppet Karaoke team and President of the Puppetry Guild of Pittsburgh. “There are kids that won’t talk to you, but through a puppet will say all kinds of shit. There’s that, layered with karaoke. So, you go up, and you’re singing, and maybe you can’t sing very well, but if you do it in a goofy voice, and you’re hidden behind this blind, and the puppet is what everyone is focused on, there’s a lot more flexibility to it.”

English’s Puppet Karaoke partner is Darrell Kinsel, co-founder of BOOM Concepts. The two have been talking about collaborating for some time, but they first needed to find an intersection of their practices – puppets and performance art.

After Thomas Agnew, BOOM’s co-founder, hosted a successful Autotune Karaoke event in June through Jenesis magazine (which Agnew also founded), Kinsel began thinking of other ways to put a twist on the activity.

“This year being our fifth year at BOOM Concepts, we wanted some new interesting, funny programming during the weekday,” says Kinsel. “I had seen some examples of puppet karaoke online, and [English] and I were throwing some links back and forth. I was like 'let's do it.' The benefit of having your own space, we can set whatever the parameters are.”

Puppet Karaoke on Feb. 13 will be the first in an ongoing series. Every eight weeks BOOM plans to host the event. The first iteration will be love-song themed given its proximity to Valentine’s Day. Along with pre-made puppets on site, attendees can make and take home their own sock puppets.

“We just want people to enjoy themselves and try something different,” says Kinsel. “It’s not a long, all-night thing, it's 6-9, something you can shoot to after work, grab a bottle, and you don’t have to stay the whole time.”

Kinsel and English plan to emcee the event together, with puppets of course. Since both are prominent members of the arts community and collaborating on this project, their aim is for everyone to feel welcome.

“Like many arts organizations and clubs in Pittsburgh, [the Puppetry Guild] is not as diverse as we could be,” says English. “So, what a great opportunity to mix up me and my puppet nerds, at a place like BOOM, that attracts a younger and more diverse crowd.”

“Doing it at BOOM, it’s Black. We really want to be inviting and engaging Black people with all confidence. [Puppet Karaoke] is something different, and you don’t normally associate puppets with Black culture,” says Kinsel. “We want to be engaging Black audiences with this activity. With [the event] being hosted at BOOM, and with [English] being the President of the Puppet Guild, we hope to have people of all identities feeling safe to come and sing.”

Just like the crowd, the music lineup is expected to be a melting pot. Elevated on stage, hidden behind a curtain with only a puppet showing, attendees can sing trap puppet songs, R&B puppet songs, rock ballads, or even Elton John. There are no restrictions on genre.

“Who knows, the white lady from the ‘burbs in her 50s is going to come and rock, blow our minds,” says English. “Then some 25-year-old from Garfield. That’s something I really enjoy about puppetry, is when there’s a diverse audience and everyone’s cheek to jaw, elbow to elbow, and you just get lost in the puppet show, that’s fun.”