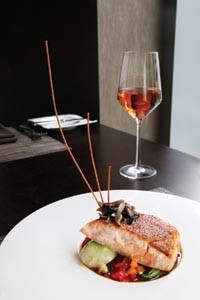 Habitat, the restaurant in Downtown's first new skyscraper in more than two decades, cuts an impressive figure. Located on the second floor of the Fairmont Hotel in the building known as Three PNC, the restaurant benefits from the hotel's magnificently modern lobby and dramatic access via a gleaming marble staircase. At the summit, the restaurant itself is a lovely series of moments, from the intimate bar near the entry and the sedate, dim dining room beyond, to the bright, pleasantly noisy seating adjacent to the open kitchen.

And we do mean open. Windows or slots are one thing, but Habitat's kitchen, like a stage, has no fourth wall; the counter that separates it from the dining room serves as the final prep area for sauces and garnishes. The kitchen staff diligently wipes down acres of gleaming stainless steel, while enameled cast-iron cookware adds practical spots of color. Probably the best viewing platform is a raised table, consisting of mighty slabs of polished tree trunk, in the middle of the room, somewhere between a chef's table and center-stage seats.

We were seated nearby, with views of the kitchen vying with floor-to-ceiling windows showcasing lower Fifth Avenue, Sixth Street and Liberty Avenue down to Gateway Center; our server came by three times before we managed to wrest our attention away from the views to the menu.

Of course, Habitat utilizes local and seasonal ingredients -- what new restaurant doesn't? -- but its emphasis is, interestingly, on their ability to adapt and update traditional dishes from around the world. The appetizers span the globe, including recombinations such as tandoor chicken tacos, while the entrée list consists of just three each from Asia, India and Europe, plus a steak offering that varies. Within this narrow range, the kitchen specializes in dishes prepared in the wok and the tandoor.

It isn't often that we see a menu so confident, so focused. We ordered, then sat back and waited to be amazed.

First among our appetizers came the tandoor chicken tacos, topped with matchsticks of crisp jicama, juicy watermelon and piquant peppers. We appreciated this colorful and palatable approach, as well as white meat that was well charred yet moist. But the mini flour tortillas were too small to actually wrap around the large chunks of chicken, making eating the tacos an awkward knife-and-fork affair, and were also quick to turn soggy under a wet filling.

Yellow-lentil broth with clams and Portuguese sausage was better balanced, texturally speaking, with large, firm lentils in a subtly spicy broth and three briny littlenecks sitting atop. Jason found the rare tuna in the tuna-avocado spring rolls to be almost mushy instead of meaty-firm, but Angelique liked its pairing with creamy avocado in tightly-wrapped cigar-sized rolls, perfect for dipping in a spicy ginger-jalapeño sauce, over airy-crisp rice-cracker "noodles." And if, in late April, we were puzzled to be eating such an autumnal dish as agnolotti -- er, ravioli -- of butternut squash in browned butter-sauce flavored with marjoram and pignola, we didn't question it: The dish was delicately warm, sweet, herbal and delicious.

Our first entrée -- buttery-tender, charred, yet rare ribeye steak -- proved to be spectacular. Its big beefy flavor was simply, perfectly accented by crystals -- not mere grains -- of salt and a tiny pitcher of jus. But the side order of baby vegetables, a pretty array of white asparagus, green beans, young carrots and baby bok choy, was almost uniformly undercooked. We like our vegetables firm, but these were scarcely short of raw.

Meanwhile, Jason's pad Thai, in a fairly straightforward, traditional preparation, was unaccountably heavy on soy sauce and featured a distracting array of shredded vegetables. In Southeast Asian restaurants, pad Thai is frequently offered as a fallback for diners wary of spice. But here, where it is one of only 10 entrees on offer, we expected a higher level of commitment from the kitchen.

Angelique had marinated Elysian Fields lamb with tamarind and green chili glaze. The lamb was a bit chewier than she would have liked. But the glaze -- more of a thick paste, really, with a bouquet of sweet, spicy and vegetal notes -- clung to the meat, but was good enough to eat with a spoon.

Our meal ended with perhaps its greatest success: chocolate pot de creme, in this case an extraordinarily creamy milk chocolate, firmer than a pudding and denser than a mousse, topped with bittersweet chocolate-coated cocoa nibs and whipped cream, and garnished with a leaf of dark chocolate. This had an intensity of flavor rarely achieved by milk chocolate, while the garnishes added both textural contrast and hints of cocoa's bitter side.

Perhaps we've become slightly spoiled. A decade ago, this meal would easily have surpassed anything else available in Pittsburgh. But the bar has been raised here, and we expect Habitat to raise it still higher.