Artist Trevor Paglen explores extraordinary-rendition sites and other "blank spots" on our maps. 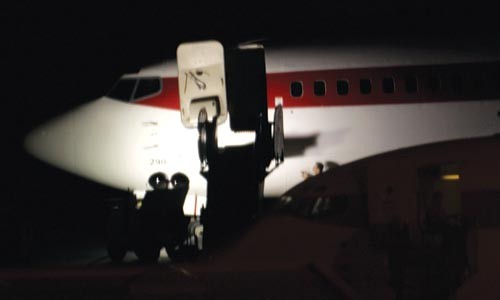 The photographs in Trevor Paglen's "Limit Telephotography" series often border on the abstract: blurred lines, hazy light, bulbous shapes of nothingness, like unfocused microscope shots or the manipulated negatives of Wolfgang Tillmans. But the cells in Paglen's photos are less often biological than they are sleeper. That's because his subject matter is the landscape of America's redacted geography: bases in the U.S. and abroad that simply do not exist, according to official maps and statements. Such sets of longitude and latitude prove our geography yet another victim of the modern information battle.

Paglen has entered the popular canon for his intrinsically political research. As co-author of Torture Taxi, he and investigative journalist A.C. Thompson exposed to the general public the watchword practice of "extraordinary rendition" as practiced by arms of the American government. His latest book, Blank Spots on the Map, recounts his exploration of the "black site" geography of American intelligence: military bases, prisons and intelligence-gathering offices whose purpose depends on remaining shrouded in secrecy.

Paglen's primary work, however, is as an artist whose practice is based on an understanding of geography, political will, science and technology. His photographs of "black" bases are part of the Experimental Geography exhibit at Carnegie Mellon's Miller Gallery (organized by New York's Independent Curators International). Paglen speaks to kick off the show-capping Jan. 28-30 Contestational Cartographies Symposium, co-organized by the Miller Gallery and CMU's STUDIO for Creative Inquiry.

Like much of Paglen's artwork, the photo series seeks to give visible shape to the usually shadowy world of 21st-century government secrecy.

"People ask me: Are they watching you? I ask them, Who is 'they'?" says Paglen, by phone from Berkeley, Calif. "People have this idea that there's this [single entity] 'they' out there, but the state is a very complicated, very contradictory thing. Is it the FBI? Or the CIA? Because the FBI hates the CIA. Thinking about [state secrecy] as a landscape allows you to be a lot more specific about what you're talking about -- and what you want to do about it."

One way Paglen does this is through his "limit telephotography." Employing methods for photographing objects in outer space, Paglen takes extremely long-range pictures of installations and bases. The result is sometimes unintelligible visually. But conceptually, it explores not only our rights to knowledge, but the meaning of that knowledge itself.

"It's about pushing vision as far as it will go, to the point that vision breaks down," says Paglen. "It's about, 'How do you know what you know?' That series was done in [the post-9/11 environment, in which] people were being arrested just for photographing the Brooklyn Bridge. Photography had begun to signify a really political act. ... Taking a picture of these things that weren't supposed to even be there, and certainly not to be photographed, is insisting on your right to take that photo."

As a leading figure in the artwork of experimental geography, Paglen engages issues of cartography and natural and man-made landscape phenomenon in several ways. Other photographic series have focused on well-known iconic landscapes -- albeit shot to include the light-trails of passing surveillance satellites. His Symbology collection of black-ops military units' unofficial insignia badges -- with slogans such as "Don't Ask! NOYFB" -- highlight the "symbology" of secret spaces. And his books manage to examine government secrecy while never hinting at "conspiracy."

It's an artistic practice that seems as natural to Paglen as it might appear groundbreaking to others.

"I wanted to think about the conditions under which art is produced and exhibited -- its political economy," he says. "These are questions outside the frame of thinking about art traditionally, but which geography solved."