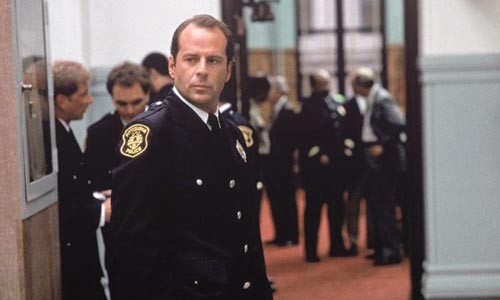 Reviews were unkind: The Washington Post complained that Striking Distance was "an ugly, unbelievable thriller ... a lame excuse for a few loosely connected chase scenes, full of macho piggishness, glaring inconsistencies and yawning plot-holes." The Chicago Sun-Times sniped that it was "an exhausted reassembly of bits and pieces from all the other movies that are more or less exactly like this one."

Years later, both star and director issued mea culpas. Willis apologized for the film during an April 2004 episode of On the Record With Bob Costas, saying it "sucked." Herrington, interviewed by the Pittsburgh Post-Gazette in May 2004, stated that Striking Distance was "not my favorite movie."

So what do they know? Not as much as City Paper readers, who voted Striking Distance into the top slot for "Best Pittsburgh Movie."

And why wouldn't we love a film that is a veritable fantasia of our rivers' amenities? A glass-fronted river-police HQ, complete with spiral staircase! Charming houseboats and riverside fishing cabins -- within city limits! Water so crystal-clear that we can see the last flicker of life ebb from the eyes of a submerged killer! Wide-open rivers, with nary another boat in sight!

Director Herrington, a Pittsburgh native who co-wrote the script, lays on plenty of ya-got-that-right shout-outs to the 'Burgh: Stagnos bread; TV news anchors Sally Wiggin and Ken Rice; and a character who self-identifies as a "Larimer Avenue dago." My favorite bit of local love is a blue-collar doubleheader -- a crazy wreck involving a Port Authority bus (going to "Pitt Stadium") and an Iron City Beer truck. (Only the old-timers might recognize the protagonist's favorite tipple: Sam Thompson rye whiskey, late of West Brownsville.)

And we can't deny these local realities, also captured by Herrington's camera: mooks driving drunk on the river; fisticuffs breaking out at the Policeman's Ball; and the occasional recreational boater going over an Allegheny River dam. Sure, we got local color -- and some of it skirts law-abiding.

That's why we relish a cop like Tom Hardy, the boozy, no-nonsense hero of Striking Distance. He's a millionth-generation lawman, but his code of ethics means that justice is sometimes about breaking rules and bustin' heads. Shooting flares at civilian cars; pistol-whipping a witness; stealing police files -- if you were this close to catching a serial killer everybody thought was you, wouldn't you?

Hardy may have troubling issues: alcoholism, rage, a family history of mental illness, a string of ex-girlfriends who turn up as river floaters. But he's got awesome street smarts, too. He gets those from his cop dad, whose maxim is the somewhat perplexing "Loyalty before all else except honor."

In the film's crackerjack opening chase scene, Dad, riding shotgun with Hardy in pursuit of the Polish Hill Strangler, barks out every Pittsburgher's favorite speedy shortcut: "Take Bigelow!" That the film shows them taking the same block of Bigelow over and over again just emphasizes what a great option this is.

It's during this extended chase that we first see Hardy's true-blue instincts at work. He instantly declares that the villain on the run "drives like a cop" -- which in this case means at a high speed, recklessly and magically transcending the real-world constraints of where Pittsburgh's streets actually go.

But reality be damned: That's some awesome San Francisco-style downhill-chase car-poppin', even if Center Avenue in Duquesne doesn't run between Mount Washington and Homestead.

Or maybe it does, if you've got mad local skills and know just where to turn. Who else but a Pittsburgher could see through the "macho piggishness, glaring inconsistencies and yawning plot-holes" in Striking Distance and decode this valentine to our intricately plotted, tough but fair hometown?