Although she was found not guilty of the most serious charge against her, Hill District resident Pamela Lawton won a bittersweet courtroom victory on Sept. 21.

For more than a year, Lawton has faced a charge of disorderly conduct and a slew of traffic offenses following a Shadyside traffic stop in August 2006. She was pulled over by city police officer Eric Tatusko on Kentucky Avenue, near Negley Avenue, for driving with expired vehicle-inspection stickers. The incident quickly swelled out of control.

Tatusko pulled his 9 mm handgun during the stop with Lawton and three children in the vehicle. Lawton has claimed that Tatusko pointed the gun at her child and threatened to "blow her head off" if she moved again. The officer denied the accusation and said Lawton's agitated state caused the situation to escalate.

The trial was postponed numerous times, but after a two-day trial, Common Pleas Judge Anthony Mariani found Lawton not guilty of disorderly conduct. Tatusko testified that she was loud and belligerent during the stop and refused to comply with his orders. Lawton said that she was relatively calm but did become more excited after Tatusko, standing on the passenger side of the vehicle, pulled his gun and pointed it in the direction of the van.

Several witnesses testified that Lawton waved her hands out of the minivan's window and yelled for help several times.

"My daughter said, 'He's going to kill us,'" Lawton testified. "I pleaded with him to come to my side of the vehicle and he refused, so I started screaming for help because I knew something was wrong."

An employee of a nearby nursing home, Ricardo Hill, testified that he was returning from his lunch break when he saw the vehicle stopped. He says he saw Tatusko aiming his gun directly into the vehicle. He said he also heard Tatusko say he would "blow their heads off."

For his part, Tatusko said he made no such threat and that Lawton was agitated from the moment he pulled her over. "I told her to put the vehicle in park and turn off the engine and she demanded to know why," Tatusko said. "She was very hostile and abrupt.

"She kept yelling at me to come over the driver's side and kept saying that she was an officer."

Tatusko testified that Lawton was screaming and reaching toward her purse and because she claimed to have been an officer he said he feared she could have a weapon. That prompted him to draw his gun.

Mariani found Lawton not guilty; she knew she wasn't a threat to the officer, he ruled, and thus her reaction to his gun could be seen as understandable and didn't rise to the level of disorderly conduct. However, Mariani unequivocally rejected claims that Tatusko ever threatened to shoot her or her children.

"I don't find it at all credible that this officer pointed a gun at a child and said 'I'm going to blow her head off,'" Mariani said. "I find it preposterous."

Lawton was fined a total of $650 plus court costs for the other charges, including driving with expired inspection stickers and no car insurance (although Lawton did produce a document indicating that she had an effective policy), plus failure to surrender registration.

Tatusko declined comment after the trial. In August, Tatusko was cleared by the Office of Municipal Investigation -- the department's internal-affairs unit. A complaint Lawton filed with the Citizen Police Review Board is still active, though it has been suspended pending the outcome of the trial.

Elizabeth Pittinger, CPRB executive director, monitored the trial with members of her staff. She said she will report the findings to the board and that board members can decide whether to move forward with the investigation or dispose of the case in some other way.

"Part of what we have to sort out now is taking the trial testimony and evaluat[ing] it against the witness statements we have collected to check the consistency or a lack thereof," Pittinger said. 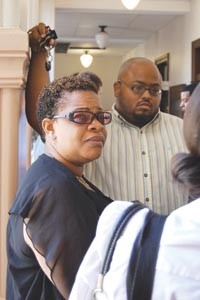