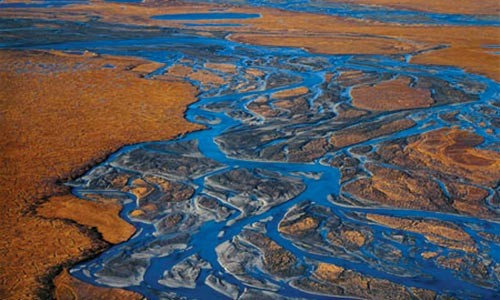 Reports of the clash between the Bush administration and conservationists frequently accompany discussions of the work of Subhankar Banerjee, who has spent the past six years photographing the richness of the indigenous wildlife and landscapes of Alaska's Arctic National Wildlife Refuge. Once, to justify the administration's oil-drilling program, ANWR was cynically described by former Secretary of the Interior Gale Norton as "a flat white nothingness."

Meanwhile, scientists warn that due to global warming, by 2060 this "white"-ness and the wildlife it supports will be gone. In Terra Incognita, his show at the Michael Berger Gallery, Banerjee reveals the diverse beauty of the ANWR in 15 large-scale color photographs taken between 2000 and 2002.

For two years, Banerjee lived in the ANWR with an Inupiat guide and friend, staying with Inupiat and Gwich'in families. He spent one year completing his documentation of the indigenous ecology; he spent another pursuing the area's soul, using medium-format and 35 mm cameras.

Most of the works in this show measure 30 by 40 inches, the formats capable of producing photographs of great detail. (Digital cameras would not have functioned in the extreme cold -- the wind-chill factor can drop to minus-100 Fahrenheit.) The prints themselves are high-quality digital images.

Environmental concerns aside, the photographs stand on their own as art. In "Hulahula-Okpilak Delta," swirling patterns of the bright indigo-turquoise river accentuate the richness of patches of sienna-colored earth. In "Rock Lichens," algae in shades of sienna, ochre, green, bright lemon and cadmium-yellow algae grow on slate-gray rock against the soft green tundra, white mist veiling it. It's beautiful, but foreboding: Global warming has brought non-indigenous algae to the Arctic.

Still, Banerjee's work readily suggests metaphorical commentary on environmental issues. Taken from the air, "Caribou Migration 1" (one of two photographs Banerjee calls a "Monumental," measuring 72 by 54 inches) depicts a herd of pregnant caribou reindeer migrating to their calving ground. At such a distance the caribou resemble ants, inspiring thoughts about how distance affects our perception of -- and hence our inaction on -- global warming.

The trails left by these animals on the snow, and the linear patterns that their progression forms, are undermined by a sinister gray crack in their icy path, intensifying our concern for the conservation of this area. Recent shocking images of polar bears drowning due to melting ice come to mind. Caribou are particularly vulnerable to disturbance in the two months before the calving period, and during it. In Banerjee's mountain landscape "Jago River," the tracks left over billions of years by caribou migration are subtly visible -- unlike our own less delicate imprints upon the planet.

"Unnamed Lake," meanwhile, depicts a lakeshore surrounded by "drunken" trees. Global warming is melting the permafrost in which these evergreens grow, causing them to tilt.

Banerjee's formal education is in science. Born in India in 1967, he moved to the United States in 1990, and here obtained master's degrees in physics and computer science. He worked for six years as a scientist at Los Alamos National Laboratory, in New Mexico, and for Boeing; in 2001, he left to photograph the ANWR.

In taking these photographs, Banerjee exchanged his scientific perspective for instinct, feeling and passion. In an artist's statement, he contends that art and the environment are inseparable, and says he regards the Arctic as the place where he "learnt to see."

In March 2003, in a decisive U.S. Senate debate, Sen. Barbara Boxer used Banerjee's work to demonstrate that the ANWR is not a frozen white wasteland. That day, the refuge was saved from drilling by a narrow margin of 52-48 votes. Scientists have since raised our awareness of the dangers of global warming; Banerjee's work translates these concerns visually, and demonstrates how art can influence public policy.