“Hark back to the days of homegrown horror, fuzzy fantasy, and raw, analog magnetism.” 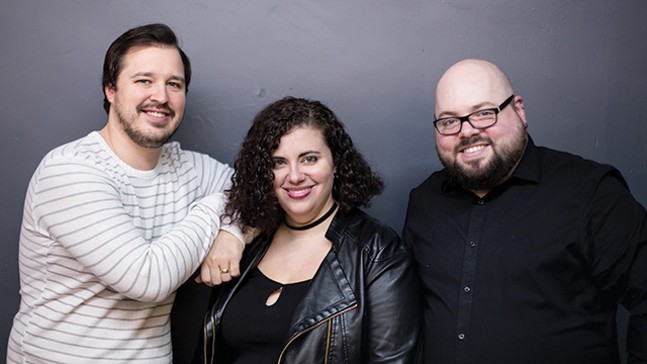 Brian Cottington and John and Elaine Wooliscroft of The Cinema Psychos

“It's pretty much your high school friends' basements, but with better beer.”

Enticing guests with the promise of brews and hot dogs, Row House will screen one “tantalizing tape” from the collection of Mike Valley, a local VHS/bad movie buff and creator of Video Valley, with the theater’s public relations coordinator, Travis Ayers, serving as host.

Joining Ayers onstage for a pre-screening session are the hosts of local podcast The Cinema Psychos: indie filmmakers Brian Cottington and husband-and-wife team, John and Elaine Wooliscroft. The group will record a mini-podcast episode about the film being shown and discuss its history and cult following.

John and Elaine Wooliscroft agree that VHS holds a great sense of nostalgia for people who grew up watching the format.

“Most people our age still have extremely fond memories of tapes, and there is something oddly comforting about older technology,” says Elaine. “Sure, there are easier - and some may say better - ways to consume media, and certainly, we've developed technology to make them look more beautiful, through digital restoration and remastering, but the memories we have of those movies will likely always be associated with the original VHS."

Invented in the 1970s, VHS – the acronym for Video Home System – offered an easy way for consumers to rent and watch movies in the comfort of their living rooms, and gave a platform to films – particularly those of the horror genre – that would otherwise never see theatrical distribution. Widespread during the 1980s and through the 1990s, VHS gave way to DVD, which then gave way to streaming platforms and the death of video store chains.

But much like vinyl, VHS has become popular again as a collector’s item, with film fans who grew up scanning video store shelves now seeking rare tapes to add to their collections.

“I love picking up random tapes at flea markets, either movies from childhood, or something completely random to try and make John laugh,” says Elaine.

Filmmakers have also paid homage to the format with titles like the 2012 horror anthology V/H/S and its sequel, V/H/S 2.

John adds that, in many cases, VHS is the only option.

“For big-time movie buffs, there may be a film they can get or watch any other way then on VHS,” says John.

While the Row House screening selection is secret, one thing is for sure – things are going to get scary, or, at the very least, weird.

“In Video Valley, we have all your dreams and nightmares on tape. Hark back to the days of homegrown horror, fuzzy fantasy, and raw, analog magnetism,” a promo for the event declares.