Pittsburghers of the Year: Floating Dumpster

The dumpster, full of rotting waste, festering in its own filth, floats with ease. 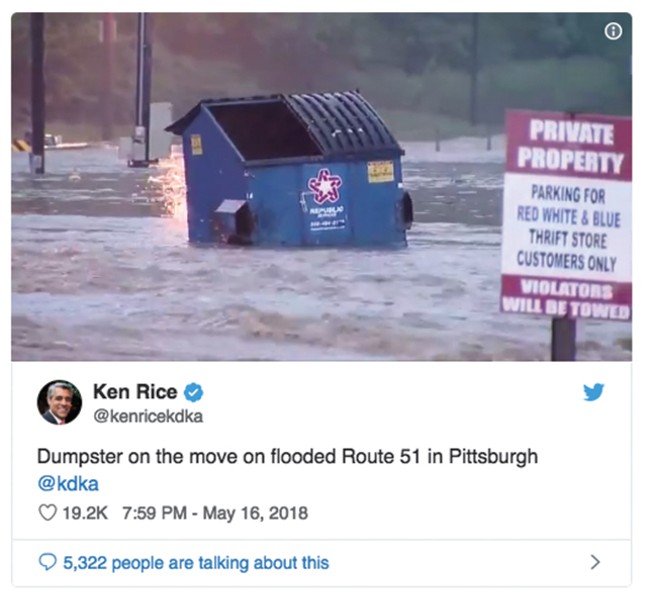 Dumpsters are, by definition, unglamorous. They exist to hold large amounts of waste and are therefore filthy, some might even say disgusting. In order for a dumpster to become a star, something truly special has to happen.

When heavy rains fell in the South Hills last May, the streets filled with gushing water. Then, a dumpster was caught on camera gently floating down the makeshift river of a state highway. An 18-second video shows the dumpster being carried along before halting and letting the flow of water beat against its walls. On Twitter, the video has been viewed nearly 10 million times.

Surely, dumpsters have floated before, but not quite as well as this one. Search "floating dumpster" on YouTube and dozens of videos of dumpsters in other cities come up, but none captured quite as clearly as this one. A star was born.

The video, which was first captured by KDKA photojournalist Fred Williams and shared by anchor Ken Rice, instantly it became a meme. People compared the wayward trash receptacle to their ex, themselves at the beach, and Ben Roethlisberger. The word "dumpster" started locally trending on Twitter. It was picked up by news and blog sites, both local and national. Some claimed Floating Dumpster would replace Dumpster Fire as a colloquialism for uncontrollable chaos.

But ultimately, the dumpster doesn’t need to be compared to anything else. Its swimming skills speak for itself.

Environmentally, 2018 was a trying year for Pittsburgh. It is currently our second-wettest year on record (with time still left to make it to number one). The flood in which this particular dumpster was dislodged was only one in a slew of heavy storms that damaged public and private property, canceled festivals, and caused landslides. It’s hard to find levity in extreme weather patterns, especially when climate science shows they will only get more severe and frequent, but Floating Dumpster let us laugh at the absurdity of it all.

Even without record-setting weather, this was a trying year for the city. From shootings — both police and civilian — to lives lost to the opioid crises, to nasty elections, to criminal priests. Processing these events can take a toll on the mind and the body. It can feel, at times, like the world is one giant dumpster, filled with dumpster people.

But it’s not. Even in the midst of extreme turmoil, there are still reasons to keep going. Instead of a symbol of chaos, Floating Dumpster can represent staying afloat, even when the waters are choppy.

To misquote F. Scott Fitzgerald: “So we beat on, dumpsters against the current …”