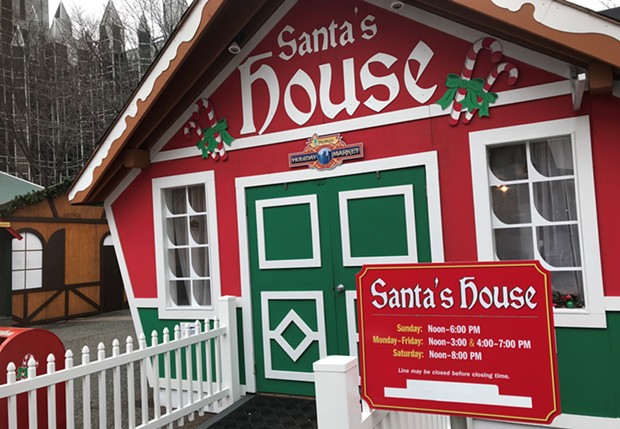 Upon discovery that Colcom has been the cash cow for several anti-immigrant groups over the years, advocates last week called for the foundation’s name to be removed from the market, as well as for other groups to cut financial ties with Colcom.

Over the weekend, Colcom and the Pittsburgh Downtown Partnership, the market’s organizer, accommodated part of that request and removed Colcom’s name from signage at the market. A large sign on the stage in the market has been removed and Colcom’s name has been taped over on a sign outside of Santa’s House.

The group of 13 faith, labor, and pro-immigrant organizations is declaring a partial victory.

In a press release, the coalition celebrates the decision by Colcom and PDP, but is still calling on PDP and the many other nonprofits that accept funding from Colcom to cut ties with the foundation.

“The Colcom Foundation funds groups that promote hatred toward immigrants and people of color," says Christian Acuna Castillo of local immigrant-rights group Casa San Jose. "These views are abhorrent and totally contrary to our values as a city and no civic group that embraces a diverse and welcoming Pittsburgh should accept support from a foundation that funds this kind of hatred.”

Colcom is known locally for advocating for environmental causes, including the controversial topic of population control. The foundation has donated to several Pittsburgh groups over the years, including Friends of the Riverfront, Pennsylvania Resource Council, Pittsburgh Trust for Cultural Resources, and the Western Pennsylvania Conservancy. 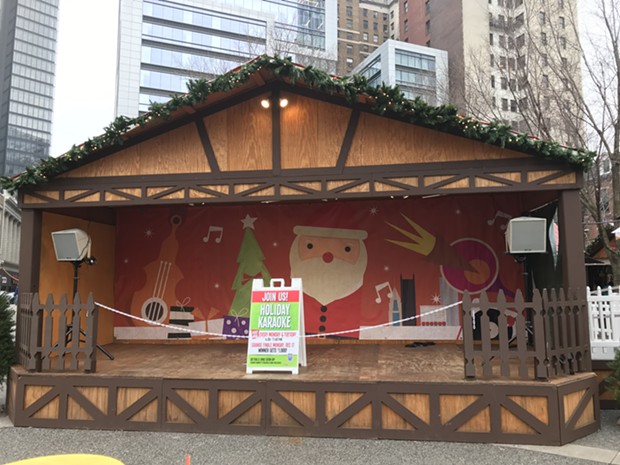 CP photo: Ryan Deto
Holiday Market stage is now without Colcom Foundation sign
However, according to 2016 tax documents, the majority of Colcom’s funding goes to groups that advocate for less immigration, including two groups that have been designated hate groups by the Southern Poverty Law Center.

Leigh White, spokesperson for PDP, issued a statement to Pittsburgh City Paper saying the group remains focused on “providing free, excellent, high-quality programming and experiences that welcome all to Downtown Pittsburgh” and that the Holiday Market serves in that capacity.

She notes the choice to remove Colcom’s signage from the market was Colcom’s decision.

“The recent attention regarding Colcom Foundation’s funding has deflected from our mission and the positive results which the Holiday Market generates, so at the request of Colcom Foundation we have removed signage from the market acknowledging their support,” said White in a statement. “The PDP encourages further community dialogue on this topic and will continue to focus on ensuring we produce events that are open to all, and support the development of a vibrant, welcoming Downtown.”

White didn't indicate whether PDP would be cutting any financial ties with Colcom.

For the coalition of advocates, this is just the first step in their campaign against Colcom. The groups are holding a joint press conference on Dec. 13 at noon in Market Square in Downtown to call on all organizations to end financial connections with Colcom.

“There are still progressive organizations, that do good work, who still take Colcom monies,” reads the Facebook page for the press conference. “That is unacceptable. It’s time for the PDP and other groups in our city to fully divest from Colcom and reject anti-immigrant violence.”
© 2023 Pittsburgh City Paper