We should all be working toward a better world 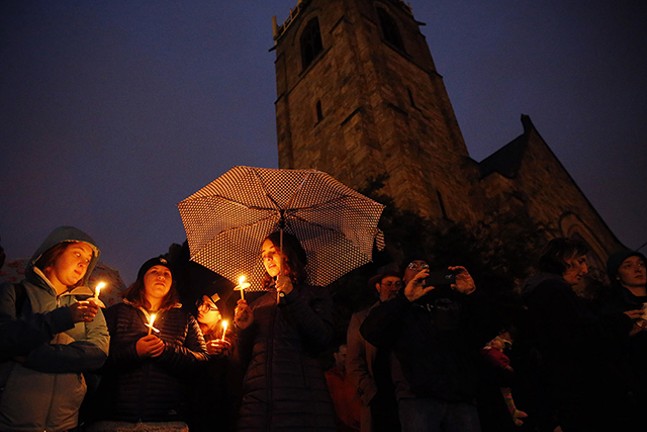 People often say that hate is a strong word. Sometimes I catch myself thinking things like “God I hate this cashier,” and then think again, “No, that’s too harsh. I just wish they were moving faster.” But sometimes the word isn't strong enough.

After the shooting allegedly carried out by Robert Bowers with an AR-15 that left 11 dead and six injured at the Tree of Life Synagogue in Squirrel Hill, people are saying what they always say after identity-based shootings.

"We have to stop spreading hate" or "There's no place for hate in this city."

Describing the carnage of mass shootings as “spreading hate” feels childish, like you were explaining the incident to a kindergartner. It’s not hate so much as learned disgust, bolstered by history and unobstructed by the government. It’s not spreading a feeling so much as inflicting a contained, but deep and gushing wound.

I never even felt that Jewish growing up, because I always knew people that were more Jewish. Sure, I went to Sunday school every weekend and Hebrew school twice a week and became a bat mitzvah. I've only been to Jewish funerals and weddings. But I didn't pray or believe in God or keep kosher or go to Jewish summer camp or speak Hebrew. Then I moved to southwestern Pennsylvania, where I made friends with people who had never met a Jewish person until college.

I've never been inside a synagogue in Pittsburgh and I don't feel especially connected with the Jewish community here, except that I know it's similar to my Jewish community in Washington, D.C., and all the other progressive, reform communities like it. It's hard to explain, even outside of this context, that Judaism is a religion and a culture, but not always both. It's hard to explain, because if I wanted to, I could blend in, pretend I wasn't Jewish, with no obvious name or facial identifiers to give me away.

Rarely is Jewish identity a simple concept. Some people are Jewish on both sides of the family, some only half. Some have a lineage fractured by the Holocaust. Some weren't raised with religion, sometimes because the Holocaust wiped out their faith. Others are only Jewish culturally, raised with the food and humor. Some look at Israel with love and adoration, others with disgust. If someone asks if you're Jewish, you could give the answer that feels truest to your identity, or you could give the answer that would’ve counted in the concentration camps. But Robert Bowers only cared about one of those things when he yelled “all Jews must die.”

After learning about the shooting, one of Trump's initial responses was to say, "If there was an armed guard inside the temple, they would have been able to stop him." He is apparently unaware that most places of Jewish worship have security guards, sometimes only during the High Holidays, sometimes year-round. Most people who have never attended Jewish services are probably unaware of this fact.

As a kid, I thought it was silly and unnecessary. But I knew that terrorist attacks were possible — there were at least two in the D.C. area by the time I turned 7. And I knew our people's history, and that even though anti-Semitism didn't feel as prominent as other forms of discrimination or bigotry, it was always ready to make a return.

It was surreal when, during the Unite the Right rally in Charlottesville, Va., white men in polo shirts marched through the square with tiki torches, yelling “Jews will not replace us!” But then someone died and the president wouldn’t even let the murderers take the blame.

The shooting hurts most deeply because, when I think about what I’ve retained from Judaism, it’s the simple idea that we should all, at the end of the day, be working toward a better world. Because so many of our ancestors fled persecution (Holocaust, pogroms, or otherwise), there is a sense of duty to make sure that other minorities, other immigrants, other people who are suffering in ways our people once did, have our support. Robert Bowers was particularly infuriated by the Tree of Life synagogue’s work with HIAS, a refugee organization originally founded in 1881 to help Jewish refugees, and now helps refugees from all over the world. Bowers called them “invaders that kill our people.” He understood the concept of Judaism helping those in need, he just didn’t think they deserved help.

To both Jews and gentiles, the definition is foggy. It’s unclear what exactly makes someone Jewish, and whether it’s something that must be actively practiced or whether it’s in your DNA. After the shooting, there’s been plenty of infighting about identity. It doesn’t really matter in the end though. Not Nazis, not Robert Bowers, not the next person to inflict an anti-Semitic attack, care whether you fast on Yom Kippur or eat shellfish every day. To them, you’re Jewish, and that’s enough.