"Some of the feedback that we’ve received has caused us to do the thing that the author doesn’t want us to do purely out of spite." 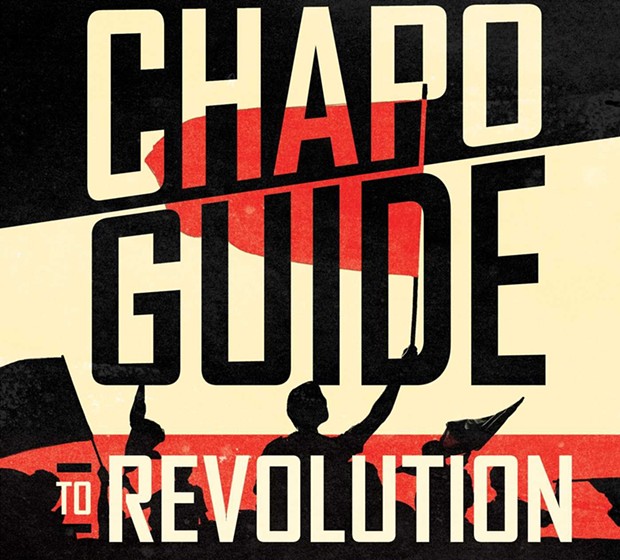 The latest political and cultural embroilment surrounding Brett Kavanaugh’s incredibly unconventional saga to join the U.S. Supreme Court has been just one of many revolting, distressing, and exhausting political controversies since 2016. But whether it’s Kavanaugh or another one of his equally ghoulish contemporaries who could take the seat, the near and distant future of our country’s leadership is bleak. For those on the political left, this is a hellscape, and no media organization has better captured that sense of all-encompassing frustration than Chapo Trap House.

Initially, Chapo was just a way for founders Will Menaker, Matt Christman, and Felix Biederman to share discussions about national politics and pop culture with a small group of friends online. However, in the heat of the 2016 primaries, it quickly found a massive leftist audience that felt both horrified by the right, and disenfranchised by establishment Democrats. Menaker and Co. added two other hosts, Virgil Texas and Amber A’Lee Frost, and Chapo became the first podcast to earn $100,000 per month on Patreon.

Today, it’s one of the most popular podcasts in the world, and in August, the hosts released a book titled The Chapo Guide to Revolution: A Manifesto Against Logic, Facts, and Reason, that presents their vitriolic stance on both Republicans and Democrats through their ruthless style of class-conscious humor. During its first week, it landed at #6 on the New York Times best sellers list.

On Oct. 7, the Chapo crew will be begin the Midwest portion of their live tour at Mr. Smalls Theatre. City Paper spoke with Menaker, Christman, and Texas about the book’s reception, the constant hate mail they receive, and their week-long stint in Pittsburgh back in 2017.

So the book came out about a month ago now. Has the reception so far met your expectations?

Menaker: I never quite knew what to expect. I knew we would have a pretty solid turnout, but hitting the bestseller list our first week, that was a pretty good hurdle to clear. I’ve now authored a book that’s sold literally 10,000 more copies than any book I ever edited when I was still working in publishing. So yeah, it’s met my expectations.

Christman: People we don’t like got mad about it, which was cool.

Who got the maddest?

Christman: Well, the one that everyone sort of rallied around was the Bill Scher article in Politico. It was kind of embarrassing and flailing and everyone who upped it was an absolute gargoyle, so that was a good day.

Texas: And props to [Bill Scher], he was the only one to throw a punch. Every other mealy mouthed person that we regularly harass on our program had to rally around that, and quote-tweet it and go, “hmm, interesting.”

In making the book, were you trying to write something that would appeal to people beyond your established fan base, or were you just writing something that you know people who already like your show would enjoy?

Menaker: When I was writing the book, that was never really calculated in my head. I thought if we laid out our view of politics and history, and things that inform our worldview and sense of humor, I think that would certainly appeal to any random person who’s vaguely sympathetic with left-wing politics who’s never heard our show. Or maybe it's not our natural, extremely online constituency.

Texas: The book’s not a companion to the show or anything like that. We tried to write it where it would appeal to a broad audience of not just people who are sympathetic to our point of view, but especially to apolitical people.

Christman: A lot of that experience comes from coming across books that you might not have been seeking out, and having them kind of affect your worldview. And that really to me is the hope of the book. People coming across it and maybe finding something in there that is attuned with their growing, maybe unconscious but still deeply felt, intuitions about the world, and could help shape their worldview. That would be really rewarding.

How does the live show differ from the podcast? Or do you try to keep them relatively similar?

Menaker: Because it’s a live show and we’re really working without the safety net of editing, if a bit or a digression doesn’t land at all, you’re up there on stage in front of people who have paid to see you. So I think we plot out the live shows a little bit more than a regular podcast episode where it’s just us sort of talking in one of our apartments.

How often do you receive emails from offended listeners?

Which political faction do you get the most from?

Texas: It’s definitely leftists. People who are ostensibly fans of the show, who subscribe to the show, who theoretically enjoy the show because - why else would they listen to it? And they take issue with any number of things. A joke that Felix tells that they don’t understand that they take as a serious statement of facts. And they have to quibble with that.

How do you respond to them usually?

Texas: I either ignore it or I respond to it with, “This email address is no longer in service.”

Have there been any critiques of your show that have really resonated with you and caused you to change something about the way you approach a conversation or a topic?

Menaker: [using an Obama impression] Let me be clear. We, at Chapo Trap House, and the folks who run it and host the show, do not brook even mild criticism of us — from anyone.

Texas: Some of the feedback that we’ve received has caused us to do the thing that the author doesn’t want us to do purely out of spite.

Christman: I don’t think it’s right to say that we’ve never responded to criticism internally. But I think it’s a process of coming to terms with things through our own thoughts on the subject and by the totality of the response we get. I don’t think we’re ever responding to individual complaints like the manager of a Fuddruckers or something. But we do want to make the show better and more responsive to actual issues going out in the world, and we want to say things that we think are true. And we want to be aware of blind spots and stuff like that, and that’s a process that we go through internally. But it’s not because of individuals writing into the complaint box or something.

Texas: We’ve never changed course because of some heroic poster who pointed something out that we didn’t already know. Some genius who should absolutely have their own podcast, because clearly from the tenor of their comments it would be vastly more successful than ours.

So I know you had Jake Flores come on and describe his bizarre encounter with [U.S. immigration officials] ICE after his Twitter jokes about them. But considering how you guys often verbalize jokes that are equally vicious, has anything like that ever happened to any of you? Emails? Strange confrontations on the street? Cryptic messages?

Menaker: Nope, knock on wood. Not even close.

Christman: It’s too bad because that’d be good content, but no.

Menaker: The closest thing, and this is like several miles away from law enforcement. But the closest thing that’s ever happened to me was Eric Garland and his band of fellow travelers delving deep into my family history and my grandfather’s story to concoct a narrative about how this is a generation’s long intelligence op being run by the KGB or [Russian secret service].

You ever have anyone coming up to you on the street in a “punch a Richard Spencer” type scenario?

Christman: The people who hate us are inveterate online posters. They’re too frail and sickly to go outside of the house at all, let alone engage in a physical confrontation.

So you guys lived in Pittsburgh for a week or so a year-and-a-half ago, right?

Menaker: Not only that, we wrote the proposal to the book in Pittsburgh.

Why were you guys here for an extended time?

Menaker: We were [in Pittsburgh] to do a live show with our friends Brett and Brian from Street Fight, who invited us to join them and just to sort of hang out in Pittsburgh. I have sort of a semi-Pittsburgh connection with my friend and former author Jacob Bacharach, who’s a native stud of Pittsburgh and Western Pennsylvania. We just sort of spent the week in Pittsburgh in this house, and it was actually really productive because we were just ordering chicken wings and wrote the book proposal that led to the book that’s now published.

So because you have a decent idea of the city’s culture and general feel, I’d like for you each to tell me your favorite and least favorite things about the city. With ruthless honesty, if need be.

Menaker: My favorite thing about the city is all the wonderful bridges. And I love the trollycar incline.

Texas: My least favorite thing was the casino, those slots were not the loosest in town. And my favorite has to be the bar scene. There’s a lot of great bars we went to there. We went to one which had blown up apparently a few nights earlier but they were still open.

Christman: My favorite is PNC park, one of my favorite parks in the major league. I guess I haven’t spent enough time there to get annoyed by anything. To me, Pittsburgh is the ideal Rust Belt town. It’s like the best one.

Menaker: My feelings about Pittsburgh are almost universally positive. If I would have to go in, I would say that the Carnegie museum, I found a little lackluster. They had some good dinos, but you know.

Christman: Apparently the water’s very bad. We’ll be bringing crates of Fiji with us to avoid dealing with that.
__