Those who knew Mac Miller share memories of the musician in the wake of his death. 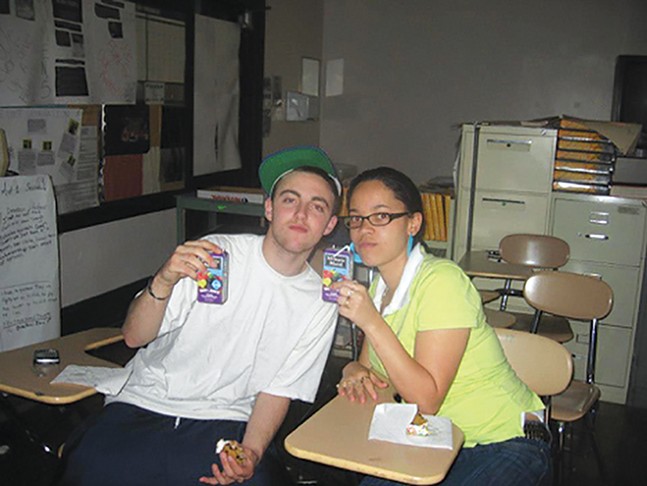 Mac Miller made it big as a hot young talent with a bright future in the music industry. But in the wake of his death, many in his native Pittsburgh remember him for more than his music — as Malcolm McCormick, a student, a performer, and a son dedicated to and loved by his family.

“I remember him as a serious music student,” says John Maione, a performing arts teacher at Winchester Thurston School who taught Miller music during his freshman and sophomore years. “His knowledge, intensity, and seriousness regarding hip-hop and rap music was inspiring.”

He recalls Miller as a leader in his class for Musical Instrument Digital Interface (MIDI). “I still have the CD of examples he shared and analyzed with everyone,” says Maione.

Kimberly McDonald also keeps a musical memento from her days as Miller’s 11th grade English teacher at Taylor Allderdice High School — a copy of his early mixtape The Jukebox: Prelude to Class Clown with the note, “To my favorite English teacher.”

“It’s one of my prized possessions,” says McDonald.

She and Taylor Allderdice student-social worker Debra Gentner each paint Miller as a friendly, well-liked young man who injected humor into his studies and his art. “His early music was fun,” says Gentner. “He connected with kids in a fun way, he was always smiling”

McDonald goes on to describe him as “one of those students that a teacher loved to have in class.”

“He was insightful. He had intelligent comments. He added to class discussions. He was great with literature and poetry. Go figure, right?” she says with a chuckle.

Even after he graduated, Miller returned to Taylor Allderdice to perform at the prom. He also made an appearance at the school when he returned to Pittsburgh in 2013 to accept a Key to the City during a ceremony declaring September 20 as Mac Miller Day.

“He continued to want to have Pittsburgh be a part of him,” says Gentner.

She adds that he was also very dedicated to his family, a characteristic supported by an experience once had by local music figure, Justin Strong. Miller honed his craft during emcee tournaments at Strong’s former East Liberty club, Shadow Lounge. While the two were never close, he fondly recalls seeing Miller grow as an artist “from the Easy Mac days to signing with Rostrum Records.”

In 2013, Strong had a chance encounter with a member of Miller’s family when he performed as a storyteller at the Moth Mainstage at the Byham Theater.

“I told the story of the beginning and survival of the first two years of the Shadow Lounge,” says Strong. “After the event, I'm mingling through the crowd. An older lady comes up to me, and says, ‘Hello, I'm Mac Miller's grandmother. I always wonder about [Shadow Lounge] he would go to ...’ I remember giving her a big hug. We talked a little longer on Mac's success and how proud she was of him.”

He shares the moment to emphasize Miller’s image, not as a famous musician, but as an individual with a loving family, a humanizing detail that often gets lost in the hype following any celebrity death.

“As impactful as Mac was on the music scene locally and internationally, the important take away is that he made his grandmother proud,” says Strong. “If we can all just live our lives — faults and all — with the goal of making our grandmothers proud, I believe we can leave the world a better place from which we found it. And Mac Miller did just that.”

McDonald has already seen the connection Miller made with students through his music.

“I have students who have said that even though they did not know him, they knew him through his music and they would listen to it while they were attending high school,” says McDonald. “He impacted even those students that came after him.”

Gentner believes Allderdice students who interacted with Miller also experienced the smiling, funny kid she knew. “The kids remember that, and I know it’s also hard for them to accept that he’s gone,” she says.

Maggie Cook, co-owner of Frick Park Market, fondly remembers Miller as a teen who performed and sold CDs in front of her Point Breeze business, where he and his family had a tab. He honored the small sandwich shop with track on his 2011 album Blue Slide Park. He also filmed a music video there.

Cook says hundreds of Mac Miller fans have visited the market over the past seven years, including around 400 that have come since Miller’s death.

“Most importantly, Malcolm was a kind, gentle, personable, talented young man, a deep, deep soul who wanted to embrace the world in his uncompromisingly honest music. I treasure the fleeting time I was privileged to spend with him,” he says. “The world will mourn Mac Miller, but the Malcolm I knew will always be fondly remembered.”