The combination of ambitious and well-known church leaders, a large Catholic population, and the horrifying details of predations have echoed across the region. 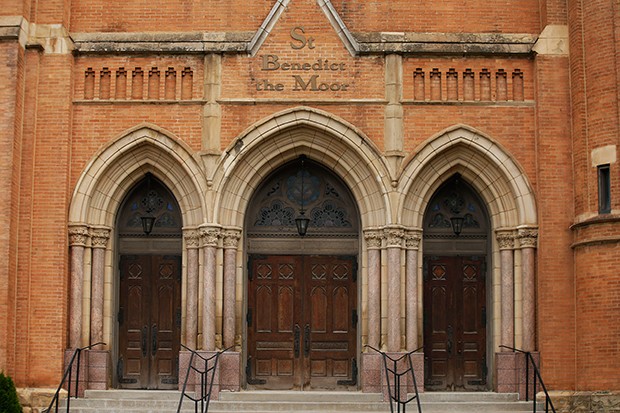 A Catholic school in Cranberry that bears Cardinal Donald Wuerl’s name was vandalized on August 20. Wuerl was Pittsburgh’s bishop for almost two decades and has been implicated in allegedly covering up abuse by other priests. An online petition to remove Wuerl’s name from the school has gathered thousands of signatures.

The Survivors Network of those Abused by Priests (SNAP), held a protest on August 20 outside the Pittsburgh Diocese headquarters Downtown. SNAP protesters were asking for church leaders to support state legislation that would provide accountability to abusers, which the Catholic Church has historically opposed.

It’s not just devout Catholics that appear to be impacted. Pittsburgh has a large Catholic population, but the faith's influence also has a palpable influence on the region's secular culture.

The Steelers most famous play, the Immaculate Reception, is a reference to the Virgin Mary, mother of Jesus. The franchise is owned by one of the country’s most prominent Catholic families, the Rooneys.

March and April in Pittsburgh are marked by Lenten fish fries. In summer, church festivals provide small towns and neighborhoods with entertainment. Many ancient Catholic churches, now without parishioners, act as community centers, apartments, and gyms. One of the region’s most famous breweries occupies an old Catholic Church. Catholicism's ubiquitous influence on the region's culture is possibly why Pittsburghers are struggling to reconcile something so integral to the area also causing so much pain.

In total, 301 priests were identified across Pennsylvania. More than 1,000 victims offered detailed accounts of abuse. A grand jury believed the actual number of abused children was in the “thousands.” Shapiro said the two-year investigation is the nation’s most comprehensive report on child sexual abuse within the Catholic Church.

The 99 priests linked to Pittsburgh is the highest number of any Pennsylvania diocese investigated in the report. (The dioceses of Philadelphia and Altoona-Johnstown were excluded, as they were the subject of previous investigations.)

Church leaders with ties to the area, such as Pittsburgh Bishop David Zubik and his predecessor Cardinal Wuerl, are receiving intense criticism alleging they played a part in covering up the alleged abuse. Actions against Pittsburgh-area Catholic institutions, whether protests or vandalism, appear to be growing in frequency.

The scandal is reverberating loudly in Pittsburgh. The stories of the victims here are terrifying. And other factors may be adding to the report’s repercussions on the region. Pittsburgh is home to a high number of ambitious religious leaders with growing profiles. The city has the largest total number and percentage of Catholics of any diocese investigated.

These circumstances appear to be intensifying the impact of what was already a mammoth report on church abuse.

First and foremost, the stories of Pittsburgh’s victims have rung loudest. According to the report, Pittsburgh priests allegedly used “whips, violence and sadism in sexually assaulting their young victims.” Priests also allegedly created a child pornography ring, and circulated photographs among parishes.

On top of those alleged atrocities, there are easily identifiable figures to cast blame. Cardinal Wuerl currently serves as the Archbishop of Washington. Wuerl was Bishop of Pittsburgh from 1988-2006, and the report alleges he was involved in covering up some abuses.

Wuerl has defended his time as Pittsburgh’s bishop and denied these claims, but he has not escaped criticism. Shapiro told CNN on August 19 that statements from Wuerl are additional evidence of a “cover-up.”

“Cardinal Wuerl is not telling the truth,” said Shapiro. “Many of his statements in response to the grand jury report are directly contradicted by the Church's own documents and records from their secret archives.”

Another factor that could be echoing the grand-jury report in Pittsburgh is the region’s especially large Catholic presence.

The counties that make up the Pittsburgh Diocese region – Allegheny, Beaver, Butler, Greene, Lawrence, and Washington – have the highest percentage of Catholics of dioceses mentioned in the report. More than 630,000 Catholics comprise 33 percent of the region’s population. Historically, this number was even higher (46 percent in 1980), and that legacy has led to a religious stronghold and a secular population familiar with Catholicism.

Pittsburgh has produced church leaders that have gone on to represent high positions in the Catholic Church. Four Pittsburgh bishops have eventually held the title of cardinal, a position appointed by the pope. The last two Pittsburgh bishops to receive promotions, Wuerl and Anthony Bevilacqua, were elevated to cardinal within four years.

For Pittsburgh to host ambitious and successful bishops and serve a large number of devout and non-practicing Catholics, while also simultaneously having the largest number of predatory priests, is a contradiction that has left many Pittsburghers feeling unsettled.