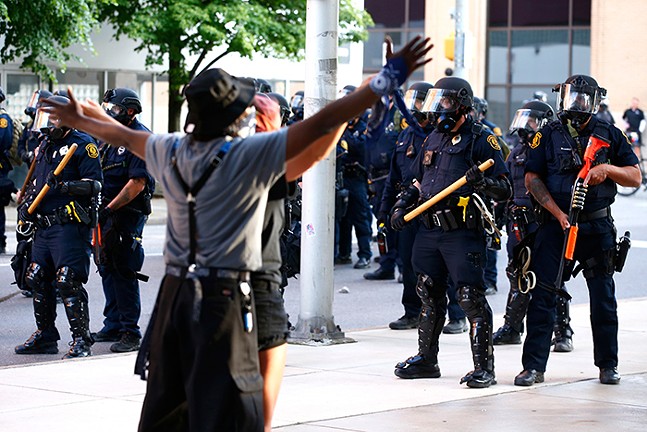 CP photo: Jared Wickerham
Protester during a Black Lives Matter demonstration in East Liberty on June 1, 2020
According to court documents, "failure to disperse" misdemeanor and other charges against at least 15 people who were arrested by Pittsburgh Police while participating in Black Lives Matter protests in Pittsburgh on May 30 and June 1 of 2020 have been refiled. These refiled charges occurred over a four week span from late January to mid-February, and came a month before the Associated Press revealed that a Facebook group with thousands of members, many former or current Pittsburgh-area police officers, showed bias against Black Lives Matter protesters, calling them “terrorists” or “thugs.”

Another protester who participated during the May 30 protest in Downtown Pittsburgh also saw refiled failure to disperse charges, but paperwork indicates those charges stem from Dec. 17, 2020, possibly a clerical error. There doesn’t appear to be any protests that occurred on that date.

Last summer, Allegheny County District Attorney Stephen Zappala dropped charges against 61 people from the May 30 and June 1 Black Lives Matter protests. Then, Zappala cited insufficient evidence for the charges, which were mostly for failure to disperse. But in January 2021, Zappala announced he would be refiling charges against 24 of those protesters, and said this was at the request of Pittsburgh Mayor Bill Peduto. The mayor denied this and accused Zappala of spreading “disinformation.”

When Pittsburgh City Paper reached out to ask about the arrests in January, the Pittsburgh Police, the mayor’s office, and Zappala all pointed fingers at one another as to who was responsible for the renewed charges.

Either way, the 16 people now facing renewed charges come at a time when the Associated Press reported that a Facebook group of more than 2,200 members, many of them former and current Pittsburgh-area police officers, carried on for nearly four years, sharing transphobic posts and bullying members who supported anti-police brutality protesters, according to AP.

A spokesperson for the Pittsburgh Department of Public Safety said the department has no comment on the refiled charges against the Black Lives Matter protesters.

The Facebook group reported by AP is just one example of local police showcasing bias against people protesting police brutality. In August, City Paper reported on a West Homestead police sergeant who tweeted that Democrat-run cities that have seen an influx of Black Lives Matter protests should “do nothing but the minimum that is required to not get sued or fired” and to “Let it burn.'' And last summer, Pittsburgh Police sergeant George Kristoff’s Facebook feed was full of racist memes insulting Kamala Harris and Black children, as well as posts insulting Black Lives Matters protesters. In response to stories about Kristoff, Pittsburgh Police revised their social media policy to emphasize that officers may face discipline for online comments, but a police spokesperson couldn't discuss if Kristoff was still employed at the department, according to AP.

Allegheny County Councilor at-large Bethany Hallam (D-North Side) has renewed calls for county council to create a countywide citizens police review board in the aftermath of the AP report. The city of Pittsburgh currently has a citizens police review board. She also said the bias showcased in the Facebook group is another reason to divert funds from police departments and use those to “fund supportive services in their place.”

“I don’t think this evidence of racism in local police forces is really news to anyone who has lived here for any period of time,” says Hallam. “The entire institution is inherently biased, and I hope the legal representation for anyone charged with a crime starts looking into the online activity of officers and judges involved in their clients’ cases and respond accordingly.”

The renewed charges against Black Lives Matter protesters are mostly for misdemeanor failure to disperse charges, but also include some misdemeanor disorderly conduct charges and one misdemeanor obstructing administration of law charge. In January, Zappala said the charges would be refiled as summary offensives (which are lower than misdemeanors). He also said that 24 people would be charged, not 16. When asked about these discrepancies in January, his office said questions about the charges should be directed to the Pittsburgh Police. The police said questions should be directed to the DA or the mayor’s office. The mayor’s office said it couldn’t comment, due to ongoing investigations.

One of the people facing refiled charges, Jay Yoder, told CP in January that they questioned why they were being recharged at all, saying they have video evidence of themself complying with officer’s orders shortly after police cleared the street on June 1. Yoder’s lawyer Christine Elzer was also suspicious of the refiled charges. Yoder is named in the class-action lawsuit filed against Pittsburgh and its police force for their aggressive actions on June 1. They are the only person facing renewed charges, and eight people of the 16 have seen renewed charges in relation to events of June 1, where protesters were met with tear gas, sponge rounds, and pepper spray.

Elzer says she doesn’t know if any officers involved in the renewed charges were active in the Facebook group, but says the group confirms some assumptions about police officers.

“These officers show what many of us already know, that there is open bias against protesters, and transphobia and racism are present in police departments,” says Elzer.

She also says that the Facebook group is more evidence that police officers treat certain kinds of protesters differently than others, and can be openly hostile to those protesting police brutality. She notes the disparate arrests of those charged in the Capitol insurrection, and also notes how an April 2020 anti-quarantine protest in Downtown Pittsburgh didn’t have any arrests or any aggressive response from police.

“It is a story about how police really negatively view those police-brutality protesters and how they respond with more arrests,” says Elzer. “I think it would have to feel for those facing renewed charges like the police aren’t here to protect and serve them and that they are their enemy and that is not how anyone should feel.”