Behind the Buttons:
You're probably here because you were gifted a Pittsburgh City Paper pack of buttons — or bought some for yourself! — and want to learn more about the stories behind the images. Awesome! (If you haven't yet purchased a set, you can do so here.)

Pittsburgh Pop Culture
1. Pittsburghers are some of the biggest zombie fans in the world. Why? George Romero's iconic Living Dead movies were filmed in the region, including Dawn of the Dead, which was filmed almost entirely inside the Monroeville Mall. Romero himself attended Carnegie Mellon University, and there's a Living Dead museum in the mall where the movie was filmed.
For more reading:
• An oral history of Night of the Living Dead
• A Film Lover's Tour of Pittsburgh
• Living Dead Museum gets back to zombie business at Monroeville Mall
• The story behind Andy Warhol's transformation into a zombie by Pittsburgh's renowned makeup artist Tom Savini
• City Paper's Coloring Issue gets Zombified

2. In October 2019, a Port Authority of Allegheny County bus became an instant legend when a sinkhole partially swallowed it on 10th Street in Downtown Pittsburgh. Instantly nicknamed the "sinkhole bus," the event caused the back half of the bus to be sunk underground and the top half of the bus to be raised at a steep angle, much to the delight of many onlookers who stopped to gawk and take photos. Luckily, no one was seriously injured in the event. There was one passenger on the bus at the time who was treated for minor injuries, and the driver was unharmed
For more reading:
• What's the deal with the Pittsburgh sinkhole?
• More info about sinkholes, from an expert
• Commemorate this holiday season with the 2020 Repaired Sinkhole Ornament

3. Shortly before noon on Jan. 1, 2022, reports of a loud boom and ground shaking were reported all over the Pittsburgh region. Five hours later, the National Weather Service revealed the cause: a likely meteor explosion. We're celebrating the Pittsburgh meteor with a button, but we're not the first. Pittsburgh artist Toby Fraley, who also designed a sinkhole bus ornament, designed a commemorative ornament for the meteor as well.
For more reading:
• Pittsburgh meteor, "the greatest event of 2022," made into commemorative ornament

4. Furries, fans of anthropomorphic animals who have been holding their annual Anthrocon convention in the city since 2006, are well loved by Pittsburghers. Tons of locals come to the city during Anthrocon weekend to spot the visitors, including during their annual Fursuit Parade, which marches hundreds of costume characters through Downtown streets. Pittsburgh is home to lots of furries of its own too, and City Paper has been lucky to have met a bunch over the years.
For more reading:
• The origin of how Pittsburgh and furries fell in love with each other
• Furry friends: Pittsburgh restaurants welcome Anthrocon furries with specials, signs and long straws
• Furries are artists, and Anthrocon is their Sotheby's
• Yinzerrific Coloring Book artist profile: Berry Meat and her superhero Pittsburgh Anthrocon furry
• Meet the Pittsburgh designer creating fursuits for the furry community 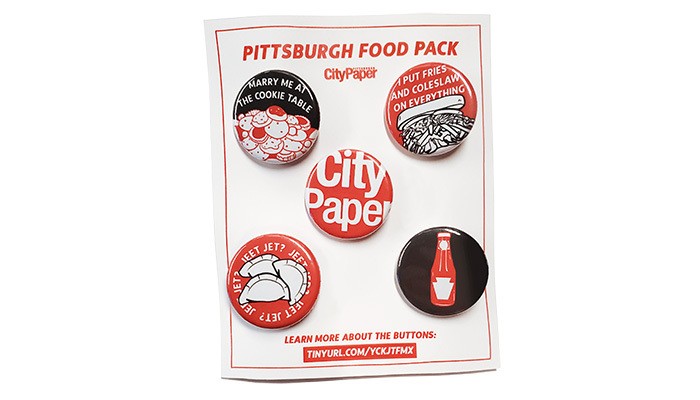 Pittsburgh Food Pack
1. If you've been to a wedding in Pittsburgh, it's likely you've seen the glory that is the Pittsburgh Cookie Table. The local tradition typically involves family members spending days baking cookies of all shapes and sizes, presented on a long dining table at the reception. Next to the cake, it's pretty much the best part of the night. Guests are often given a box to take leftover baked goods with them when they leave too.
For more reading:
• Yinzerrific Coloring Book artist profile: Trenita Finney and her overflowing Pittsburgh cookie table
• Where to find cookie table treats for the Pittsburgh wedding season

2. Pittsburghers are notorious for putting french fries on everything, from salads to sandwiches. One of the most popular local chains is Primanti Bros., whose sandwiches are stacked high with both french fries and coleslaw. Many other restaurants have tried to imitate it, creating their own versions with the ingredients. In other cities and states, they often call these "Pittsburgh sandwiches" on the menu. (Pro tip: They taste best when being used to absorb multiple beers.)
For more reading:
• The Rivalry Issue: Food Fight — Pittsburgh's own Primanti's sandwich vs. Cleveland's Polish Boy
• Best Late Night Bite / Best Pittsburgh Smell: Primanti Brothers

3. Jeet Jet? In case you're from out of town, that's Pittsburghese for "Did you eat yet?" And we have plenty of places to choose from if you're looking for a new restaurant or cuisine. One of the locals' favorite eats are pierogies, the Polish pasta pockets full of filling ingredients like mashed potatoes and onions, sauerkraut, and more. They're so popular locally that the Pittsburgh Pirates even have a race during every home game where pierogie mascots run the bases.
For more reading:
• Pittsburghese Dictionary: How to Talk Like a Yinzer
• J'eet Jet? Pittsburgh City Paper announces its first ever Pittsburgh cookbook
• Why do the female pierogi racers have purses?

4. Ketchup is the Steel City's favorite condiment. Why? Pittsburgh is home to the headquarters of the Heinz Company, most famous for producing Heinz ketchup. While it's no longer made in Pittsburgh, locals tend to throw a fit if a restaurant tries to use a different brand. Or an amusement park. When Kennywood tried to serve another ketchup at its park, so many locals complained that it ended up bringing it back.
For more reading:
• How Heinz is navigating a national shortage of ketchup packets
• Lock this condiment purist in the Heinz ward
• Heinz released newly concocted condiments for Canadians. Let’s hope Pittsburgh is next

Pittsburgh Landmarks
1. Pittsburghers love its bridges, and boast about having some of the most in the world. Three of the most popular are the "Sister Bridges," a trio of identical, yellow-painted bridges connecting Downtown Pittsburgh to the North Side. Locals have held festivals on the bridges, walked across them to get to Pittsburgh Pirates games, hung up love locks like Parisians, and have even yarn bombed one. But it's not all great news for the Steel City's bridges. In 2022, Pittsburgh made national headlines for one of its residential bridges when the Fern Hollow Bridge, better known locally as the Frick Park Bridge, collapsed and took down several passenger vehicles and a Port Authority bus. Thankfully, there were no casualties.
For more reading:
• Street Art: Knit the Bridge
• Frick Park Bridge collapse results in calls for action to prevent future "disasters"
• Bad Bridges app helps commuters avoid questionable Pittsburgh infrastructure
• Roberto Clemente Bridge to close down for repairs through 2023

2. Pittsburgh's three rivers — the Allegheny, the Monongahela, and the Ohio — meet at Point State Park in Downtown Pittsburgh. There's also a legendary hidden "fourth river" too.
For more reading:
• Okay, I have to ask: Is there really an underground river that provides the water to the fountain at the Point?
• Why there are so few riverfront restaurants in Pittsburgh
• New study tries to figure out how many Pittsburgh commuters cross rivers

3. Those coordinates? The exact location of Pittsburgh City Paper's office! We're lucky to be located in Downtown Pittsburgh, overlooking the Monongahela River. But want to travel around Pittsburgh and find other local landmarks? You've got to learn to translate Pittsburgh directions. People here like to say things like, "Turn right at the spot where something *used* to be."
For more reading:
• 10 Mnemonic Devices to Help Newcomers Navigate Pittsburgh

4. One of the first spots for many tourists is a ride on one of Pittsburgh's two inclines, which lead up to overlooks on Mount Washington. Jump aboard the Monongahela or Duquesne Incline in Station Square in the South Side, then take in the beautiful views of the city.
For more reading:
• A Kid-friendly Tour of Pittsburgh

Pittsburgh Transit Pack
We love public transit! Taking the bus is always first on our list for ways to navigate the city, but more and more alternatives to cars are popping up in Pittsburgh. Don't have your own bike? Try renting one from the many spots around town, or try out a new e-scooter. Transportation on the rivers is also an option in warmer weather, from renting kayaks and canoes to paddleboarding. And while we can't ride in them, we especially love watching the barges go by on the river from our City Paper office windows. (We often tweet pics of them on Twitter — look out for our #CPBargeWatch tag!)
For more reading:
• A Newcomers Transit Guide: How to Navigate Pittsburgh by Public Transit, Bicycle, and Car

Pittsburgh Pigeon Pack
We've declared pigeons our official City Paper mascots. While some might dismiss them as dirty birds, we think their multi-colored feathers are beautiful once you take the time to get a closer look. Sadly, we have yet to talk any carrier pigeons into delivering our weekly print product to you, but we're working on it. ;)
For more reading:
• Meet Pittsburgh’s pigeon whisperer: Kim Garrett
• Have you seen this bird? Mysterious red pigeon appears in Downtown Pittsburgh