"I thought everyone had a story to tell." 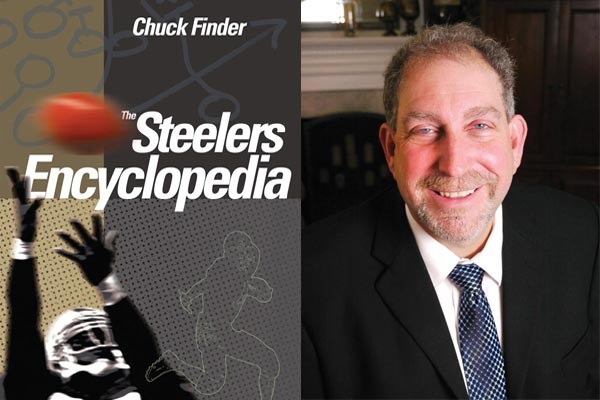 For the past 80 years, the Pittsburgh Steelers have racked up countless memorable moments. For nearly 30 of those years, working mostly as a sports writer for the Pittsburgh Post-Gazette, Chuck Finder documented many of the team's highs, lows, hits and misses.

His work, supplemented by more than six months of research, has resulted in The Steelers Encyclopedia. The book serves as a testament to one of the nation's most popular and storied professional sports franchises.

Finder was contracted to write the book for Temple University Press through what he calls "Divine Steelers Providence." Finder, now a media manager for UPMC, grew up in Washington, Pa., a family friend of former Steeler Steve Furness — a backup to Mean Joe Greene on the famed Steel Curtain defense. Before Furness' son moved back to Pittsburgh, Temple approached him about doing an encyclopedia on the legendary franchise that celebrates its 80th anniversary this year. "He said. ‘No, but I have a friend,'" Finder recalls.

Finder interviewed nearly 200 people for the book, combing through stories and eyewitness accounts to the club's history.

"I still say that in my 30-year career as a sportswriter, from the get-go, I saw athletes as people first and athletes second," Finder says.

The Steelers Encyclopedia, coming in at 336 pages, is due out Sept. 7. Finder took a timeout from his vacation to discuss the book, the Rooneys and exactly who is the Steelers' third-best quarterback of all time.

How did your career as a sportswriter influence your approach to this book?

I didn't want to write it like the Encyclopedia Britannica that we grew up with. I wanted to approach it different than a lot of other Steelers books. I thought everyone had a story to tell. … It was a lot of interviewing, a lot of research. I really tried to go back and nail things down … and amazingly, a lot of events had been forgotten. It was nice to revisit those.

Anyone familiar with the Steelers knows of legendary tales, like the Immaculate Reception. What are some forgotten stories?

I really loved Chuck Cherundolo, the oldest living Steeler and coach. It was a hell of a lot of fun to spend an afternoon in Florida with him. This was a guy who played in the war years … went into the Army, then came back and coached for a long time.

Someone told me a story of him as a coach in the early '50s, when they went from leather helmets to hard plastic helmets. Chuck held the plastic helmet up at practice and said, "Men, this is not going to be a good thing for the game of football. This is going to cause more injuries than we ever had before." If you look at it, that's kind of Nostradamus-like prediction.

The Steelers have only had three head coaches since the 1960s. What kind of legacy is Mike Tomlin building for himself, following Chuck Noll and Bill Cowher?

He's still in the process — as even Mike would say — of writing that story. Troy Polamalu says, "This guy took us to two Super Bowls in the first four years." That's certainly way ahead of Bill Cowher and Chuck Noll. He's still two behind Chuck Noll. I think that's always the ultimate measure with Steeler Nation. Tomlin has gotten out of the starting blocks a heck of a lot faster than Noll and Cowher, but he still has a way to go.

When people think of the Steelers' top quarterbacks of all time, they'll immediately mention Terry Bradshaw and Ben Roethlisberger. Who's next after those guys?

Johnny Unitas could have been … he was Steelers property for a few weeks anyways. Quarterback was kind of symbolic of the Steelers failures for so long. Bobby Layne at the end of his career — he'd be in the mix. Neil O'Donnell had a pretty good run. I know that name will cause apoplexy with Steelers fans, or they'll have to dial their doctors, but he really had a pretty good run. There are a lot of Hall of Famers whose busts are smiling because they stayed away from the Steelers from 1933 to 1968.

Art Rooney, early in the franchise's history, was known as a "lovable loser." What was the turning point for this ball club? What did "The Chief" finally do right?

Turning it over to his firstborn, Dan Rooney. I really think Dan, his whole life, was groomed to the lead the team. Where the Chief was awful  — hiring coaches and ruling with an iron fist — [those are the things] Dan did stupendously. Getting Three Rivers Stadium was Dan's baby. People talked about the blueprints on his desk, him knowing every corner. He was a micromanager, and a very astute one. Not many people knew the NFL of the '70s, '80s and '90s better than Dan Rooney. Art Rooney Jr., the Chief's son and Dan's brother, is overlooked as well. Last summer, Fox Sports named him the best talent-evaluator of all time, over Bill Walsh and Vince Lombardi.

What are your predictions for this season?

I think the stories of [the Steelers'] demise are greatly exaggerated. I really think they'll have a great season. They'll make the playoffs and surprise a lot of people.