7 waterfalls to chase in Allegheny County, and one just outside of it | Features | Pittsburgh | Pittsburgh City Paper CP photo: Jared Wickerham
Waterfall in Fall Run Park, just north of Pittsburgh
Allegheny County is known for its rivers, creeks, and streams. Sometimes, in the Pittsburgh region, even our roads turn into rivers when there is enough rain. And with fast-flowing bodies of water, come waterfalls.

More famous Western Pennsylvania waterfalls include Cucumber Falls in Ohiopyle State Park and Buttermilk Falls in Beaver Falls. And while those falls are certainly more dramatic, Allegheny County offers several waterfalls of its own, even if more modest in size, and most located in accessible parks.

Here are seven waterfalls within the county (and one just outside its border) that are worth a visit. *Warning: It has been a dry summer, so don’t expect these falls to be gushing, unless you visit directly after or during a rainstorm.

This park in Glenshaw, just north of Pittsburgh on Route 8, is home to the county’s biggest and most accessible waterfall. The fall drops about 25-30 feet down into a small pool. The whole scene is very Instagramable.

However, because the waterfall is the most picturesque, and it's just a short, simple hike from Fall Run Park’s parking lot, the trail can get incredibly crowded. Keep that in mind when visiting.

The county-run park out in Collier Township is bucolic and pleasant. At the end of Te Pee Drive, there is a parking lot, and from there, a mostly downhill trail to a beautiful 3-4 foot waterfall. Its wide mouth cascades gently into a small pool below.

The whole hike is shaded, and the waterfall can make a nice spot for picnic, or a break while listening to the splashing water. 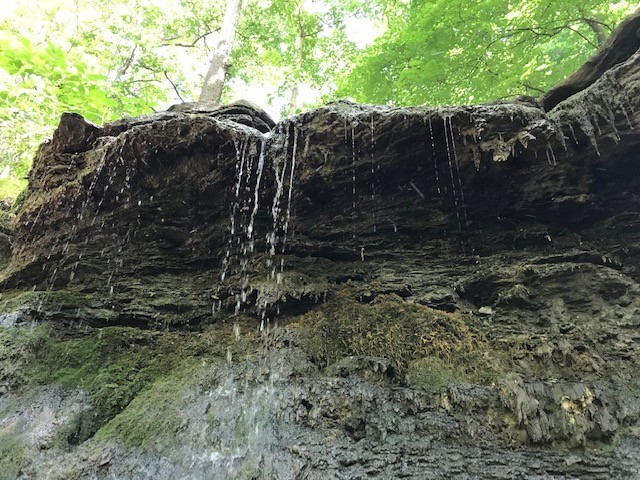 This splendid park in Upper St. Clair is actually home to multiple waterfalls, but only one that is running, even during dry periods. That fall is at the end of Mid-Falls Trail in the middle of the park. It’s about 10 feet high and falls in three different places over shale rock. 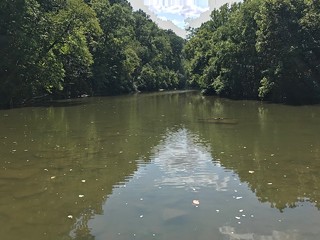 CP photo: Ryan Deto
Chartiers Creek in Boyce Mayview Park in Upper St. Clair
The easiest way to access it is from the Morton Complex off of Morton Road, then walk down Ravine Drive, crossing the Curved Bridge Trail, and up the Mid-Falls Trail, which starts immediately following the bridge.

After viewing the falls, follow the run down to Chartiers Creek for one of the best rock skipping locations in the county, and a small section of rapids. Another slightly smaller, drier waterfall sits under a foot bridge where the Morton Falls Train and Morton Ravine Trail intersect. Worth a visit during a rainy week. 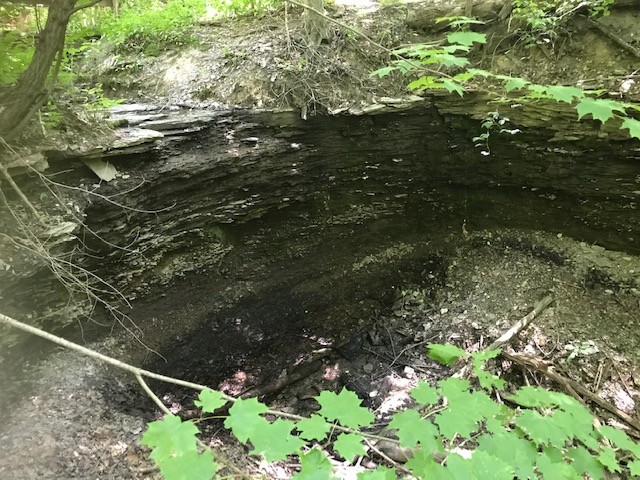 Just south of McKeesport in the Mon Valley, this quiet conservation area offers long hikes and solitude, but also a small waterfall surrounded by trees and vegetation. From the dirt parking lot located off River Ridge Road, follow the short trail that runs parallel to the pond. The waterfall is located just under a small footbridge. It’s best to view it after some rain.

On the Fall Ravine Trail, which cuts through the heart of arguably Pittsburgh's most popular city park, there is a very small waterfall to enjoy. Sure, it’s probably passed by hundreds of Frick Park visitors a day, and forgotten about. But a waterfall is a waterfall, and as someone who grew up in constantly burning California, I appreciate any waterfall I can find.

This park and waterfall will be a lot easier to find and access after the city completes its project to turn Hays Woods into the city’s next (and largest) public park. The location of this waterfall (shown above) is a bit of mystery, so consult some hiking experts before trekking.

At the end of Downing Drive in the Moon Township conservation area, lies a narrow 1.4 mile trail that runs along Meek’s Run. At one section more than half-way through the hike, the run abuts the trail and a two-foot multi-pronged waterfall emerges. Worh a visit for local hiking enthusiasts.

So this waterfall is technically located outside of Allegheny County, but just barely. In Westmoreland County’s Braddock’s Trail Park, the falls are 20 feet high, and fall down several steps. When the weather is wet, the falls spray mist across the shale rock. Braddock’s Falls are reachable from a short hike on the park’s main trail.