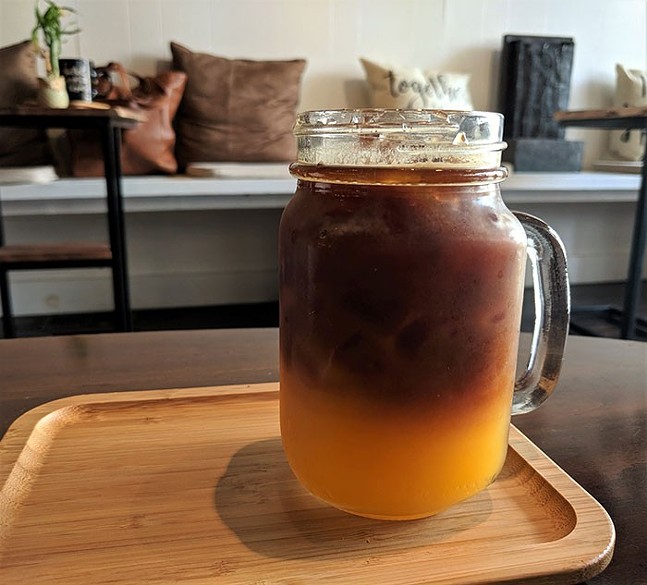 CP photo: Maggie Weaver
A shot of espresso over fresh-squeezed orange juice at Ka-Fair Coffee
It’s up for debate, but I believe coffee is a dish best served cold. The smoothness of a cold brew is unmatched, and when you add in the extra caffeine kick the beverage offers, it’s the best way to start a hot morning during a Pittsburgh summer.

Great cold brews, iced coffees, and iced lattes are everywhere in Pittsburgh. So many, in fact, that there are too many to list. But java fans in the Steel City are also fortunate enough to have several amazing cafes that are inspired by different coffee cultures from across the globe like Thailand, Ethiopia, Sweden, and even the Azores.

Here are seven great cafes where people can sample how they enjoy iced coffee in a bevy of different countries.

1806 Chislett St., Morningside
Morningside’s newest coffee shop is a love letter to Thailand. The owner, Sujitra Taimmoungpan, is from Thailand and she opened the spot to infuse some Thai flavor into an American-style cafe. One of the best examples of this is the Freshpresso, a shot of espresso over fresh-squeezed orange juice (pictured above). Taimmoungpan told City Paper last year that the orange juice smooths out the acidic espresso. On a hot day when you are looking for the espresso kick, it’s a great solution.

1100 Smallman St., Downtown
La Prima’s coffee shops offer the closest thing to an authentic Italian coffee bar in the Pittsburgh region. They have espresso-based drinks, a few other specialties, and that’s it. But La Prima does it right, and the new location on the edge of Downtown offers one of the most refreshing coffees around. A Frizz is an imported can of coffee soda that carbonates the roasty beverage. La Prima will also pour the coffee soda over ice, and add some whole milk or half-and-half on top to add some cream to your bubbles, like Italians will sometimes do to Italian sodas. Saluti.

3920 Penn Ave., Lawrenceville
The Vietnamese loved their coffee bold, rich, and sweet. Their iced coffee is no different and Ineffable has one of the better offerings around. Made by slowly dripping coarse ground dark coffee over a cup of sweetened condensed milk, and then quickly pouring it over ice to cool it off, this drink is strong, creamy, and has plenty of flavor to go around. Ineffable converted an old motorcycle shop into a cafe, so if you have time to spare, enjoy a Vietnamese iced coffee on the large patio.

5874 Forbes Ave., Squirrel Hill
Taiwan and China are best known for their love of tea, but coffee culture is growing fast in Asia. At Rose Tea Cafe in Squirrel Hill, you can have the best of both worlds with a Coffee Black Tea with Milk and tapioca pearls. Boba milk teas, those served cold with chewy tapioca pearls at the bottom, are becoming more and more popular in Pittsburgh. At Taiwanese-inspired Rose Tea Cafe, enjoy a boba tea with a coffee twist.

4715 Liberty Ave., Bloomfield
The Azores are an island chain in the middle of the Atlantic Ocean, owned by Portugal. The cuisine is a mix of Portuguese, Carribean, and African. They also love coffee. Stop in the Bloomfield shop and try a frio cold brew, which is cold brew with a thick layer of foam and whipped cream on top. It's best drank without a lid, since each sip comes with a rich dollop of cream, followed by a refreshing gulp of ice cold coffee. Azorean Cafe also offers some retail items to purchase from Portugal and the Azores.

2002 Smallman St., Strip District
This cutting-edge beverage invented in Sweden is taking the coffee world by storm. Coffee shops across the world are offering a shot of espresso floated on top of tonic water as a refreshing and unique tasting beverage. De Fer Roastery & Cafe in the Strip District adds some lemon juice and vanilla-rose syrup to theirs for a cocktail-like coffee beverage. Very hip.

750 Fifth Ave., New Kensington
Ethiopia has elaborate coffee ceremonies which involve many very old traditions, and a special coffee pot and small cups. However, this ceremony, which is offered at Kafa Buna in New Kensington, is really mostly for hot coffee and it can last hours, since it involves roasting, brewing, and drinking. But Kafa Buna also offers some Ethiopian iced coffee to go. Beans from Ethiopia, one of the first cultures in the world to embrace coffee, are floral and fruity and make a unique cold brew experience.