CP photo: Jared Wickerham
Salmon tartare is shown at a Fet-Fisk pop-up dinner at Pear and the Pickle in Troy Hill on Mon., Jan. 20, 2020

Nik Forsberg and Sarah LaPonte know that Nordic food, to most eaters, isn’t the most appealing cuisine. But the duo’s “loosely Nordic” pop-up Fet Fisk has been consistently filled to capacity, even the most skeptical diners developing a “Fet Fisk addiction.”

Roger Li, the chef and owner of Ki Ramen, Ki Pollo, and Umami, has garnered a massive following for his Cantonese Dim Sum pop-up, which is now heading into its third chapter. His second event had diners chanting, “Pittsburgh wants dim sum.”

Pop-ups, like Fet Fisk and Dim Sum, have become major players in Pittsburgh’s food scene. These one-night-only eateries, raw and flawed, are chances for chefs to do something different.

Li has been using the pop-up model since 2015, with sound logic to back his methods: Why spend time, effort, and resources building a new concept that the city might reject? He relies on pop-ups to gauge the response to new ideas and cuisines, starting with Umami, followed by Ki Pollo, and now with his latest concept. 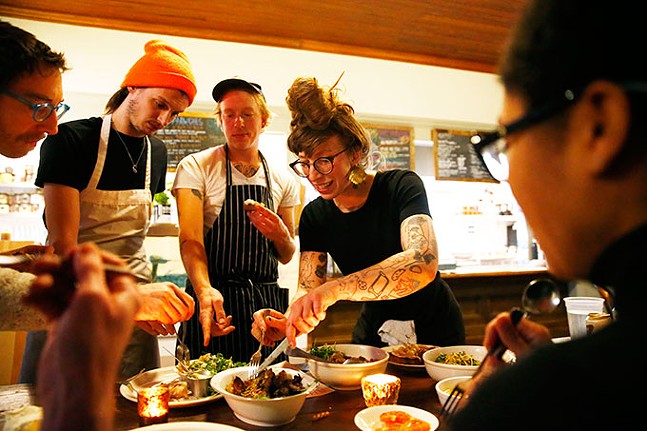 CP photo: Jared Wickerham
Co-owners of the Fet-Fisk pop-up dinners, Sarah LaPonte and Nik Forsberg, taste test food with their staff prior to the start of their pop-up dinner at Pear and the Pickle in Troy Hill.

He comes to the pop-up scene with a slight advantage, already well known in Pittsburgh for great food — eaters here trust Li.

Forsberg and LaPonte, on the other hand, come from a completely different position. They are the first to admit that “new Nordic” cuisine is an unusual pick for a restaurant, let alone a pop-up. The test kitchen element was critical to their success; based on the stigma of Nordic cuisine, a brick-and-mortar Fet Fisk may have failed, but this approach has allowed Pittsburghers to warm up gradually to their seafood-driven menu.

To set themselves apart, Forsberg is taking a modern, hyperlocal perspective on Nordic food, following in the footsteps of chefs like Magnus Nilsson. He’s bringing in vegetables from Tiny Seed Farm, oysters from a small, family-owned farm in Washington, and bread from a local, small-batch purveyor.

Before opening his now-beloved Lawrenceville izakaya, Li was in a similar place as Fet Fisk: no money for a brick and mortar but a strong desire to do something new. He held a series of six pop-ups, the first at Grapperia. Partnering with other local restaurants turned out to be a win-win. One Umami pop-up could bring in upwards of 300 people, generating extra revenue in bar sales for the “closed” restaurant while giving Li the space to experiment.

Today, even with three restaurants at his disposal, Li returns to his original approach. The third Dim Sum pop-up will be held at DiAnoia’s Eatery in the Strip District, and most likely, he will do most of the prep work from home.

Fet Fisk has been everywhere. In the past year, Forsberg and LaPonte have bounced from Penn Hills to Braddock to Troy Hill. Their first-ever pop-up was in the blank space that now holds Pigeon Bagels. Their erratic movement has brought with it a fun sense of secrecy. (At one dinner, LaPonte notes that diners were given a hand drawn map to find the location.)

But this “secrecy” also means that Forsberg and LaPonte have had to drag burners, pans, trays, and even tables between locations. As they head into their second year of pop-ups, the duo is thankful to have a secured tenure — complete with a small storage area — at Pear and the Pickle in Troy Hill.

In Swedish, fet fisk translates to greasy or oily fish, and the Nordic duo’s unique approach to a pop-up reflects this. They’re not, per se, “polished.” They’re thrifty.

The duo has “cobbled together a lot of their wares,” as LaPonte puts it, and that gives their pop-up a totally different feel than Li’s Dim Sum. They’re including you, the eater, as part of their creative process. Li comes in fully grown and looking for feedback; Fet Fisk befriends you and asks you to grow with it.

Both new pop-ups are putting out fantastic food, but their pop-ups would get nowhere without promotion. There are no Yelp reviews and no storefront, nothing for an eater to base their opinion on.

Li uses a guerilla-style marketing technique, proven successful by the two-block long line at his second Dim Sum installment. (His third dinner sold out in 45 seconds.) He relies on unexpected announcements, food photos, and constant updates. He’s focused on engagement — a vital piece of a pop-up — to keep social media users engaged in between dinners. 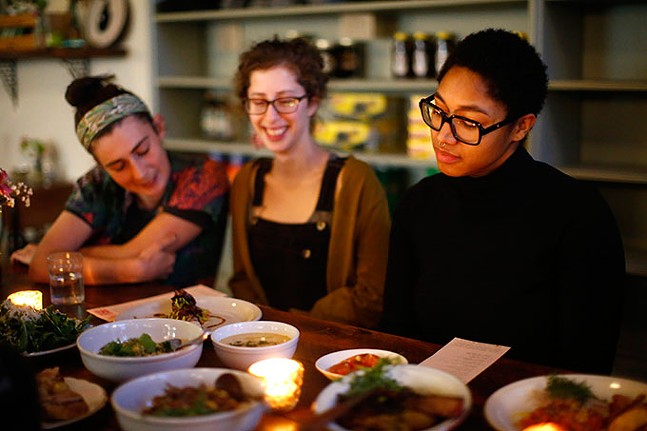 Forsberg runs the Fet Fisk account, and it is the opposite of Li’s in almost every way. Forsberg describes it as a “free for all;” there’s no apparent reason for his posts. (He describes the vibe as  “squirrel-y and pirate-y”). One day it’s a wall of text, telling the story of a fictional restaurant Burger Queen and a love triangle, the next it’s documenting a trip to the “local Swedish embassy,” aka Ikea.

But Forsberg’s strategy, or lack thereof, is enticing. You never know what’s next.  It’s also a clear representation of the duo’s vision for Fet Fisk: a place where the rewarding parts of food service come together — great food, great atmosphere, and great people — like a “parallel universe” of the food industry.

Both Fet Fisk and Dim Sum have been proven successful, but that is not to say a pop-up doesn’t come without risk. LaPonte laughs looking back on her hesitation heading into their first pop-up, unsure that her $400 investment would ever see a return.

Li, Forsberg, and LaPonte took a gamble with their pop-ups, attempting to break into a well-established food scene like Pittsburgh’s, one that’s ridden with long-standing, legacy-driven restaurants. And for both pop-ups, this gamble paid off. Pittsburgh presented them with a unique opportunity: There was room to grow, and a crop of eaters demanding it.