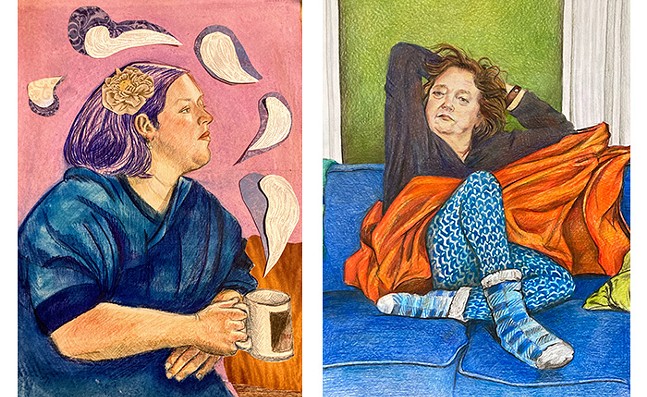 Portraits of Suzanne Werder and Kirsten Ervin from Drawn Together
It’s been said that once women reach a certain age, they become invisible. Not just to the male gaze, but to peers, to bosses, to people walking down the street. Middle-aged women are stereotypically the mothers, the caretakers, the people behind the lens, not the ones in front of it. But a new art exhibition by two Pittsburgh women is centering the artists’ likenesses, ensuring that they — and every freckle, roll, and laugh line that comes with aging — are seen.

Kirsten Ervin, 54, and Suzanne Werder, 44, spent the entirety of January 2022 taking turns modeling as the other created artwork from her poses. About half of the portraits were created during live sessions in Ervin’s home in Lawrenceville, the rest from selfies the two of them texted each other at random, spontaneous moments. Each artist will present 31 of their portraits at Drawn Together: A Coming of Middle Age Story in 62 Portraits, on view from April 2-24 at Braddock’s UnSmoke Systems Artspace.

“You know, women my size are often not represented in art or anywhere,” says Werder. “So this is a neat opportunity to be seen and to see, and to reveal the other person's beauty to the world as well.”

The pair first met years ago “drawing naked people” during a figure drawing class. “We were kind of the bad kids and we would end up making the model laugh,” says Werder. “And got in trouble a lot,” Ervin finishes her sentence. The silliness shared between the two women continues even now, both often cracking each other up, Werder moving her hands in flamboyant gestures.

While they say the other participants in the nude figure drawing classes where they first met were “wonderful,” the classes were also very male-dominated, and, over time, Ervin says the people they painted went from “all types of bodies and sizes” to thinner women in their 20s being chosen as the models.

CP Photo: Lisa Cunningham
Drawn Together artists Suzanne Werder and Kirsten Ervin
The male gaze has purposely been removed from the portraits in Drawn Together, and the women say they agreed ahead of time that they would not set out to make the artwork flattering, but true to themselves. Ervin, drawn impeccably with Werder’s colored pencils, lounges on blankets and pillows as she gazes off into the distance, her oversized sweater folded in thick layers that are illustrated with such detail, one could mistake the image for a photograph at a distance. In Werder, Ervin captures her plus-sized beauty with brilliant blues and purples, incorporating mixed-media pieces into her portraits. In one, Werder stretches her arms out across the back of a couch, her relaxed body drawn to fill the frame, as if in an invitation to come closer.

There is also plenty of joy, found everywhere from ridiculous facial expressions to “bed head,” as seen in a set of portraits done from bedroom selfies, sent to each other first thing in the morning.

“Joy is infused in everything whenever Kirsten and I get together. Just the joy bubbles over, and this project is also about that,” says Werder. “And joy often gets a bad rap and it is seen as being frivolous. We see it as being necessary. We see it as a weapon against, you know, the angst of life. And boy, I sure needed it.”

While the two collaborated on several other projects years prior, Ervin came up with the idea for Drawn Together as a way to help Werder get back to making art after the pandemic hit her hard. They say they both deal with depression, and artwork is a way that helps.

“It was also really cool being seen too, being on the other side of the drawing board,” says Werder. “And it's also cool being represented in art. People our age, you know, women our age.”

It’s a two-way street, Ervin says, for middle-aged and younger women to recognize each other, but in the art world, she says older women, and older folks in general, are continuing to get ignored.

“I've talked and I've heard it from women of color, I've heard it from white women. I've heard it also from men too, though,” Ervin says. “I mean, I saw with my parents, who were both professional artists, when my dad hit his 60s, he was basically shoved out of his job because he was too old and then really, really treated like he didn't have it anymore.”

Ervin says the art world has an “obsession with emerging artists,” which she says is being defined as only pertaining to those who are young.

“And that's complete bullshit, right?” she says. “I think the wonderful thing is that in the last few years, there has been a welcoming of more visibility for Black and Brown artists, but that needs to expand further. If you think about intersectionality, that also includes age, it also includes income level, it also includes educational level.”

Ervin, who, like Werder, is white, says she has heard from many folks in private, both white and Black, about ageism in the art scene. “They won't talk about it publicly, that they felt like, 'I've stopped making art because I only see it as a thing for the young, no one’s interested in me anymore.'”

“I also once taught a self-portrait class and everybody who signed up for my classes was a middle-aged woman,” Werder adds, “and I unexpectedly had to do a lot of therapy with my students before they could even jump into things because they're not the ‘hot 20 year olds’ that our society peddles as the only form of beauty, which is not true.”

Werder and Ervin are both self-taught, despite both coming from “intense art families,” and say this project helped them grow, both in terms of their artwork and their friendship.

“Just by being ourselves, this is feminist art,” says Werder.

This is reflected in how the women are portrayed at ease in the portraits, even more so in their live drawings than in the ones taken from photographs. When the women were able to draw each other in person, they say they laughed and talked together through the process.