A dramedy about the possibility of death, with lots of witty dialogue that occasionally permits a few moments of truth 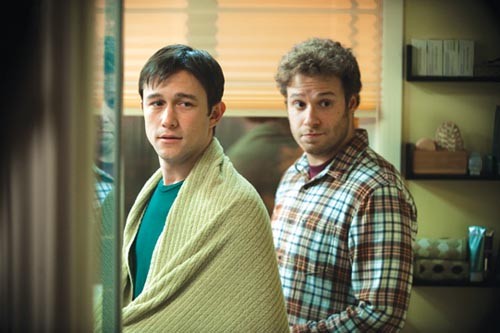 About an hour into 50/50, the story of a 27-year-old man (Joseph Gordon-Levitt) fighting cancer, he and two fellow patients sit around a backyard, smoking marijuana to relieve their nausea, and just riffing on stuff. The director, Jonathan Levine, shoots the conversation with quick cuts and in close-ups that look at times like he used a telephoto lens, as if to keep us from intruding on a rare moment of tranquil intimacy. 50/50 is a dramedy about the possibility of death, with lots of witty dialogue that occasionally permits a few moments of truth, lest we forget what's at stake. But Levine and his neophyte screenwriter, Will Reiser, tell most of it in the style of episodic television, where otherwise educated adults act like children to keep from requiring the audience to think too hard or feel too much. Gordon-Levitt can be a mannered actor, but he's especially good at this type of introspection. Bryce Dallas Howard is his puerile girlfriend, Anjelica Huston his anxious mother and Seth Rogen his man-child best friend. It has charm, but almost every scene is a warmed-over version of something familiar, leading me to conclude that clichés are a dish best served cold. Starts Fri., Sept. 30.