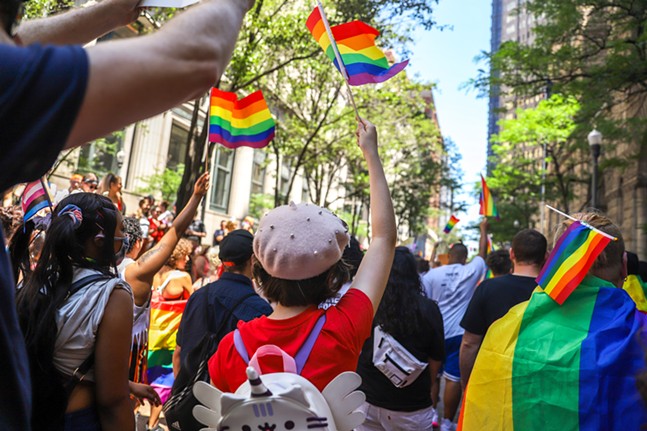 CP Photo: Kaycee Orwig
Pride march in Downtown Pittsburgh
To commemorate 50 years of queer media in Pennsylvania, the Center for Media Innovation at Point Park University will host an event on Mon., Oct. 11, which coincides with National Coming Out Day.


"50 Years of Coming Out, a celebration of queer media in Pennsylvania" will feature a gallery exhibit of Pittsburgh queer media over the last five decades and a panel discussion with LGBTQ journalists, bloggers, and communicators representing publications across the commonwealth.

Director of the Center for Media Innovation Andrew Conte says he hopes the exhibit and panel will help set the stage for meaningful and thoughtful conversation about the progress made in a half-century and how much more aware and supportive society has become towards queer issues.

People can attend either in person at the center’s location or virtually on the Center for Media Innovation’s Facebook page.

To help with the cost of the event, the CMI recommends attendees donate $15 for in-person visits and $5 for people watching online. The event will also include an exhibit detailing queer history in the region, and the many publications that have served Pittsburgh’s LGBTQ community over the years.

Co-creator of QBurgh, Jeff Freedman, describes the exhibit as a well-documented history for the LGBTQ community in Pennsylvania.

“This was our tie to the community," said Freedman in a statement about the LGBTQ publications. “We lived in a very straight world. These came out once a month and were like heaven to us. They were a moment in time where we could connect with our community and see people and read about people like us. Then you put it away and went back into the world.”

The panel, Future for Queer Media, will start at 7 p.m. and will feature LGBTQ journalists, bloggers, and panelists representing publications from across the state discussing the current state of queer media in Pennsylvania and expectations for the future.

Panelists for the discussion include: