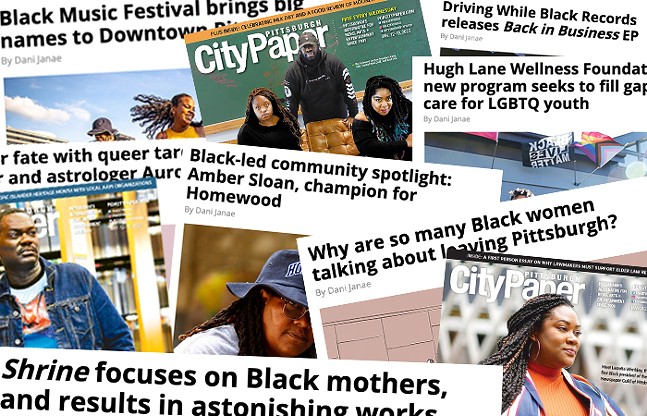 I'm leaving CP because I'm moving to a new state at the end of the month. I've lived in Pennsylvania my whole life, so this move is equal parts scary and exciting. Last year, I wrote a piece interviewing Black women who are leaving or have left Pittsburgh because of reasons mostly stemming from racial injustice. It's not lost on me that the Black woman who wrote that column is now leaving, too.

Having been a Pittsburgher my whole life, there are a lot of things I will miss about living here. And, a few that I won't. Here's a brief list of five of each.

Things I Will Miss:

1. The Black Queer Community
I used to go out and hang out a lot more before the pandemic hit, but Pittsburgh has a small but mighty Black queer community that I have been able to write about for the past few months. It's a community that is so joyful and creative, despite being at the intersection of identities that are often targeted in the city. I love that I've been able to be a small part of this community through writing about it and living in it for some time.

2. The Literary Community
When you think of Pittsburgh, you don't often think of literature. But many literary giants from the past and present have lived or are from here. I'll miss writers like Toi Derricotte, Brian Broome, Deesha Philyaw, and Yona Harvey. Of course, I'll be able to read their voices whenever, but I'll miss seeing them read or at a random event.

3. The East End
I grew up in Garfield and have lived in Pittsburgh's East End for most of my adult life. In my friend group, I was known for hopping around housing a lot, but I've always stuck close to the side of town I know the best. In my opinion, the East End has the most unique nightlife scene, the coolest coffee shops, and the best bookstores, all of it a walk or a quick bus ride away from me.

The East End, especially Garfield and East Liberty, have changed so much since I was a kid growing up in the '90s. The stores where I got my school clothes are now gone. Apartment buildings I passed on my commute to school or work, now replaced with grocery giants. It's sad to see how the neighborhood has changed, especially the displacement of Black residents, but I'll miss being a part of this side of town.

4. The Vegan Restaurants
I went vegan in college 10 years ago, when things on the market were vastly different. I attended college in Meadville, Pa., so when I was home in Pittsburgh, the best places to get vegan-friendly eats were usually Indian or Chinese restaurants. These restaurants still cater to vegans, but now there are also other, newer places that have all-vegan menus. The donuts at Onion Maiden are my favorite. The seitan shwarma from B52, the cakes from Butterwood. It was pretty easy to be vegan here, and I was always appreciative of non-vegan restaurants that clearly labeled their vegan fare.

5. The Music Scene
At CP, I got to write a lot about local musicians. I'll miss interviewing and championing local musicians who are so extremely talented and cool. Everyone from F3ralcat to Flower Crown, and musicians who I'd only discovered through my work here, like Side Sleeper, everyone at Driving While Black Records, or Gaadge. There are so many talented acts performing in this city, and I hope people continue to support them.

Things I Will Not Miss:

1. The Bridges
I know, I know. I've never been able to cross a bridge in this city without imagining it collapsing under me, so when a bridge actually did collapse, I thought my nightmares had come true. I won't miss the crumbling infrastructure, the potholes that almost knock you off your bike, or any of that.

2. The Snow
I have always hated snow. There was once a three-year stretch where I slipped on the ice frequently throughout the winters. I started tallying the years where I didn't slip, and I've been holding strong for around five years now. I'm just not made for the cold I guess.

3. The Gray
Pittsburgh is just a gray city. It is what it is. I won't miss it, though.

4. The Drivers
Having had many near misses as a pedestrian, I won't miss this city's notorious drivers. I myself have never been a driver in the city, so I am kind of sad I never got the chance to make a Pittsburgh left, but maybe I'll come back and do the honors.

5. Racial Inequity
As a journalist, I've heard and reported on many stories of racial inequity in Pittsburgh. It would be hard to write a goodbye column without mentioning this. It was frustrating watching Pittsburgh get awarded "most livable" by random studies while Black people I knew were forced out, or unable to afford living here as the cost of living got more expensive.

The truth is there is no idyllic town where racism doesn't exist. I'm sure I'll encounter it wherever I go. But living with it here while people outside touted it as this great place to live felt like being gaslighted.

All in all, I'm sure the next couple of weeks will be very emotional as I say goodbye to my first home and all my friends here. Thanks to this city for raising me, despite its faults, and for making me the person I am today. I know I wouldn't be me without this city, and I feel gratitude along with my wish for a better Pittsburgh.Follow Dani Janae on Instagram @bell.biv.dahoe and online at figwidow.com.