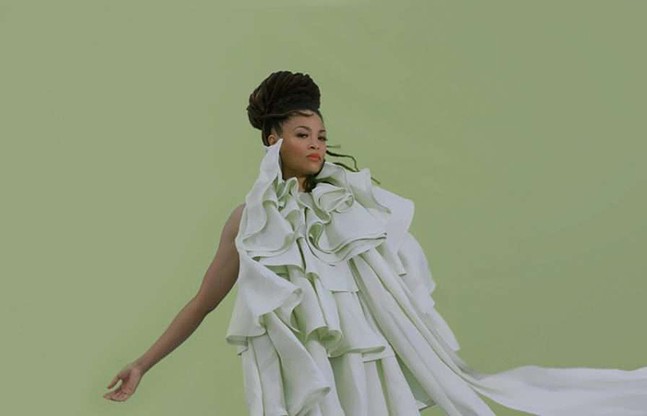 Photo: Renata Raksha
Valerie June
Over the years, Tennessee singer/songwriter Valerie June has risen from the stages of the Three Rivers Arts Festival to recently performing on The Kelly Clarkson Show. Her distinctive vocal styling has drawn some interesting comparisons and descriptions — one Pittsburgh City Paper writer called her an "Americana-Rock with folk and blues/roots performer," while another said she possesses a "quality similar to that of Joanna Newsom, which is to simultaneously sound like a child and an old lady."

Valerie June released her latest full-length album The Moon and Stars: Prescriptions for Dreamers in January, and has embarked on tour promoting the new work. Before she performs on May 6 at the Carnegie of Homestead Music Hall, Valerie June answered a few questions from the City Paper.

1. When did you first realize you had a talent for singing?
I think just, like, when I was little, and loving to sing was more the thing than thinking to myself, ‘Oh, I'm talented.’ I just loved the act of singing. Because the idea of talent was something I compared to the radio and I never sounded like that. So I didn't think that about myself. I just thought I love to sing. Everyone in my family can sing, we have a singing family. It's like The Sound of Music.

2. You have a very unique and beautiful voice, did you ever feel discouraged about not sounding like other singers?
Yeah, for sure. Pretty much for the first decade of my career, I felt very discouraged, but I just learned how to use it as fuel for what I wanted to do. And like I said, because I love singing, I wasn’t gonna do anything else. I just love it. I like doing things that I'm passionate about and that I love regardless of what the world thinks.

I think everybody can sing. Yeah, I do. Just the freedom of singing and what it releases for you when you get in your car and you sing as loud as you can. When you're singing along with something you enjoy, you can't even describe the freedom you feel when you're singing. And so I think every voice has a range and a way of being able to express itself. And when you think about this idea of voices being only these beautiful voices, then we're missing so much, you know, because I like dark voices. I like beautiful voices and I like pitchy voices. I like all kinds of voices that have emotion. So that's kind of what I'm looking for when I listen to a singer, what does it make me feel?

3. The Moon and Stars has a very grand, sweeping sound to it. How did you achieve that?
Well, with the help of a whole lot of awesome people. Jack Splash was the main producer on it, and he is just a really, really creative being. His energy is full of creativity. We talked about how he loves, not just music, but art and fashion and all kinds of stuff, even nature, and so we basically took our likes for all of those different things, from art to music to fashion to nature, and made a record with it.

And the other gentleman who participated — his name is Ben Rice, and I've known him for many years in Brooklyn. And it was just really just a very natural thing to work with Ben on the song “Colors” because it's like a little bit of my Tennessee, and DeGraw Studios in Brooklyn. That's like my little home when I'm in Brooklyn. So I went to Ben and we just hit play and recorded the songs like “Colors.” So it was Ben and Jack and all of these beautiful musicians, ones that I knew personally and I've toured with for a very long time, and Jack's musicians that he works with in L.A. and Miami. There were people from Memphis. We layered and layered sounds, and then we have the ultimate rock stars on the very end of the record, and that is birds. They are singing at the end and they’re from my home in Tennessee and I recorded that bird song during the pandemic.

4. What is it like working with your band?
Easy. Very easy, because we have known each other for so long. These musicians that I've worked with for I guess, maybe seven years. And so it was just like, “Hey, let’s go in and record some songs and have fun!” And it really was. It was exactly that, it was fun. It wasn't stressful. And I needed a record that was playful, that was adventurous, and not stressful. Because recording can be very scary. I really love the fact that there wasn't any pressure to do anything on this record but have a great time.

5. As far as lyricism goes, do you write songs from the heart and hope people connect with them, or do you write with your audience in mind?
Just from the heart. I don't think about people when I'm writing songs, and I don't think about myself. I actually go somewhere in my mind, they transport me and that's where I am. And when I get back, then that's when I think about, “What is this song and what does this song mean?” It's like their gifts, you know? And they take you somewhere.

So I was just planting some flowers — spring flowers because today is National Garden Day — and I was planting them and whenever you do something like that, everything else in the world just stops. That is what you're doing. You are planting a beautiful flower and you're not thinking about all this other stuff you have to do after that or what you did before that, planting a beautiful flower is all you're doing. And that's what writing songs is like for me, and that's my favorite part about making music. Because every other part of it is hard, from touring to recording, working with others, or not working with others. All of it is hard, but writing songs? I do it in my sleep. I do it in the bathtub. In fact, I do it when I'm gardening. I don't think about it. I just do it. They come and I write them.
Valerie June: The Moon & Stars Tour. 8 p.m. Doors at 7 p.m. Fri., May 6. Carnegie of Homestead Music Hall. 510 E. Tenth Ave., Munhall. $29.75-54.75. librarymusichall.com