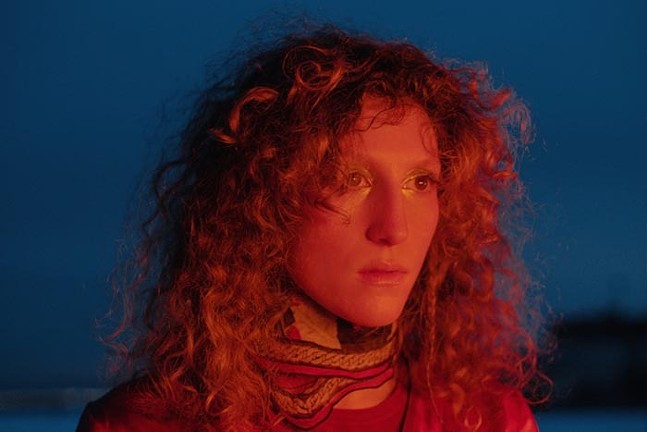 Photo: Tonje Thilesen
Squirrel Flower
Musician Ella Williams performs under the name Squirrel Flower, making emotionally charged music about life's big questions, from the problems everyone faces as they grow up to climate change. William's voice is smoky and powerful. As a multi-instrumentalist and a songwriter, the experience of listening to her music is intimate and intense.

Squirrel Flower is on tour across the U.S. this winter, and will be stopping in Pittsburgh on Mon., Feb. 7 at Club Cafe. She will be joined by musical artist Mia Joy. Pittsburgh City Paper got the chance to ask Squirrel Flower five questions ahead of her show.

1. Will this be your first time in Pittsburgh?
Yeah, it actually is my first time ever in Pittsburgh. Somehow, I was supposed to tour there in March of 2020, but obviously that ended up not happening. I'm really excited. It's always really fun to see a new place, and I feel like Pittsburgh is one of those overlooked, underrated cities. I've always gotten the sense that it just has a really sick music and art scene. I'm excited to stop through for sure.

2. Did you always know you were able to sing? What has it been like honing your voice and your craft since you started music professionally?
I've always been a singer. My dad has been a professional bass player for pretty much his whole life, like, since he was 16. He got a scholarship to Berkeley College of Music and just moved out there by himself and started playing music, and has done that for several decades. So I grew up around that and was part of an ensemble and taught myself how to play various instruments that were lying around the house. We had family jam sessions and stuff like that.

But since I started doing it professionally, which I would say was when I started [DIY] touring when I was 18, and then when I graduated from college, I sort of decided to take the next step and try and have it be more full-time. Not like a job, I just don't like thinking of it as a job. But I wanted to really have the goal of being able to make music, so I can have that be the main thing I do and not have to have another job.

I've spent the past four years working in food service, aside from [the COVID pandemic] when I was getting unemployment and government checks, which was sick because I could just focus on music. Since I started professionally, or more intentionally, spending all of my time doing it with specific goals in mind, and on a record label and with a manager and all of that, it's a constant state of evolution. I think because even though I do have a specific sound and the project is a solo project and it's very much mine and I don't think it's changed all that much from album to album, there have been subtle changes. But it's not like I was making folk and now I'm making techno.

So it is in a constant state of evolution and I try to always be self critical, not overly critical. But yeah, just self aware and constantly looking at what I'm doing and finding new ways to do it.

3. I noticed while listening to Planet (i) that you also do all the writing as far as lyrics go. What do you do to get yourself in the headspace to write a song?
It's really hard. For as long as I've been writing songs, the way I write them is not always intentional. It's just sort of how it has always happened. As long as I've been a songwriter, I've gone through long periods of writer's block and I take a step back from actively producing songs. I think incubation is really important. So my process is surrounded by periods of not writing, but still playing music and still improvising and playing guitar and using my voice, but just not sitting down to write a song. But after a few months or even like a year, I feel a sense of inspiration and sit down and write a whole album sometimes.

It comes when it comes and I try to nurture my creative process while I'm not actively writing. I try to harness it into a voice to memo or onto paper as soon as I can. When I do feel like it's time to write, I've tried different methods. I've tried being more regimented about it and sitting down every day at like 9 a.m. and trying to write songs for hours. And I can bang out some songs like that, but they never feel quite there and it feels more like a chore than an art form. I really think a huge part of my process is what's happening when I'm not actively creating.

4. There is, of course, a lot of nature imagery in the album, but also a focus on water. What is your relationship to water?
It's a fraught one. Since I was young, I would go to swimming lessons at the YMCA and just refuse to go in, then refuse to put my head under the water because I wasn't scared of drowning, but there was something about the power of being engulfed by water. That really scared me as a kid. To this day, I'm pretty afraid of deep water and huge tidal waves. Also, water coming from the sky as well and huge, powerful thunderstorms. I’ve had so many intense nightmares throughout my life about it. I kind of thought it was time to face my fears a little bit through the songs. I didn't go into it intentionally facing my fears through writing the songs.

But after I wrote a couple songs, I realized that was kind of what the songs were telling me about the theme that was unfolding. I was thinking more about climate change and the inevitability of it. Every person will be face-to-face with a, a massive disaster of some sort and that is the scariest thing ever to think about. I’m just trying to stare it down and not be destroyed by the fear of it.

5. I’m wondering if you go into creating with a certain goal, or do you make music for the pure joy of it? Maybe getting joy out of it is a goal in itself?
I think it fluctuates. Now that I have more of an audience than I've ever had, it's hard to keep in mind. Just the idea of making music for the joy of it, that's something that I struggle with. It’s hard to go into creating something and not be thinking about people, listening to it and experiencing it and what they're going to think and how they're gonna process it. Whenever I feel that way, I kind of get out of that by playing music with my friends and my siblings and just going crazy and having, like, insane jam sessions. I like playing music that is nothing like the music I make for Squirrel Flower. Or diving into a different art practice, like painting or drawing, which I really love to do. I've found ways to bring myself back to the mindset of making art just to make art because it's joyful and like an amazing thing to do as a human being. It’s a way to celebrate life.
Squirrel Flower. Doors at 6:30 p.m. Show at 8 p.m. Mon., Feb. 7. Club Cafe. 56-58 S. 12th St., South Side. $21 and over. $13. opusoneproductions.com