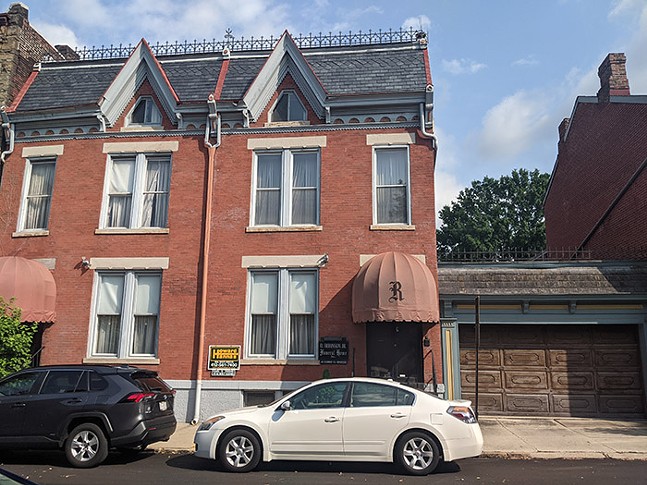 CP Photo: Lisa Cunningham
The former O. Robinson Jr. Funeral Home on North Taylor Avenue, currently for sale in the Mexican War Streets in Pittsburgh's North Side
It’s not every day that a funeral home is put on the market, but the former mortuary at 614 N. Taylor Ave. on the North Side has been on the market for 110 days. The only catch? No funeral home businesses are allowed.

The two Mexican War Streets side-by-side townhouses are being sold together, with the first floor and basement set up as a business and two apartments on the second and third floors. Each apartment has two bedrooms, a full bath, and a living room and kitchen combo, and the property is advertised as offering ample storage space and a five-car garage at the rear of the space.

While the listing mentions the potential of converting the property back into two large single-family homes or into a single apartment building, it also specifically says the sales agreement requires "no funeral home business allowed," so Pittsburgh City Paper has five other suggestions for interested buyers.

Step aside converted church breweries, a new challenger has appeared. Despite the seller’s deed restriction, the former funeral home still has commercial zoning, which would allow a new owner to convert the property into a themed brewpub with plenty of room for a bar and table seating, pool tables, beer casks in the form of caskets, and plenty of punny menu items like cream-atorium ale.

The North Side already boasts several bookstores such as City Books and City of Asylum Bookstore at Alphabet City, but for readers in search of tomes about people of Pittsburgh's past, a former funeral home could be a perfect location for a new, niche bookstore. While it’s unclear what the Venn diagram of book lovers and people who would like to spend time in funeral homes looks like, a bookstore with postmortem intrigue could become a new Pittsburgh destination for adventurous readers of the city's dearly departed. The first floor has plenty of room for bookshelves, display tables, and reading nooks — hopefully complete with chairs so comfortable you could die — and the basement would be perfect for book storage.

If there’s one thing children’s horror media teaches viewers, it’s that the magic shop has something weird going on behind the curtain. As a former funeral home, this location offers any magician who might set up shop the perfect backstory to keep mysterious until the precocious protagonists are about to square off against whatever horror antagonist is ambling towards them this time. The location would also allow North Side residents interested in dipping their hands in magic tricks easier access to supplies without having to cross a river, and for their first trick, they could make the clutter in the listings photos disappear.

While worms are known for eating dead or decaying organic matter, they are not part of the funeral business. To keep the property true to its funeral home roots, however, one could convert it into a worm farm and composting site. Groups such as Shadyside Worms and Worm Return already offer composting and worm services around the city, but to increase composting accessibility to more Pittsburghers, reduce food waste, and create more jobs for hard working worms, a former funeral home worm farm might be the way to go. Just maybe include a disclaimer that no human bodies were decomposed in the process of farming the worms.

Assuming the escape room fad isn’t over quite yet, a funeral home-themed escape room would be perfect in a former funeral home. You’d barely have to redecorate, and the multiple rooms on the first floor and basement would allow a variety of puzzle rooms ranked on difficulty and macabre plots. As a reward, successful escapees could win leftover funeral cookies wrapped in aluminum foil.
614 N. Taylor Ave., North Side. $599,900.
howardhanna.com/Property/Detail/614-North-Taylor-Ave-Central-North-Side-PA-15212/Westpenn/1495685