4.48 Psychosis at Off the Wall 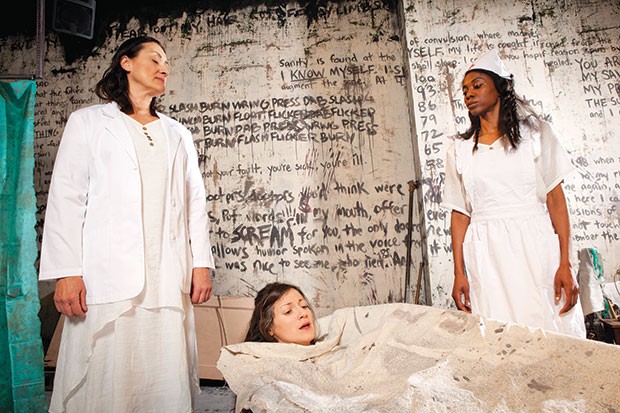 Photo courtesy of Heather Mull
From left: Tammy Tsai, Erika Cuenca and Siovhan Christensen in 4.48 Psychosis, at Off the Wall

continues through May 6. Carnegie Stage, 25 W. Main St., Carnegie. $25-40. 724-873-3576 or insideoffthewall.com
Nobody can accuse anyone connected with Off the Wall Productions’ latest show, Sarah Kane’s 4.48 Psychosis, of taking the easy path. The play was first performed in 2000, a year-and-a-half after Kane’s death by suicide, and is — by design — one of the most unpleasant evenings you’re likely to spend in a theater.

British playwright Kane suffered from severe clinical depression and had been institutionalized on more than one occasion. She finished the play shortly before she hung herself, and the feeling you get watching the work is that of being trapped in a box which people on the outside are kicking relentlessly. As Michael Billington of London’s The Guardian wrote in his review of the original production: “How on earth do you award aesthetic points to a suicide note?”

It’s something of a stretch to call 4.48 Psychosis a play; Kane doesn’t give stage directions, a cast list or a location. She’s written 24 sections of mostly impregnable language: disconnected, murderous and ceaselessly ugly. If you put a gun to my head (and after 65 intermissionless minutes I was sorta/kinda hoping someone might), I’d say it’s about a person in a mental institution, and we’re locked inside her brain with all the voices she hears.

Because Kane didn’t offer much in the way of theater, it’s left to specific productions to supply their own. At Off the Wall, director Robyne Parrish has divided up the “script” for three actresses: Erika Cuenca, Tammy Tsai and Siovhan Christensen. I don’t have the words to precisely express my admiration for them — how they manage to get through it is astounding. These four bring such incredible intensity and seriousness of purpose that, for a few minutes anyway, you don’t feel like you’re gnawing a limb out of a bear trap.

There’s also movement provided by Moriah Ella Mason and original music from Reni Monteverdi. It’s all wonderfully expressive, but I’m not sure how much it helps, because the movement is mostly painful writhing, and the music is aggressively unsettling. And Adrienne Fischer has designed a set which is, like the play, purposefully repugnant.

Yet having dumped on the show, I still can’t fault Off the Wall or the artists behind it. Kane’s command of her language is evident in every second of the work. Theater shouldn’t be all about singing cats and slamming-door farces; life is, or can be, a ghastly, destructive, nauseatingly painful experience, and Kane places that sorrow, rage, hurt and hate squarely on stage with force and talent.

But just because Off the Wall has every right and reason to stage it, that doesn’t necessarily mean people have to sit through it. Whether you want to see 4.48 Psychosis is entirely up to you. Me personally? I’m already more than aware of how dreadful life is, and that’s why I spend my spare time watching Doris Day movies.

Lungs at Off the Wall Productions