This Sewickley spot excels at its self-described "fine Italian and American cuisine in a casual, relaxed atmosphere"

At first glance, 424 Walnut is similar to a restaurant type that abounds in the Pittsburgh market: in the words of its own Facebook page, it offers "fine Italian and American cuisine in a casual, relaxed atmosphere." With such a formula, which relies on broad appeal rather than niche-market verve, an establishment that doesn't exceed expectations on every front — menu, preparation, service and atmosphere — risks a quick fade into the walnut-stained woodwork.

424 Walnut, named for its address in Sewickley, is the new venture of chef-owner Jimmy Zipparo, who previously co-owned the popular Sweetwater Grille in the same space. His new venture is a restaurant that punches above its weight with a solid menu, a confident kitchen, friendly yet professional service, and an attractive, comfortable dining room.

The space, long ago transformed from a repair garage into a modestly upscale restaurant space, is airy with high ceilings and big front windows. Wood and glass half-walls break the large floor up into cozy nooks, and a cheerful bar lines one wall. The lone TV above the bar didn't intrude on the dining experience, which offered plenty of booth seating, while being appointed with subtle signs of sophistication that suggested the food would be a cut above. 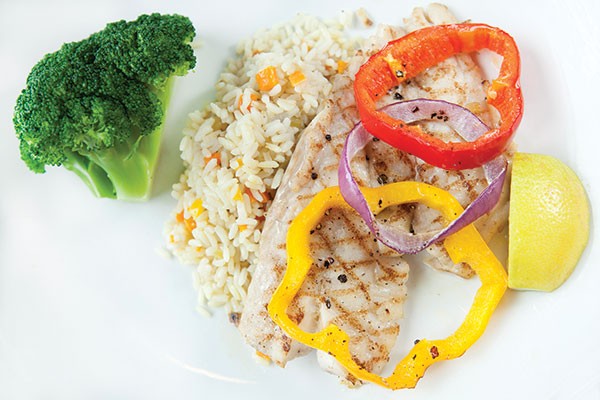 And it was. Beans-and-greens, crab Hoelzel, chops and pasta are all essential ingredients of a typical, old-school Pittsburgh menu. But 424 Walnut has devised a sort of curated version of the local canon, unafraid to omit fried zucchini or chicken parm. Even items as ubiquitous as steak salad and strip steak were given updated, thoughtful touches, such as roasted potatoes on the former and roasted-garlic truffle butter on the latter. Reading this menu raised our confidence that the kitchen wasn't merely painting by number, but that Chef Zipparo knows what he does best.

The night of our visit, the specials were particularly appetizing. The pasta special, French country linguini, was a wonderfully conceived amalgam of diced ham and spring vegetables in a "light parmesan cream" sauce. The Alfredo-like sauce was, in fact, a touch heavy, but the ham did a lovely job of flavoring the dish without smothering the vegetables, which ranged from tender-crisp asparagus to still-bright peas and wilted baby spinach, all infused with bright herbs and mellow chopped shallots. This homey dish, with its Easter-y ham and nary a root vegetable, was beautifully aligned with the hopeful end to a long, cold winter.

Another special, chicken Romano, can be a bit of an afterthought: plain chicken breast pan-fried in a cheesy batter that doesn't try too hard to do too much. But 424 Walnut's version was superb, with extraordinarily tender, succulent chicken in a coating balanced between egg and Romano cheese factors. Enhanced with lemon butter and white wine, the effect was complex, savory and rich, but never soggy or heavy.

From the daily menu, the Colorado lamb chops stood out. We ordered just one at a not-insignificant price (two chops are also available), but this early-spring treat was worth it. The chop was charred without, prettily pink within and lightly flavored by an olive oil-rosemary rub.

Even more of a standout were the vegetables. A mixture of zucchini, red peppers and thinly sliced shiitake mushrooms, this was exemplary of the vegetable medley, which is so often no more than a hash of, seemingly, whatever happens to be in oversupply in the kitchen. Here, the combination of vegetables seemed deliberately and carefully chosen, and each was cooked to a suitable doneness and lightly seasoned in a simple, buttery coating. Roasted red-skin potatoes were near perfect — crisp and creamy, and with a salty exterior mated to the mild interior.

We were intrigued by beans-and-greens served over penne with jumbo Gulf shrimp and hot Italian sausage. As aficionados of beans-and-greens, we anticipated this as a worthy upgrade of one of our favorite Italian appetizers to the status of a hearty meal. Strangely, however, not a single bean was in evidence in our dish, leaving the flavor profile, not to mention the texture, lacking in the cannellini's essential, creamy earthiness.

After all this, we still couldn't resist 424 Walnut's housemade desserts. Red-velvet cheesecake played to the strengths of the tiring red-velvet craze, with creamy cocoa flavor, cheesy tang and a luscious texture. Key lime pie delivered a suitably puckery ratio between sweetness and citrus tartness.

424 Walnut offers a solid, satisfying take on the kind of food Pittsburghers have loved for years — and gives us reason to keep on loving it.